Welcome back to Random Wrestling!  It's been a long time since I have done one of these posts, it's not for the lack of watching wrestling, I've had a lot to watch I just have just enough other stuff to post about is all.

Wahoo McDaniel is the referee, from 1977 this is a six minute clip filmed on 16mm.

Joined in progress it appears as though the Anderson's are the faces.  Everyone is busted open as Gene takes a beat down until making the hot tag to Ole.  Ole cleans house but then is thrown into Wahoo.  In a very dangerous bump, Flair has Ole up for a standing suplex and trips over Wahoo and I thinks Ole was supposed to fall on Flair but instead fell on his head, but still manged to get the pin.


Flair and Valentine then beat down everyone including Wahoo until someone makes the save.  The Anderson's won the titles, but Ole had to be stretchered out after taking a spike piledriver.

Tommy Young is your referee with David Crockett and James E. Cornette calling the action.

Excellent tag team encounter in front of the always hot crowd that Mid Atlantic Wrestling had at that time. Story of the match is very stereotypical but I love it!!  Anderson beat down the Express who fire back time and time again only to be stopped by the Anderson's.  Finally the Express clearly have the upper hand when Arn low bridges Gibson causing him to fall backwards over the top rope drawing the disqualification.  Anderson's then beat down Gibson and Morton on the floor until the faces clear the dressing room to stop them.

Commentary by Bob Caudle and Teddy Long with Randy Anderson the man in charge in the ring.

I have never heard of the Minnesota Wrestling Crew II, it's two masked guys managed by Ole Anderson.  They have blue pants and matching masks!  Apparently the men under the masks were the team of Mike Enos and Wayne Bloom, a formidable tag team in there own right.

Match wise the Crew II work like the Anderson's working the arm, but they just can't seem to keep the upper hand on the Steiner Brothers until the work Scott's previously injured arm.  Of course they have to beat it against the guard rail a dozen times first. Wrecking Crew pick up the count-out victory after a hammerlock slam on the floor onto Scott.

I couldn't find any matches on You Tube of Lars and Gene Anderson teamed together however I did find this clip from Georgia Championship Wrestling spring 1980 where Ole & Lars posed as the masked Avengers surprising Tag Team Champions: Ivan Koloff & Alexis Smirnoff.  I never knew that Lars and Ole teamed up together so this is quite and exciting discovery for me!  Apparently Lars and Ole are two time NWA Georgia Tag Team Champions!

This clip is from Georgia Championship Wrestling July 26, 1980 just a few days after Lars and Ole split.  Lars talks about it post match.

Rough timeline of the teams 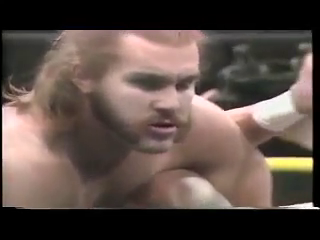 Bryant Anderson is the son of Ole Anderson, he wrestled for WCW in 1993 and Smoky Mountain Wrestling 1994 - 1995.  This is the only match that I could find on You Tube of Anderson.  It is from WCW Worldwide airing March 19, 1994.  Anderson had a good look and wore the classic Anderson maroon boots with gold stripes. 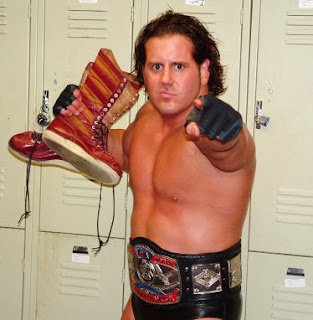 Brad Anderson is the son of Gene Anderson, he began his career under a mask in 1988 for Jim Crockett Promotions as Agent Steel.  He also competed as Zan Panzer, Viper, and as Brad Anderson.  He worked matches for WWF, WCW, SMW, and other promotions.  His last match to date is actually the only match I have ever seen an Anderson wrestle live in.  NWA Legends Fanfest  August 8, 2009 in Charlotte, NC he defeated "Man Scout" Jake Manning.  I found a few matches from various times in his career on you tube.

Doug Furnace vs. Zan Panzer
from World Championship Wrestling May 26, 1990