In 1989 Antonio Inoki and New Japan Pro Wrestling had worked out an agreement with the USSR where several of there amateur wrestlers traveled to the New Japan Dojo to train as professional wrestlers. 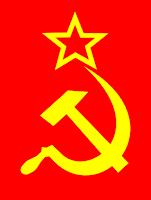 Two of them, Salman Hashimikov and Victor Zangiev were stand outs and would go onto wrestle for NJPW and later UWF-I from 1989 - 1994.  They represented the Soviet Union at Starrcade 1990 in the Pat O'Connor Memorial Cup tag team tournament.  On May 25, 1989 in Osaka, Japan Hashimikov defeated Big Van Vader to win the IWGP Heavyweight Championship losing the title to Riki Choshu on July 12, 1989.

Because of this relationship on December 31, 1989 Antonio Inoki and NJPW were able to run, what was billed as the first ever Professional Wrestling event in the USSR at Luzhniki Stadium in Moscow, Russia.  At the time the venue was called the Central Lenin Stadium. 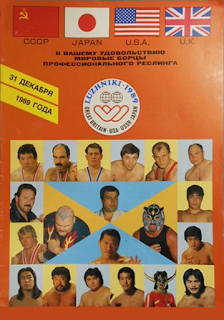 The card featured 9 matches with 20 wrestlers from 4 different countries, nine wrestlers from Japan, seven from USSR, three from the United States, and one British guy under a mask.  What's surprising is that of the seven matches featuring Soviet competitors they won three, lost three, and had a draw on one.  I would have thought, being in the Soviet Union and considering the political turmoil at the time the Soviets would have dominated their matches.
What I think is remarkable is the fact three American wrestlers including a former Olympian in Brad Rheingans appeared on the card.  It is also kind of surprising that the other two Americans are Bam Bam Bigelow and "Raging Bull" Manny Fernandez.

I have heard a lot about the Inoki lead World Wrestling Peace Festival in North Korea that aired on PPV as Collision in Korea.  It was very controversial for Americans to appear on this show, and I feel like it had to be the same for them to appear on the show in Moscow.

Now there are a few independent companies in Russia, Colt Cabana did a tour there in 2015 and the WWE ran House Shows there in 2012 & 2013.  At the time of the event the Iron Curtain was still up and the Soviet Union never had events like this.  Even though the show wasn't that great, it was still a monumental event in the history of wrestling.

You can buy the show at the following websites:

Wrestling Epicenter Store has the entire show available for sale on DVD for $5.99.