For reasons unknown I just had the urge to watch a classic feud from my childhood, one that is underrated and doesn't get talk about enough, Tito Santana and Greg "The Hammer" Valentine's battle over the Intercontinental Heavyweight Championship. 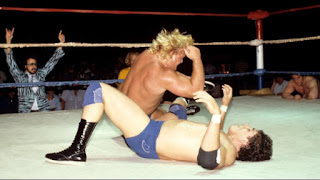 Tito first won the championship from Don Muraco on February 11, 1984 in Boston, MA at the Garden.  He held the title for 226 days losing it to Valentine in London, Ontario for Maple Leaf Wrestling on September 24, 1984.  Valentine would hold the title for 285 days when Santana regained it inside a Steel Cage on July 6, 1985 in Baltimore, Maryland.  Santana's second and final reign came to an end on February 8, 1986 in the city he first won it, Boston, when "Macho" Man Randy Savage captured the crown. 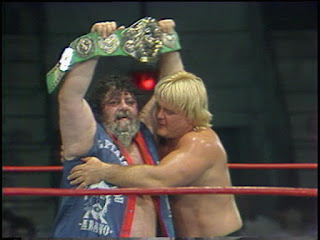 So I check the Old School section on the WWE Network and much to my surprise none of the Santana vs. Valentine matches are on it.  I check All Star Wrestling, Prime Time Wrestling, and even Tuesday Night Titans and only TNT has episodes from 1984 / 1985 and none of them featured the title change. 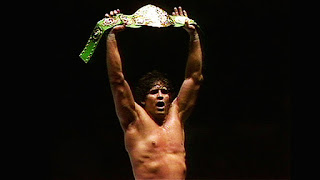 How could this be!?! Whenever a title change took place Gorilla Monsoon would say, history has been made, and yet the WWE doesn't have footage of these matches on their network.  The matches are on YouTube!

Digging deeper into the WWE Network if you go to section In Ring, then WWE Home Video Classics, look for Match Compilations and finally WWE Grudge Match Mar 27, 1986.  This is an old coliseum home video release.  This tape has three segments looking at the feud between Valentine & Santana starting with Valentine winning the championship from Tito and ending with their cage match from Baltimore where Santana recaptured the title. 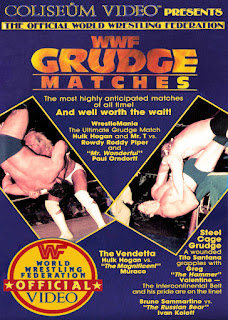 Here are the links to the matches on YouTube:

On Grudge Matches this match is clipped down to four minutes, YouTube has the complete match. In an interview from a couple years ago Santana was asked what happened to the broken championship and he replied that he threw it in the trash that night at the arena in Baltimore.

On the WWE Network is you search Tito Santana vs. Greg Valentine there are 12 matches that come back featuring both men, some are tag matches but there are four in particular that I want to point out.

TNT: Tuesday Night Titans July 17, 1984
Santana is Champion and this features a non-title match between the two.  Valentine is interviewed by McMahon before and after the match and it's worth watching

WWE Old School October 22, 1984, at Madison Square Garden
Valentine is champion, this match is short but they beat the hell out of each other! Also it sets up the return match that happened the next month.  This is also Santana's first match back after surgery on his knee, also his return match against Valentine after losing the championship to him in September.  Valentine injured Tito causing him to have the surgery.

WWE Old School November 26, 1984 at Madison Square Garden
Valentine is champion and this is the best match between the two on the card during this time frame.  It goes nearly thirty minutes and really shows that these guys can work their ass off.  This match was the main event of the card, Hogan was not on the show, and it was a sell out.  That's how big this feud was they main evented and sold out Madison Square Garden.

WWE Old School March 17, 1985 at Madison Square Garden
Valentine is champion and this is a Lumberjack match but it's really not the over the top Lumberjack style match that I am used to that WWE has put out the last 20 years.

My overall reaction to these series of matches is that these guys beat the hell out of each other everytime they were in the ring together.  A lot of people only know Tito for his time in the WWE in the 1990's and they are missing out on what he could do in the ring.

Santana and Valentine were first in the ring together Mid-Atlantic Championship Wrestling on December 3, 1978 in Charlotte, North Carolina.  Granted this was a 24 man battle royal, but I'd like to think that they mixed it up.  Six months later they were in another battle royal together, this time for the WWF at Madison Square Garden on June 4, 1979.

They wouldn't be in the ring together again until March 31, 1984 at the Spectrum in Philadelphia.  In this match Santana was defending his Intercontinental Championship against Valentine and the match ended in a time limit draw.  The most recent match against each other was an amazing 33 years later on February 25, 2017 for the Superstars of Wrestling Federation in Totowa, New Jersey where they battled to a no contest!

Currently Santana is 66 years old and Valentine is 68 years old and they both had matches in late 2019.  If they wrestled against each other again this year I'd watch it.

Until next time!
Posted by Michael J. Labbe at 8:29 PM