A couple years ago I wrote a post about the Dr. Death's Abysmal WWE Run.  After he left the WWE in March of 1999 he wrestled a single match in All Japan Pro Wrestling at the Giant Baba Memorial Show before he turned up in World Championship Wrestling. 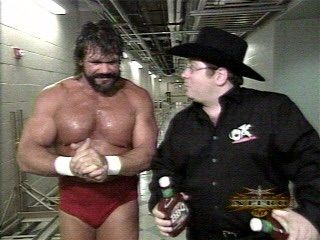 "Dr. Death" Steve Williams was shown walking into the arena Ed Ferrara who was doing his Jim Ross impersonation and going by the name Oklahoma.  Later that night Williams and Oklahoma joined the commentary team during a Pinata Match.  Eventually Williams interrupted the match laying out Silver King, El Dandy, Psychosis, Juventude, and Villano.

That's right, Williams first official match in WCW is a Steel Cage match against the lead singer for the band Misfits, and he lost.  I'm a fan of the Misfits, they've got some great tunes.  At this time they were teamed up with Vampiro. 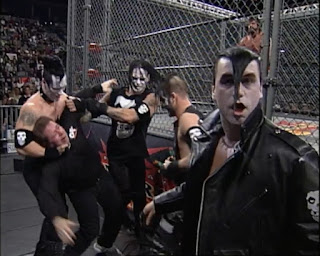 Doc dominated and the finish came when he threw Only into the corner by the cage door and Only fell to the floor to win by escaping the cage.

While Doc was dominating the Luchadors, Vampiro and the Misfits jumped Oklahoma on the floor.  Doc pinned one of the Villano's after and Oklahoma Stampede

Oklahoma wore a microphone and called the action during the match.  Doc dominated, Oklahoma got beat up for a spell.  Then Doc got Vampiro down with the Stampede and Oklahoma got the pin for his team.

Billed as a Powerbomb vs. Suplex match that Williams lost in two and a half minutes.  Such a friggin disgrace.  Williams was huge in the Mid-South region and in New Orleans and he loses in short order in a crap gimmick match.

Doc won this match by DQ when Berlyn aka Alex Wright hit Williams with his cane, something he attempted to do behind the referee's back but failed.  Doc and The Wall beat the tar out of each other for a couple minutes then the DQ.  This match was more about The Wall and Berlyn breaking up than getting Doc over.

This match had a couple stipulations including Oklahoma in a cage above the ring and if Vampiro won he'd get five minutes in the ring with Oklahoma. 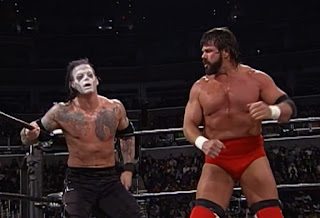 Doc lost this by DQ in just under five minutes which granted Vampiro 5 minutes with Oklahoma.  Security removed Doc from the ringside area and Oklahoma got his ass kicked.

This was the last match that Williams had in WCW.  In total his run lasted 24 days, he wrestled six matches winning three and losing three primarily feuding with Vampiro and the Misifts.  Not a single match in this run went over five minutes.  It was uneventful and a sad closure to Doc's major US coverage.

He would spend the next three years wrestling full time for All Japan Pro Wrestling.  In 2003 he wrestled a couple house show matches against Lance Storm in the WWE, had a program with MLW competing a War Games match. 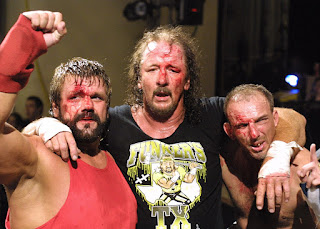 Sadly in 2004 he was diagnosed with throat cancer and underwent surgery.  He was cancer free in 2005 and returned to wrestling competing on the indies.  In 2007 he helped do some training in OVW even tagging with fellow Oklahoman Jake Hager for a couple tag team matches.  I think this explains why Hager uses the Doctor Bomb.

Until next time!
Posted by Michael J. Labbe at 7:56 PM