At the Boneyard Match at WrestleMania XXXVI we saw a version of the Undertaker that we haven't seen in a long long time.  It was an awesome match, even my wife who doesn't care for wrestling enjoyed it.  Sunday after night 2 of Mania was over they had a First Look at The Undertaker: The Last Ride.

This leads me to believe that this will be Taker's last year in the ring, some thing the Boneyard match was his last.  Undertaker debuted at the 1990 Survivor Series so I think his last match should be at the 2020 Survivor Series 30 years later.

This was a marathon television taping of Wrestling Challenge, Superstars, & Action Zone.  I attended this show with my buddy Jay and his brother Scott. Undertaker appeared twice this night.  Summerslam 1995 was just 12 days away which featured  casket match between Undertaker and Kama.  The first appearance saw Undertaker at ringside with Paul Bearer and the casket he made for Kama being interviewed by Dok Hendrix.

The second time we say him that night was the main event of the evening in a dark match, and the 26th match of the night.  In this match The Undertaker defeated Kama: The Supreme Fighting Machine in a casket match. 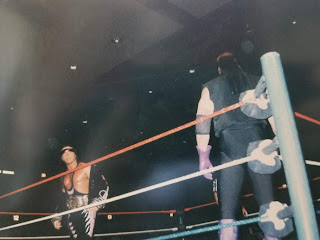 Surprisingly this was not the main even of the evening, that honor went to HBK vs. Smith.  Bret was out first and then Undertaker took and exceptionally long time to get to the ring.  He wasn't wearing his hat or coat and just his wrestling gear.  It was a good match and in the end Bret Hart retained his championship by count-out after Goldust ran down and gave Taker a piledriver on the floor. 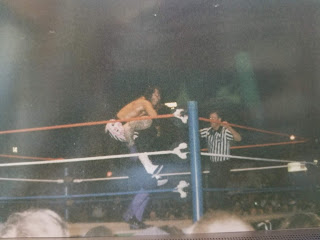 I took these pictures on a film camera back in the day and then took a picture of the picture with my camera phone to post them here.

The Undertaker vs. Kane with Paul Bearer

I really don't have to say a whole lot about this event, it's where the Austin era began!  This was my first Pay-Per-View, we had seats in the front row of the balcony, but Jay and I didn't care.  We were overlooking the entrance way so we got a great view of Taker's entrance with the druids. 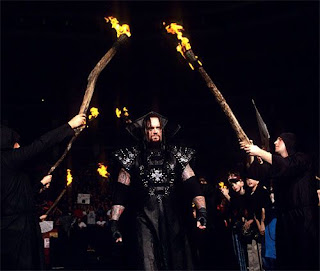 This was the first epic battle between the Brother's of Destruction, this was also the first time that Kane tombstoned Pete Rose.  Undertaker defeated Kane after three tombstone piledrivers, the last one looks real bad as Kane's head was low.  After the match Kane tombstoned Taker on a steel chair.  This win seven on the Undertaker's WrestleMania win streak. 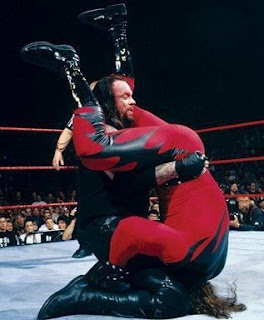 The Undertaker vs. Muhammad Hassan with Daivari

I attended this show with my buddy Rood  Hassan was a talented wrestler who was saddled with a wrong gimmick at the wrong time.  After this match he would only have two more matches in the WWE before leaving wrestling. 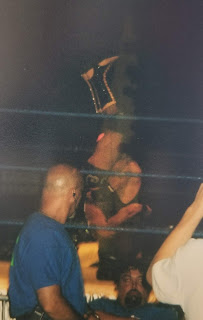 On this night even with the help of Daivari and the Shane Twins in black garb Hassan fell victim to the tombstone piledriver. 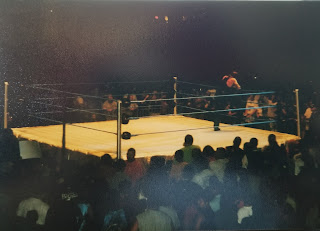 I took these pictures on a film camera back in the day and then took a picture of the picture with my camera phone to post them here.

The Undertaker vs. Randy Orton with "Cowboy" Bob Orton

This was the first time WWE ever had a show at this venue, also two days before this show I bought my first digital camera and sitting in the fourth row I got some great shots!  I went to this show alone, and it was a last minute decisions because two days later my buddy Rood and I went to Boston for Monday Night Raw.  I took these pictures. 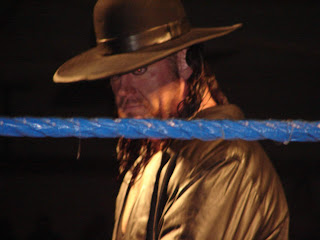 This was a super fun show with a lot of great talent on the card.  Taker and Orton main evented in a very good match that saw Undertaker get the win after a tombstone piledriver. 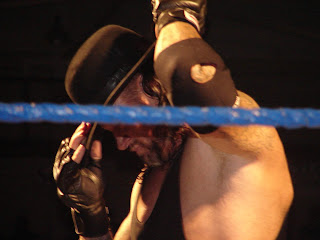 On the way home I stopped at Burger King on the highway in Litchfield, I used to work there.  My camera battery was beyond dead so I have no proof however, I met Sylvain Grenier, Kid Kash, Steve Keirn, and Arn Anderson! 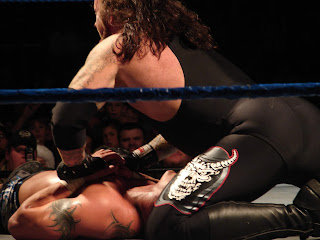 I attended this show with my buddies Jay & Rood, we bought Silver Packages from WWE as we had heard the rumor that this was going to be Ric Flair's final match and we didn't want to miss that. 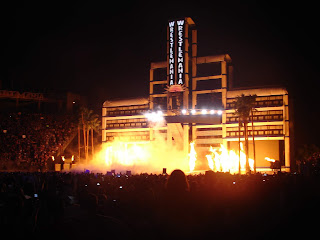 You can read all about our adventures in these two posts: this first post was written in 2008 and posted on Facebook Note.  The second post was written a few years later for a different blog of mine.  You can read all about out travels down, the hotel, going to Universal Studios, a crazy bloody indy show, The Hall of Fame, and of course Mania itself.

This was an amazing night of wrestling, we had awesome seats, and it was a truly excellent adventure!  Taker's entrance was amazing!  The best one that I have experienced live complete with flames shooting 40 feet into the air!  Beyond words. 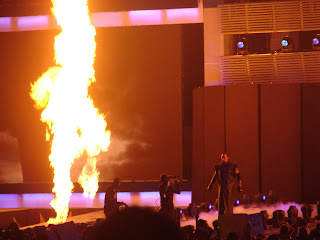 The match was the main event and it was well deserved.  The Undertaker captured the World Championship after submitting Edge.  This was win sixteen of his WrestleMania win streak.  I took these pictures from my seat.

Casket Match: The Undertaker vs. The Big Show 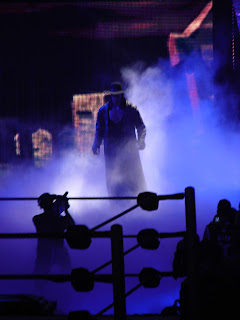 I enjoyed this show, but if I'm being honest when I sat down the write this I had remembered every Undertaker match except this one.  I remember this show and have talked about it often, I can recall every match except this match. 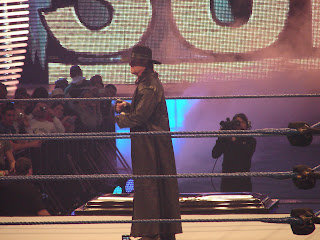 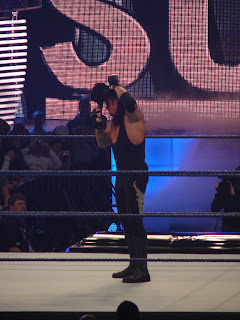 Undertaker got the win when the casket was standing upright and Taker irish-whipped Big Show into the open casket which fell over and the lid fell shut.  This is probably why I don't remember the match.  I took these pictures from my seat, there are more at the bottom of the post. 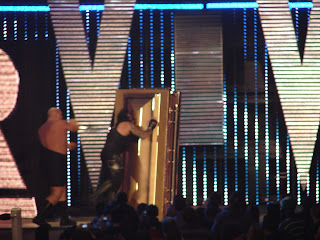 All in all I have seen the Undertaker wrestle live seven times.  His record is 6 - 1 with his only loss being by count-out.  I saw his win two casket matches, compete at two WrestleMania's and watched him win the World Heavyweight Championship.

If this is Taker's last year and if I never get to see him live again I'm okay with that.  I feel very fortunate that I got to witness Taker live several times and in some significant matches at that. 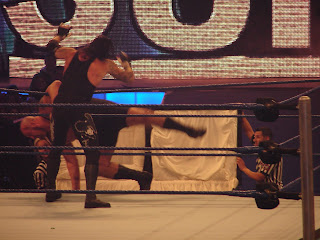 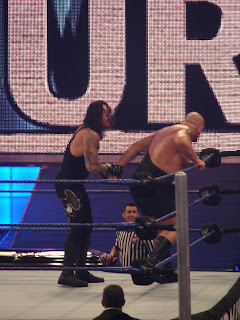 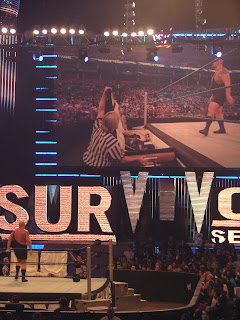 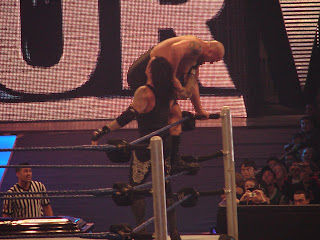 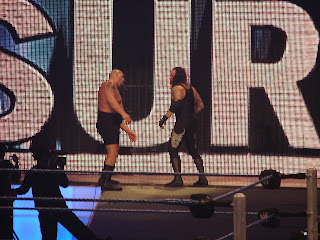