Tully is one of my all time favorite wrestlers and with these additions it brings my signed card total up to nine.  The card one the left is from the 1985 Wrestling All Stars set, the next two cards are from the 1986 Monty cards.  Finally a new card from just last year from the Starrcast II card set. 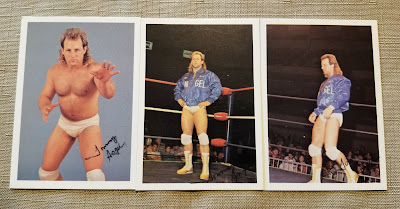 I was excited to get these cards back!  These NWA Wonderama cards are my favorite cards to get signed, anytime I can add some to the collection is a great day.  Tommy Angel was a journeyman wrestler that hasn't had a match since 1994.  I met him in 2009 at NWA Legends Fanfest in North Carolina but I didn't have cards on me.  He wasn't advertised but was at the Hall of Heroes banquet. 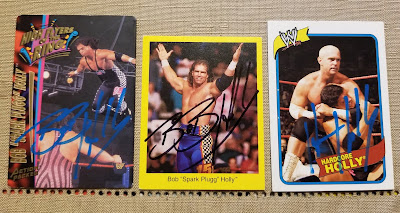 This is one of the fastest turn responses that I have ever had, right there with Tim Prichard.  I mailed these on April 22nd and got them back on April 30th.  I really like how he signed the cards in he blue marker, it looks so cool.
The card on the left is from the 1995 Action Packed card set, the middle card is from the 1997 Cardinal WWF Trivia Game.  The card on the right is from the 2007 Topps Heritage set.

Until next time
Posted by Michael J. Labbe at 7:31 PM