Some more signed cards I got through the mail 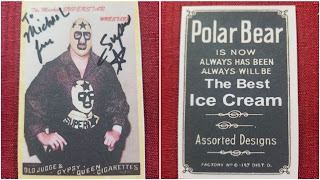 This is a first for me, this is a custom card that I bought off eBay.  The card is just a bit smaller than a normal sized trading cards, it has decent thickness and a really cool retro look to it.  The seller is 2015greatcustoms and with 12,219 positive feedback I took a chance on buying a couple cards from him.  He currently has almost 10,000 items for sale in his eBay store, I linked his account on his name. 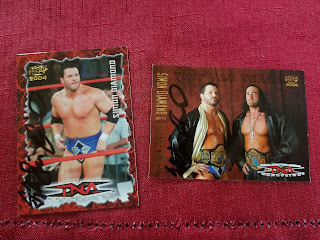 Both of these cards came from TNA's first card set released in 1994 by Pacific Cards. Now I just need to get Johnny Swinger to sign his side of the card. 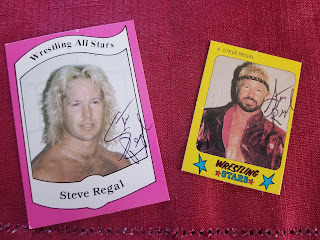 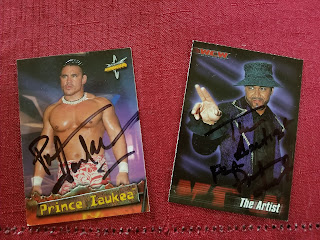 I mailed these cards to the Prince, not only did he sign my cards but he also sent along an inscribed 8 x 10 photo, which I think is really cool!  The card on the left is from the 1999 WCW Embossed card set and the card on the right is from WCW's last trading card set from WCW Magazine released in 2000. 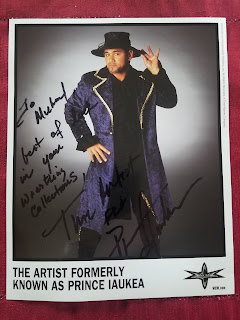 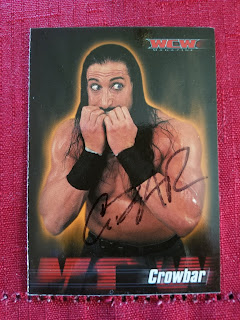 It's not usual for me to send cards to a wrestler to sign for me twice in a short period but I found that I had this Crowbar card from the final WCW set that was released in 2000 in WCW Magazine.

Until next time!
Posted by Michael J. Labbe at 9:48 AM