I'm still on a big 1980's WWF kick as I've been loving the Old School section of the WWE Network.  Most recently I started watching Rockin' Robin vs. Sherri Martel.  There are four matches on the Network including Robin defeating Martel in Paris for the WWF Women's Championship. 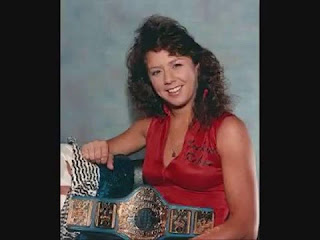 I ventured to YouTube next to watch Robin wrestle Madusa Micelli, Debbie Combs, Sue Green, Luna Vachon, and Candi Devine in other promotions with the Vachon match being in Japan.

Robin was trained by Nelson Royal in 1986, debuting in 1987.  She is a second generation wrestler, the son of Grizzly Smith and sibling of Jake "The Snake" Robert, Sam Houston, and former sister-in-law of Baby Doll Nickla Roberts. 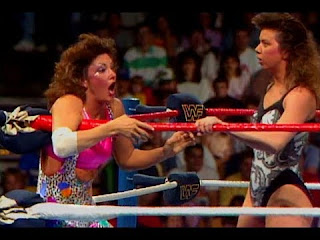 Robin won the WWF Women's Championship on October 7, 1988 and is recognized by the WWE as holding the Championship for 501 days until February 21, 1990 when the division was deactivated until December 1993.

One thing is certain is that Robin was a terrific wrestler!  Every match that I watched was a great match.  She was very aggressive, athletic and very hard hitting.  Her matches with Martel were dynamite!  I realized they wrestled each other nightly for over a year practically but they had chemistry.

I'm very curious what the next adventure from 1980's wrestling I will go on next.