This vacation started out the same with the only major promotion in the area, C*4 wrestling not having a show listed September.  I wasn't able to find may other promotions in the area, but C*4 is the PWG of Canada and was the one I wanted to go to the most.

In May Ethan Page wrestled at Limitless and I ask him if he knew of any and he said that he didn't.  I messaged a few wrestlers in that area including Stu Grayson, former Super Smash Brother now known as the Dark Order in AEW.  On August 7th he messaged that C*4 would be running on Friday September 20th, the day we would be arriving in Ottawa.  C*4 made it official after their August 16th show.

Finally it was going to work out to hit up a show on vacation and to check a major box off  the wrestling check list, attend a show in a other country, and a C*4 show.

The wife, Wesley, and I headed out early the morning of Friday September 20th arriving at out AirBNB in Cantley, Quebec just after 4pm.  After unloading we sat around a bit and then I headed out to make the 30 minute drive back to Ottawa and St. Anthony's Hall.  I found the venue easy enough and parked across the street in the city lot.

There was a huge crowd lined down the building, but once the doors opened up they very quickly got everyone inside the building.  Fans were showing up through out the evening and I would wager over 400 were there by shows end.  The front row VIP sold out very quickly in advance, I ended up with General Admission, only $20! 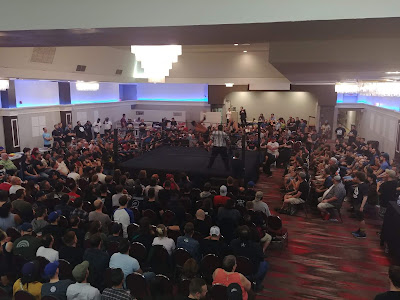 Before the show started a few wrestlers were out at their tables.  I saw Lufisto for the first time since 2000 at an EWA show in Maine.  I had a couple posters from that very show that I gave her and she was pretty shocked to see them.  I snagged a photo with her and got two cards signed.  I also got a picture with Alex Zayne before the show, I was excited to see him live for the first time.

I tried to take pictures, they didn't come out that well so I gathered these from the internet, full credit to those who took them.

They had a pre-show match that I wasn't expecting, that was nice.

Fun opening match, I wasn't familiar with either but they worked hard and were very entertaining.  Lots of good action that really fired the crowd up.  I was most impressed with Anthony Gaines, he's a Buffalo guy so I'm sure I'll see him again one day. 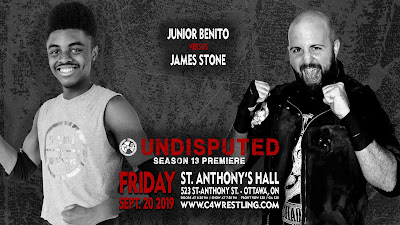 The fans loved them some Junior Benito and I can see why.  He's a young kid who is excellent in the ring and in a few years will be a well known name all over.  It was my first time seeing both of these guys in person and they meshed very well in the ring together.  Stone pinned Benito after a buckle bomb into a gotch style piledriver.  Hell of a finish! 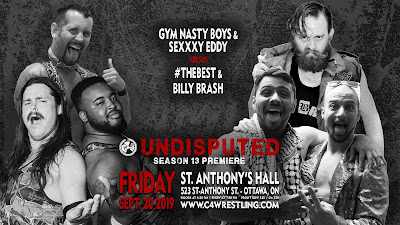 I've seen Eddy a few times in the past, but this was my first time seeing everyone else live.  The Gym Nasty's are deceptively athletic and agile.  I mean holy cow Timmy Lou was tumbling all over the ring and hit a picture perfect shooting star press.  Billy Brash is also damn good!  He was flying off the top rope like it was nothing, I didn't expect that at all.  More guys I'm hoping Randy brings into Limitless Wrestling.

The finish came when #The Best pinned Eddy with a school boy.

Post match Eddy cut a promo about being on the first few C*4 cards and then hasn't been back for 10 years until now.  He went on saying he doesn't know if has it in the tank anymore to compete with the young talent in C*4. 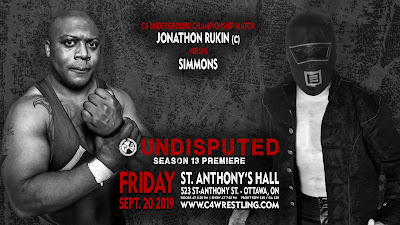 Early in the match Rukin hit a dropkick but he landed awkwardly on his left shoulder and appeared to legit injure himself.  He was hampered by it for the rest of the match.  To be blunt the crowd didn't seem to care at all about this match until Simmons pulled out a couple chairs and a door, then they popped.  Simmons set the doors up on two chairs and laid Rukin on it, who moved when Simmons came off the second rope putting himself through the door.  Rukin then choked out Simmons winning by referee stoppage. 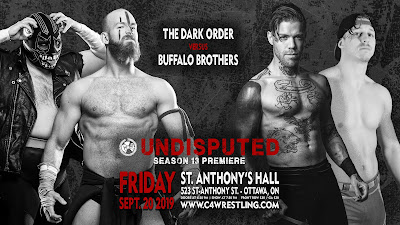 TAG TEAM WRESTLING!! That's what we got with this match, a damn good tag team wrestling match.  My favorite match of the night.  This was my first time seeing the Dark Order live and they are such an amazing tag team.  I've seen Blackwood many times here in Maine for Limitless Wrestling but I can't recall ever seeing Bennett before but I'm hoping to see him again.

I can't do this match justice trying to write up a review and I didn't want to look away to make notes during it.  There was a lot of back and forth action, quick tags, tandem offense for both teams.  Including the Dark Order busting out a 450 splash / cannon ball combo.  Dark Order picked up the win pinning Bennett after fatality. 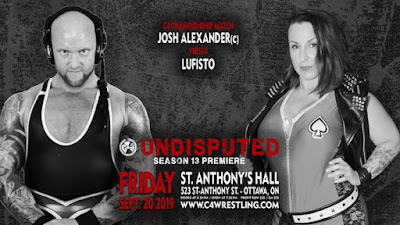 I've been watching Alexander for years but this my first time seeing him live. I expected a barn burner of a match and they did not disappoint.  The beat the crap out of each other for over 20 minutes including early in the match when they sat on chairs in the ring exchanging strikes.

The action was inside and outside the ring including an unbelievable finishing sequence that saw Alexander hit a blue thunder bomb, powerbomb backbreaker, and a Jay driller before finally getting the win and retaining his championship.

After the match Lufisto got a standing ovation for the very appreciative crowd.

Intermission followed this match was needed to help the audience catch their breath.  During intermission I got my Stu Grayson to sign a couple cards for me and got a picture with him.  I also got a photo with Josh Alexander.  I bought The Gym Nasty Boy's trading card and they signed it for me as well.

"MVP" Michael Von Payton was scheduled to wrestler FTM but was unable to attend.  I wasn't familiar with either of these competitors but they had a decent stiff big guys match.  FTM got the win with ape shit. 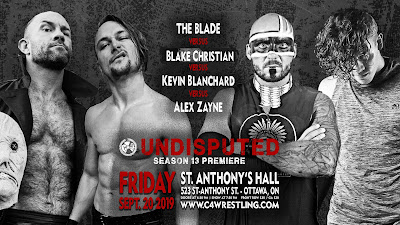 This was a wild and crazy match and I loved it.  Lots of high flying by Zayne and Christian.  At one point Blade was bent at the waist and Zayne hit a shooting star knee drop on Blade's back.  Blade got the win after hitting Zayne with a standing superplex off the top rope and a jump spinning tombstone piledriver. 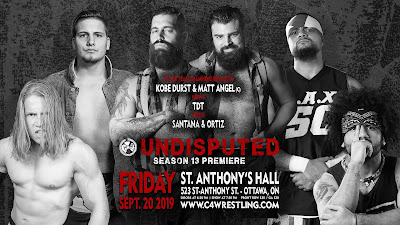 What a way to end the night! Way too much action for me to describe just go and watch this match.  Tabarnak de Team is one of my favorite tag teams on the planet right now.  We got them in Limitless Wrestling for three matches in 2017 but visa issues are keeping them out of the States right now.  I have no doubt that someone will be signing them sooner than later, I'm hoping AEW.

A lot of action in and out of the ring.  At one point EYFBO & TDT were out of the ring and Durst and Angel did something I've never seen before.  One held the other in the backpack position and then they both dove through the ropes, it was friggin cool as hell!


They broke some doors and a table and fought around the building.  In the end the champs retained the title after putting Ortiz through a door that propped up on chairs. 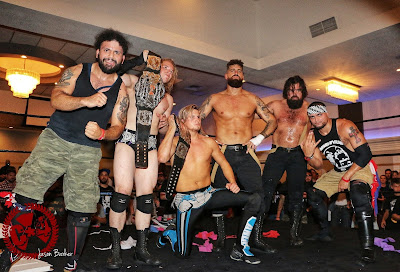 Post match EYFBO cut a promo saying goodbye for now, their history wrestling for C*4 and put over TDT as being one of the best tag teams.  They also put over Durst & Angel.


Before the show started I was chatting with a fellow fan, turns out he's the owner of Inter Species Wrestling Mike Rotch.  Really cool guy who I chatted with during intermission and after the show.  He helped out getting me a chance to talk to TDT and get a photo with them.  Limitless Wrestling had made trading cards of TDT and I had two, I had a third one coming in the mail but I didn't get it in time.  So I have them both a card, hopefully I can get mine signed one day.  They were very, very appreciative and we chatted for a few minutes.  Also got a photo with them, they were super cool guys.

Tonight exemplified why I love professional wrestling.  Here I was 400 miles from home in another country at a wrestling show by myself but I wasn't alone.  I chatted with a lot of fellow fans as we all watched a kick ass show together.  C*4 Wrestling was cool a shit too.  I messaged them before the show and they held a ticket for me at the door and after the show was over messaged me asking if I had a good time.

Until next time!
Posted by Michael J. Labbe at 9:37 PM