Friday night September 6, 2019 Limitless Wrestling presented their 4th Anniversary show Know Your Enemy emanating from the historic Portland Expo!  I was so excited to have front row for this show because this is one of the most historic buildings for wrestling in Maine.

Built in 1914 it is the second oldest arena in continuous operation in the United States.  On March 5, 1929 World Heavyweight Champion Gus Sonnenberg defeated Ned McGuire in two straight falls.  On April 2, 1945 Leo Numa defeated Manuel Cortez by disqualification when referee Babe Ruth called for the bell.

The first time I can find that the WWWF ran at the Expo was July 19, 1966 with King Curtis Iaukea defeating Johnny Valentine in the main event.  In his book Bob Backlund talks about wrestling then WWF Champion "Superstar" Billy Graham to a blood double count-out on December 6, 1977.   For over 11 years the WWWF/WWF ran month shows at the venue.  In 1978 the WWF would move to the newly opened and larger Cumberland County Civic Center, now Cross Insurance Arena.  My dad went to the matches here regularly and saw the legends like Graham, Backlund, Putksi, Andre the Giant and others.

I myself have only attended one wrestling show at the Expo, which was the last wrestling show the venue hosted.  March 16, 2003 Maine Event Wrestling featuring Robbie Ellis, X-Pac, Brian Christopher, Raven, Mike Quackenbush vs. Reckless Youth in a 2 out of 3 falls masterpiece and The Fabulous Moolah and The Great Mae Young in tag team action against Don Montoya & Towel Boy Adams.  I sat in the bleachers on this night.

Alex and my son Canaan headed down to the expo together.  I was shocked at the length of the line when I got to the door.  They had to broken down to VIP, Front Row & Floor GA, and bleacher GA.  I loved the set up and the Limitless Wrestling ring skirt, it just look so good.  I also liked that there was plenty of room for the wrestlers merchandise tables away from the seating. 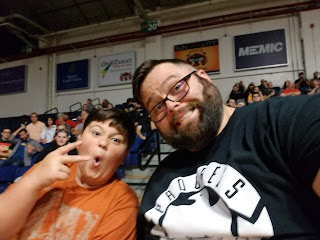 I picked up a few packs of the Limitless Wrestling trading cards and in total managed to get five cards signed.  I'll post about them another day.  I didn't take many pictures of the show because I just wanted to watch the wrestling.  Not to mention I knew the pictures weren't going to come out well because of the lighting and that I don't bring my camera with me.  These photos are courtesy of @wrestlechick207 on the twitter.

This was a hell of a fight and what a great way to open the show.  It got the crowd to their feet for the entire contest and these guys beat the hell out of each other.  Maff got Romero in a torture rack position and gave him a burning hammer right on the top of Ace's head!  It was sick, in a good way!  Ace the pin after a monster clothesline.  I hope we see Maff back in a Limitless Wrestling sooner than later. 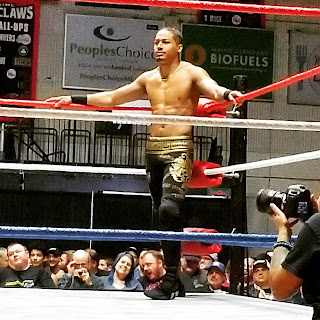 AR Fox was supposed to be Casanova's opponent but he simply no showed.  Hirsch was supposed to be in the scramble match but I was glad to see her in this match instead.  It was a great match, I felt that Hirsch held control for the majority of it but she fell victim to Casanova's scissors kick. 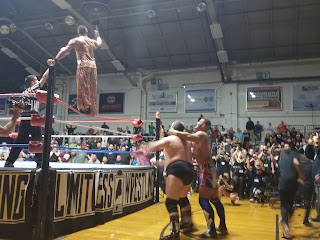 This match lived up the the hype that I had built in my mind.  First off I love Hart's and Smith's entrance theme, it's just a great tune.  This match was basically a tornado match with action in the ring and a lot on the floor.  We were treated to several amazing moonsaults by Teddy.  I don't how he and 2 Cold Scorpio manage to just float through the air like they do.  It's amazing! 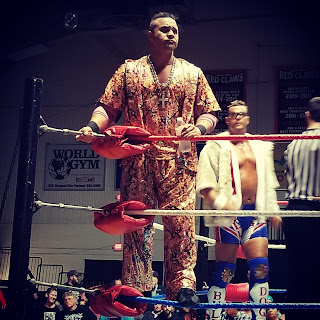 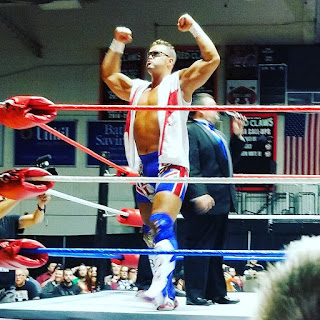 The Foundation managed to isolate Henry in the ring and Smith got the pin winning the match for his team.  After the match Hart cut one of his standard promo's with Smith chiming in that Limitless was a great audience.

Drake and Henry squabbled after the match with Drake being upset with Henry over the loss.  Henry slapped Drake before leaving the ringside area.

I was excited about this match.  It seemed fitting that they face off after Blackwood eliminated Dunn from the vacation cup last month.  This was good match with Blackwood getting the quick roll up pin on Dunn which popped the crowd.  Dunn was quite hated by the fans tonight.

Holy shit!  This one needed to be seen to believed.  They used trash cans, thumbtacks, a door, a barbed wire wrapped door, a lobster pot, and more.  It was brutal with action both inside and outside the ring.  Kirk has his tongue stapled to the top turnbuckle, nasty.  Also Lee handcuffed Danger Kid's earlobe to the bottom rope, Kid has big gauges that he removes before the match, nastier! Kirk was busted open early in the contest and then later when he took the lobster pot to the head it really tore him open bad. 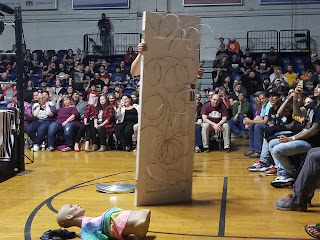 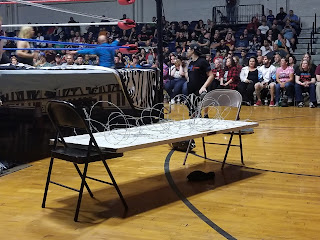 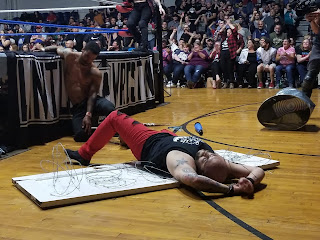 This essentially eliminated Kirk from the match leaving Lee to be double teamed by MSP.  They handcuffed Lee and powerbombed him on the barbed wire door.  They then crushed him on the lobster pot for the three count.  MSP may have won this match but I feel the war is far from over. 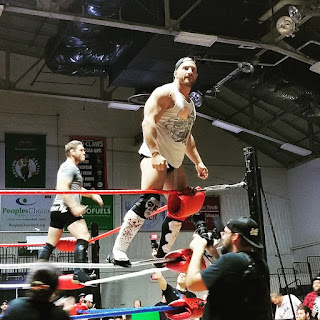 This was the first match back from intermission and sadly I think the crowd was still spent from the Street fight.  That or maybe these teams just didn't mesh tonight.  I felt like things were a bit off.  For me though the coolest moment in the match is when Lawlor gave The Butcher an airplane spin!  It was a good one too. 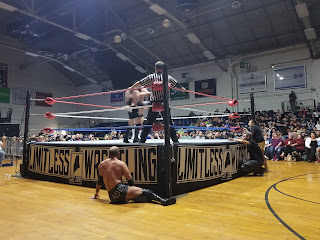 This was a great match!  As will all scrambles we got action both in and outside the ring.  Jody Threat even skateboarded in some offense.  She dished out a head scissors and a spear before eating a superkick.  Hurst picked up the win with a dominator type move on Threat. 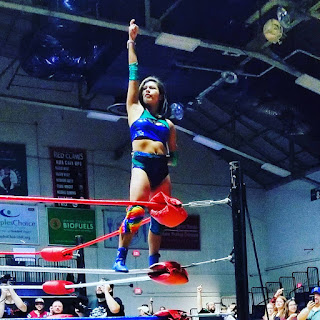 In this match it was Stat's career and Leary's hair on the line.  If you would have told me that Leary was going to lose this match and have his head shaved I would have lost that bet.  The match was great with Leary being a giant asshole the whole contest.  After Statlander pinned him with her finisher the crowd erupted!  They started cutting his hair in the ring and then at ringside Bradford finished the job.  It was an awesome moment. 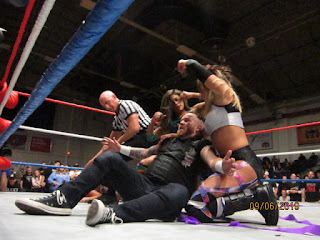 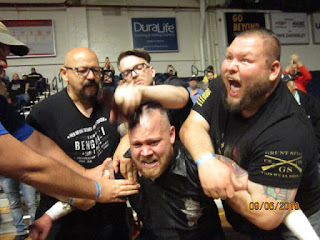 This was a very anticipated match and the perfect finish to the Limitless Wrestling four year anniversary event.  About two minutes into the match MJF hit Greene with a deliberate low blow for which the referee called for the bell. 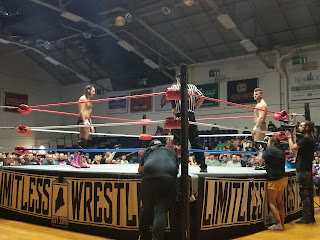 Randy Carver, Limitless owner, restarted the match making it no DQ.  The match quickly went to the floor and around ringside.  This match was not as crazy as the street fight but they didn't their fair share of damage to each other. 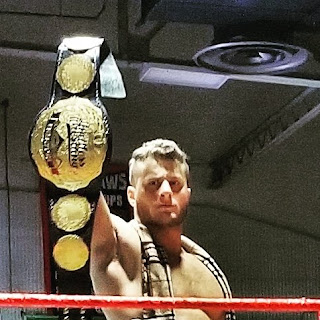 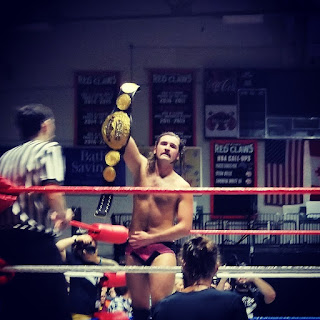 Finish came right in the center of the ring after a step up tomikaze by Greene on MJF.  Biggest pop of the night the referee hit the three count.  Every person in the building was on their feet!  We all wanted this bad for AG. 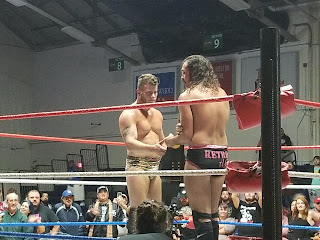 Post match MJF shook AG's hand and quickly raised his arm before exiting to the back.  I'm not sure who the next opponent for AG is going to be.  I'd like to see him square off with someone I haven't seen him wrestle in Limitless yet like Kevin Blackwood.

Limitless returns to the Portland Club on October 25th with Gangrel, tickets are on sale September 16th at the website.

Also Let's Wrestle returns on October 12th in Orono, tickets are also on sale right now for that show.  Front row is $12 and General Admission is $10.  I'll be there with my kids.


Thanks for reading, please leave a comment, read my other posts, and like my blogs Facebook page and while you're at it check out my podcast The Wrestling Insomniac on the Nerdy Legion Podcast Network.

Until Next Time!
Posted by Michael J. Labbe at 6:44 AM