This post we look at a few cards that I got signed both through the mail success and with help from my buddy Mikey getting cards signed at events he attended. 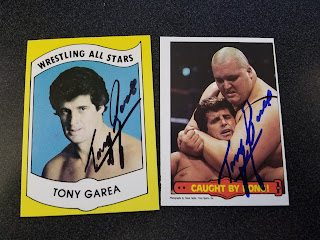 I got these cards through the mail direct from Mr. Garea.  I mailed them on April 29, 2019 and got them back August 19, 2019.  The card on the left is from the 1982 Wrestling All Stars Series B and the card on the right is from the 1985 WWF O-Pee-Chee Series II.  I love Mr. Garea's signature and both cards are in pristine shape. 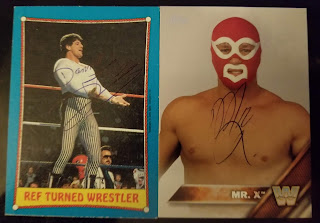 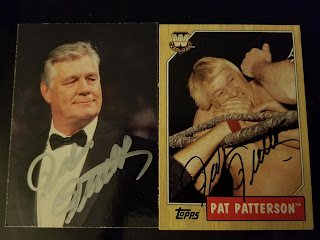 My buddy Mikey got these cards signed for me on May 18, 2019 in Hartford, Connecticut.  Mr. Patterson made an appearance at Wal-Mart promoting the Wal-Mart exclusive Mattel action figure which you had to buy go get an autograph.