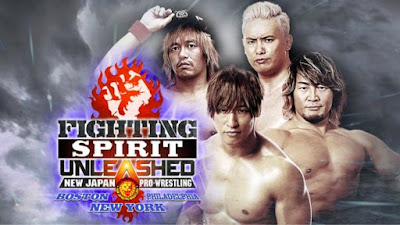 The reason this was late getting posted was because I typed it all out and essentially it got lost so I have to type it out again.

New Japan Pro Wrestling toured the Northeast for the first time making stops in Lowell, Mass, New York City and Philadelphia at the Lowell Memorial Auditorium, Hammerstein Ballroom, and 2300 Arena.  All very popular wrestling venues each with their own unique histories.  I have been to the Memorial Auditorium three times in the past for ROH shows, two PPV's and a War of the Worlds house show.

The Memorial Auditorium is a beautiful venue with amazing acoustics.  The fans were hot and very loud all night long.  I would have to say that this is the best show that I went to all year from top to bottom and definitely one of the best shows I have ever been too.

Mikey and I recorded an episode of the Wrestling Insomniac podcast on the way to and from the event. Check it out here.  We met Jay and his friend Crip at the venue.  They did the official meet and greet from 4pm to 5pm with only Sanada, Tanahashi, Rock n' Roll Express, and Roppongi 3K with Rocky Romero.  It was odd because they wouldn't sign your item, you got a picture with a nice backdrop taken with your camera and they gave you a presigned 8x10.  Mikey, Jay, & I met Sanada, but I don't care about 8x10's. 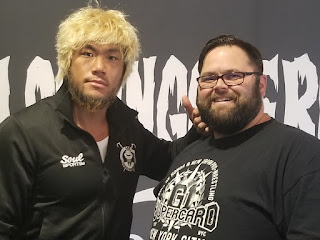 After the meet and greet we had an hour until doors opened so we went across the street to Rizzo's and got a couple slices.  We sat with some other fans and we met Joe Briggs and his wife Rebecca.  They are from Virginia and wrestle in that area.  They are friends with The Rock n Rolls and love good wrestling, just like us.  They went to the Lowell and Philly shows, it would have been fun to go to all three shows.

The cards were different for each night with different titles on the line and a mix of singles and tag team matches.  For my money though I think we got the best announced line up.  Doors opened up promptly at 6pm and we got in quickly.  I was surprised that wrestlers were out signing autographs and taking photos because we already had the official meet and greets.  Around the lobby area was Lance Archer, Mikey Nicholls, Hirooki Goto, Ishii, and Sanada.  I grabbed a photo with Goto and really wished I would have brought his card with me. 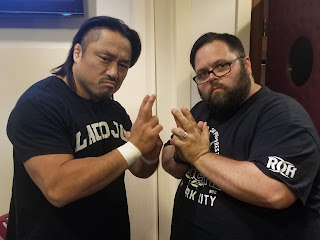 Mikey, Jay, and I all bought the official Boston tour stop shirt, we all agreed it was bad ass. 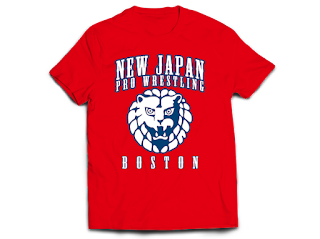 The first match started right at 7pm and the show flowed so well and didn't drag at all, very efficient.  No intermission but I'm glad there wasn't.  The show was over by 10pm and was a solid three hours, well worth the money and the trip down. 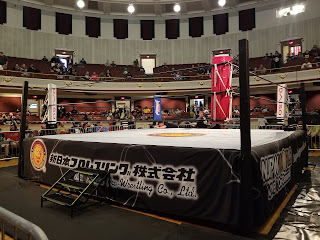 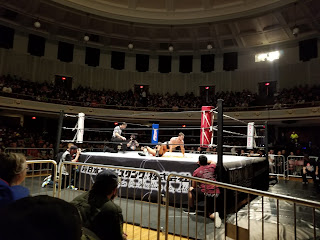 I loved that show opened with a Young Lions match and I would have been satisfied if it had gone to a time limit draw.  It was a hard hitting back and forth match and it was everything that a Young Lions match is with a focus on the basics.  In the end Karl Fredericks go the submission with a half Boston Crab. 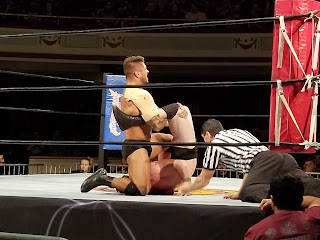 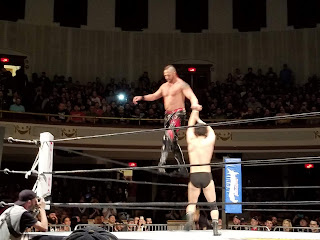 Lance Archer came out his usual house fire and destroyed the only young boy at ring side twice.  Archer dominated the match with Narita showing good heart and fire on his comeback.  It wouldn't have surprised me to see Nartia get a quick pin.  He just went on excursion from New Japan to the LA Dojo.  However in the end Archer got the win with the Everybody Dies Claw.

Solid tag team match up, Juice was over big time with the crowd.  Both teams really meshed well together, especially Nicholls and Robinson but they have teamed together in the past.  I haven't been a fan of TJP but he looked great here.  Connors did as well, but he succumbed to the Mikey Bomb. 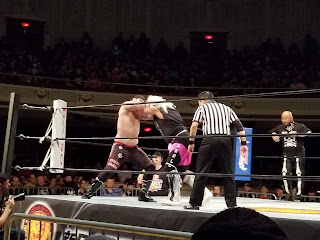 I've met the Rock n' Roll Express in the past but I've never seen them wrestle live.  I've missed opportunities in the past and I didn't think that it was going to happen.  When Mikey messaged me that they had been announced for this tour I couldn't believe that this show was how I was going to finally see them wrestle.  I was also very excited that we got them in their only two person tag team match of the tour and they there were wrestling Chase Owens, who was trained by Morton. 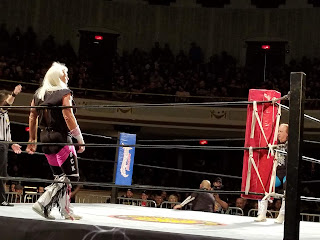 The moment their music hit the crowd didn't stop cheering for the Rock n' Roll Express, many times the crowd chanted "Rock n Rolls" at the tops of their lungs, like it was the mid 80's Jim Crockett Promotions / Mid-Atlantic Championship Wrestling.

Morton and Gibson were both on top of their games, especially Morton who his a frankensteiner and a suicide dive through the ropes.  It was friggin' Amazing!  Sadly, the Rock n' Rolls lost the watch when Owens pinned Morton after a package piledriver.  It far exceeded everything I had expected.  Mikey has seen them at Beyond Wrestling's Americanrana this past July and he said this was much better and they let it all hang out. 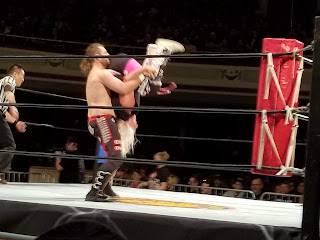 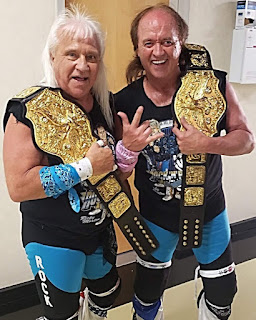 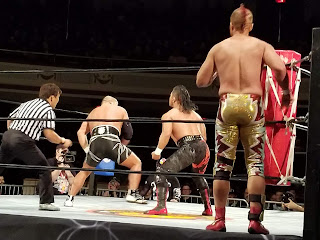 Another great match on a card that just didn't disappoint.  Ishii and Shingo multiple times exchanged stiff shots in the center of the ring, it was fantastic!  The action was in and out of the ring.  This match is the best I've ever seen Red live.  That match with Osprey really did  reinvigorate him.  He and Ishii gelled well as a team.  I wouldn't be surprised to see Red in Japan for New Japan soon.  Ishii pinned Bushi with the vertical drop brainbuster. 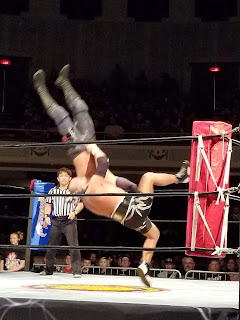 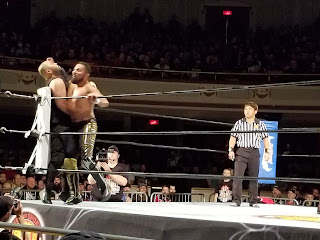 Super excited to see Goto live and I love his entrance music.  I was very surprised that HASHI picked up the win for his team submitting Gedo.  This was a fun match, Jay White has some serious heat and KENTA got a mixed reaction, mostly jeers, but he got a pop when he teased the go to sleep. 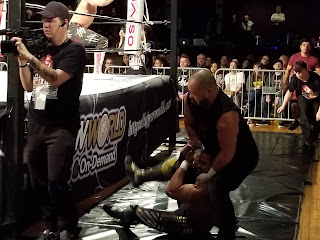 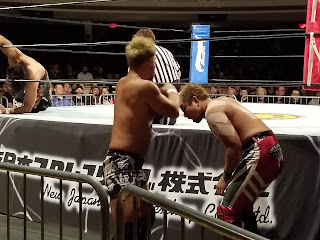 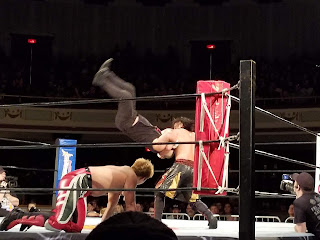 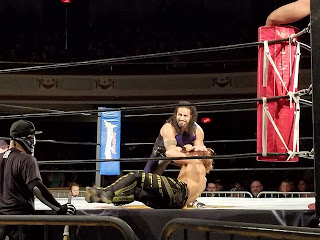 Going into this match I knew GOD was going to retain, they aren't going to do a title change here in Lowell.  Mid way through the match I was convinced that R3K was going to win the titles.  At the end Yoh had a series of near falls against Tama Tonga and with each false finish I was out of my feet thinking I was seeing a three count.  Especially when Yoh reversed the Gun Stun into a backslide...damn!  This was TAG TEAM WRESTLING!  Tonga pinned Yoh with the Gun Stun. 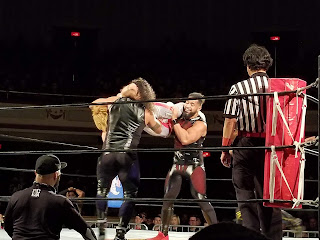 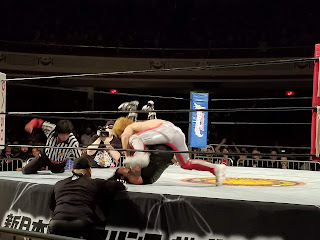 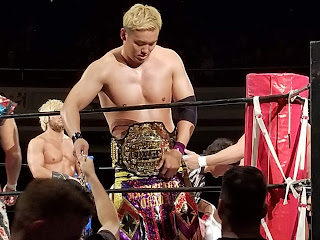 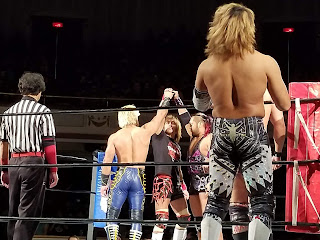 Everyone got a big pop when they came out with Naito, Tanahashi, & Okada topping the night.  This was a tremendous match and a great way to send the crowd home happy.  Everyone shined, everyone looked good, feuds were continued and I was surprised when Tanahashi pinned Naito with the ground cobra twist. 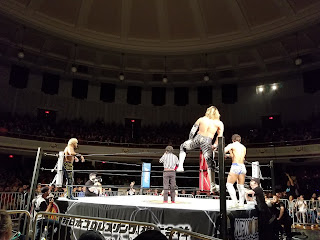 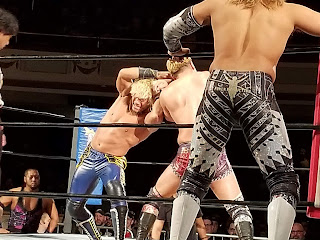 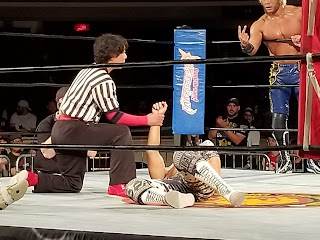 Top to bottom this is the best show as a whole that I have been to not only this year, but in years.  There wasn't a weak match on the card.  The crowd was hot all night long and I blew my voice out.  Tonight was also a very emotional experience of me.  Seeing the Rock n Rolls wrestle, seeing Tanahashi wrestle for the third time this year knowing that he could be done soon.  This is his 20th year in wrestling and it's apparent that he's in rough shape. 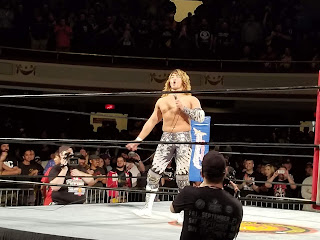 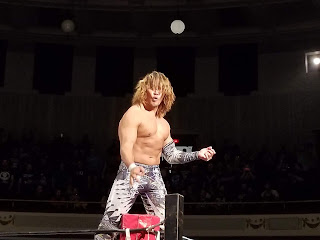 Post match Tanahashi stayed in the ring alone, he thanked us all for coming, he said that they would be back and when they did he would have the championship.  He also played his patented air guitar for us before leaving.  It was a great capper to the night. 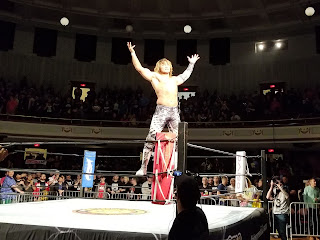 The show had to of sold out by bell time, and with how hot the crowd was I can only imagine that they will be back, hopefully next spring.