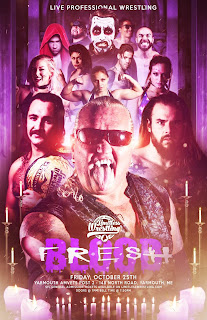 Friday October 25th Limitless Wrestling  returned to action, this time in a new venue, at the AMvets Hall Post 2 in Yarmouth, Maine.  Canaan rode down with me and we met Mikey, Josh, & Roy there.  Carolynn attended her second ever Limitless show, the first being last month's Expo event.  Also saw the usually cast of regulars, Phil, Jess, Megan, Alex, and many others.

I like the venue a lot, easy to find, right of 295, big parking lot.  The place was packed, leaving little room for the gimmick tables but we all make due the best we can.  I would wager it was basically a sell out. 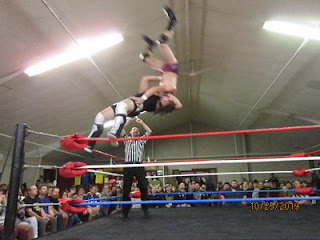 These guys have has some great matches in Let's Wrestle, and if you are going to showcase the promotion you couldn't pick two better guys to represent the brand.  They brought everything that they had tonight and absolutely killed it!  Honestly this match set a very high standard for the rest of the card to have to follow.  Cruz pinned Price after a wicked missile dropkick. 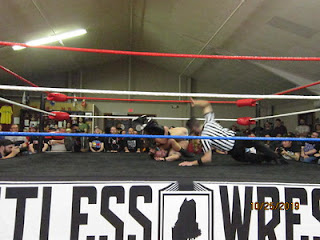 Hard hitting match that was fast paced at times.  Several times it appeared that Silver had completely wrecked Hirsch but she just kept coming.  At one point Silver hit her with an impressive helicopter style blue thunder bomb.  It wasn't enough though as in the end Leyla walked out with her hand raised in victor. 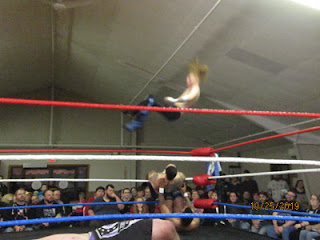 Excellent tag team match! My first time seeing Violence is Forever live, they work very well together and utilize quick tags and high impact offense.  At one point this match broke down into a slap fight, the most violent slap fight I have ever seen.  MSP continued their winning ways pinning Ku after their finish.  I'm excited to see who is next for MSP. 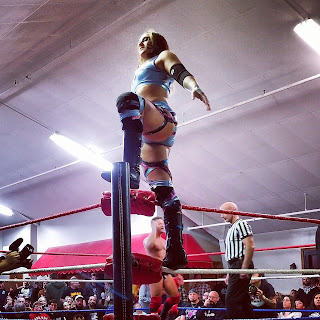 This was a great match, no surprise with the competitors.  We've seen Konley here in Maine before with Big Time Wrestling and Pro Wrestling Experience, including this past August in Fairfield.  However this was his first time with Limitless and I'm guessing that he'll be back.

Awesome combination tonight as Konley reversed an avalanche hurricanrana rolling through and coming with with a powerbomb, bucklebomb, and variation of a sit-out powerbomb for a two count on Stat.  Stat picked up the win with her finisher.

Kris Stat just keeps getting better and better every time I see her.  I've heard that she signed with WWE but doesn't start until January which is great for her but bad for us.  I had gotten my picture taken with her the night she debuted in Limitless and I got another one tonight. 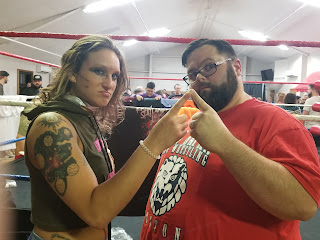 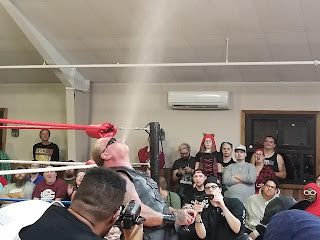 This was a fun match!  Lee had a lot of heat with the crowd, rightfully so, and Eastman is just a natural at getting people to hate him.  It was super cool hearing Gangrel's music and seeing his entrance, he had his goblet of blood and spit it before the match.

At the bell DL Hurst hit a quick package piledriver on Lee causing him to roll to the floor.  Danhausen then stood on the ring apron as "Tequila" began to play and he did the Pee Wee Herman dance kicking Lee in the face a couple times.  Trying to get away Lee ran into Hurst who also did the dance and kicked Lee in the face.  Rolling back in the ring he had a double kick will the fans yelled Tequila, it was a pretty amazing moment that got even better when Gangrel started doing the Pee Wee Herman dance.

The action picked up with Gangrel hitting is patented double arm suplex on Hurst.  A bit later Hurst had the upperhand on Lee but after being distracted by Eastman, Lee chop blocked Hurst and rolled him up for a three count holding the tights.

Danhausen was the next to be eliminated also by Lee after being hit with a low blow and what I'm going to call a reverse pedigree.  Not before Danhausen poured his jar of teeth down Lee's throat.

Eastman attempted to help Lee but got blood spit in his face from Gangrel who then pinned Lee after a wicked implant DDT.  For a guy that is 50 years old Gangrel looked awesome.

WOW!  I'm not even going to try just go find this match and watch the hell out of it!  They beat the piss out of each other in and out of the ring first with just their first and then brought in tables and doors.  When the match was over the ring was a mess of broken door debris. 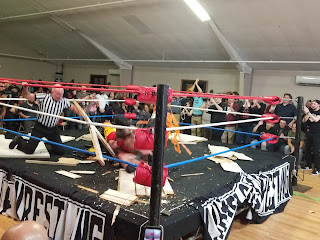 I'm a HUGE fan of Mathew Justice now and I want him at every Limitless show going forward.  The matches he could have with Ace Romero, Briggs, Greene, and basically everyone.

This was the first match back after intermission and it got the crowd back up.  Got to see Slamovich with a sweet wheelbarrow suplex on Vox and Saito suplex on Kat.  Threat was irish whipped by Kat on her skateboard into Slamovich spearing her into the chairs.  Vox got the win when she submitted Slamovich. 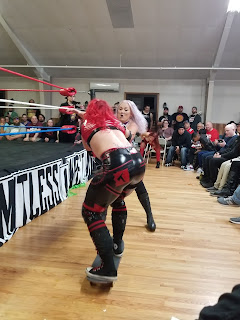 Post match Kris Stat came out to celebrate with Vox, who got up on Stat's shoulders.  Stat then cut a promo stating that they were a team and proposed they take on MSP.  Then she said they should challenge the winner of Greene vs. Briggs in a triple threat match.  But ultimately she decided "How about I finish what I started and fucking murder you" dropping Vox on her face.

And now for something completely different.  This match was an excellent mat based encounter with striking, reversals, and submissions.  I friggin loved it!  So glad to see Yehi back and I hope he doesn't take so long to comeback next time.

This was a wild and fast paced match.  One sick spot the Butcher had Casanova in a Texas cloverleaf, he picked him up and slammed him back down into a powerbomb and right back into a cloverleaf, it was friggin brilliant! 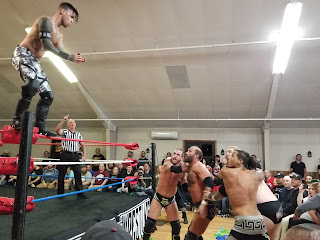 Blackwood had Casanova up in a fireman's carry and wiggled out, Dunn then appeared to accidentally hit Blackwood with death by elbow getting the pin.

Solid main event Glad to see Briggs back, it's been a long time since he was last in Limitless since his hip injury.  These two guys brought it for a solid match that saw Greene retain with his super tomikazi. 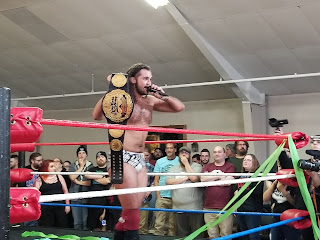 Post match Greene cut a promo challenging Teddy Hart, which everyone seemed to really like the idea of Greene vs. Hart one on one.  But then he said to bring Davey Boy with him and he would get Ace to be his partner.  Still an awesome match, but I hope we get Greene vs. Hart down the line.

It was another great show from top to bottom for Limitless.  Through-out the night they announced their return to this venue on Black Friday November 29th for what will presumably be their last show of the year.

Until next time!
Posted by Michael J. Labbe at 8:37 AM