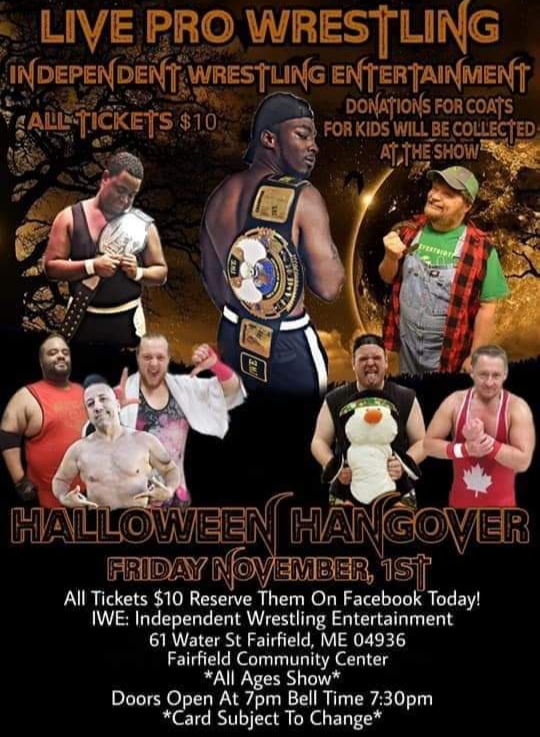 Tonight my friends and I had tickets to see Evil Dead: The Musical in Orono, Maine but due to a Halloween Night storm the venue was without power and cancelled the show.  So instead I headed to the Fairfield Community Center for a night of IWE Wrestling action!

Roughly 75 fans were in attendance, which is really good considering Fairfield is a big football town and there a home playoff game tonight as well.  IWE would have had no way of knowing this when they booked the show.  I remember a half dozen years ago I was one of 6 in the building on the same night as homecoming.

Unfortunately card subject to change was in full effect with a handful of advertised talent was unable to attend.  None the less we were treated to a card of five matches.

The show opened with General Manager Adam Ricker cutting a promo about tonight's main event and talking about his tag team title defense tomorrow against CPA.  He and his partner Jimmy Limits was going to take the night off to rest for tomorrow but JP O'Reilly & Ricky Williams were going to be in action tonight, and O'Reilly's match was now.

Roadblock and Lucifer had to tag in and out during the match.  Coach Beavis wanted Williams to leave ringside because he didn't have a managers license, which is old school and always makes me laugh.
O'Reilly held his own during the match beating the crap out of Roadblock along the way with an especially brutal kick in the jaw. 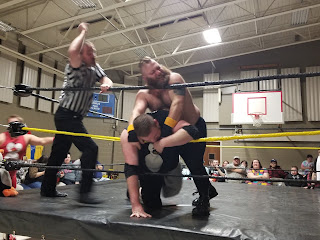 The finish was interesting as Lucifer was choking O'Reilly he refused to stop after the referee's 5 count and even pushed the referee who called for the bell for an obvious disqualification....wrong he declared it a no contest. 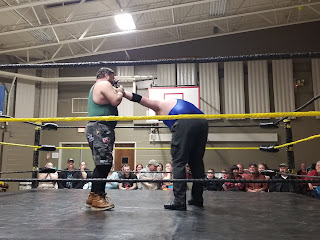 I've known Larry for 20 years and I've always been entertained by his style of wrestling, which has evolved over the years, and tonight was no different.  Larry dominated the majority of the match winning after a Polish Hammer and getting the pin with the whoopee cushion.  Only downside to the match is we got no chops. 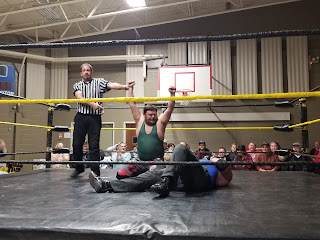 Ricky Williams with JP O'Reilly vs. The Horror

The Horror came out in a bugs bunny costume, good back and forth match.  They worked an excellent bear hug spot.  They teased thumbtacks, but instead it was gummy bears in the bag, Horror chokeslammed Williams on the gummy's for the three count. 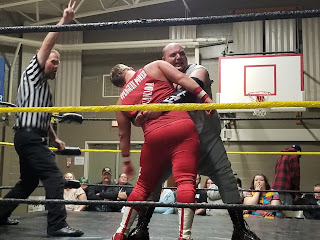 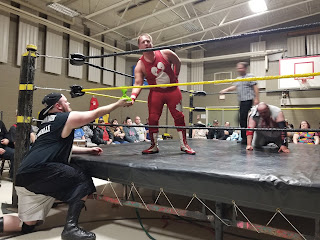 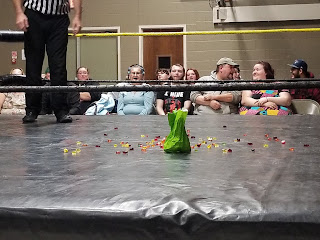 This is my first time seeing Primer wrestle in years.  At one point Rumble was on the floor and the referee was laying in the count and Rumble said "I have until the count of 10" which is one thousand percent accurate.  I know it might seem ridiculous to others, but it's now pinning someone for three seconds, of breaking a hold after 5 seconds, or 10 seconds for a count out.  It's a three count, five count, and 10 count.  However long it takes the referee to administer that count is how long the competitor has to comply.  Even then, it's at the referee's discretion. 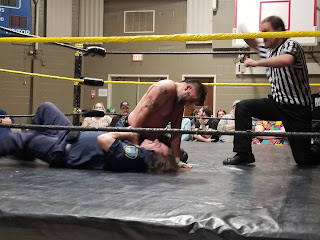 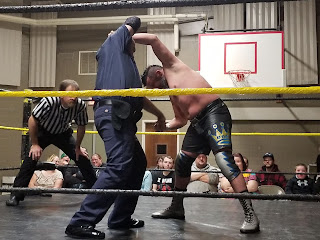 Rumble his sweet butterfly suplex late into the match, but it wasn't enough.  Ricker tried to interfere and John Bryar came to ringside to aid Primer.  Rumble went to the floor to confront Bryar which distracted the referee.  Ricker attempted to attack Primer but ate a cutter, Rumble then ate a cutter with Primer getting the three count. 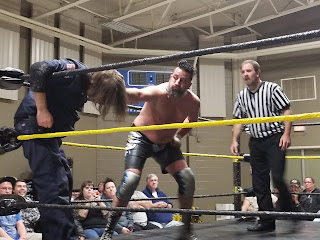 The Guatemalan Prince vs. Allen Prophet

This match plodded a bit, but overall was decent.  They bottom rope broke early in the match and they didn't seem hampered by it at all.  Prophet is very athletic and has some good high flying skills including a picture perfect frog splash!  He just needs work on stringing his high spots together and not just set up, execute, set up, execute. 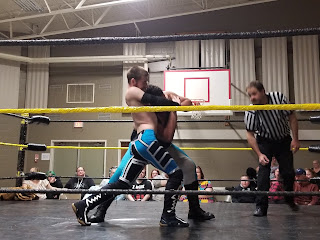 The finish came when Prince had the referee back into the corner questioning a two count when Prophet came up behind him, Prince mule kicked him in the groin and then hit the rope assisted piledriver for the pin.  Post match Prince continued the attack on Prophet before heading to the back. 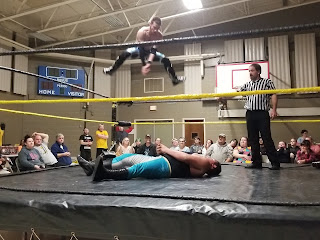 Prince, to me, shows a ton of potential if he keeps at it and gets under someones learning tree like Rumble.  He has moments where he's on point and others where he is struggling.  From what I've seen tonight and in the past he wants to be a wild brawler type like Bruiser Brody or Stan Hansen.  He should just embrace it for a spell and see what happens.

With intermission the show was over at 9:20pm so it was under two hours.  They didn't announce a return date that I could hear, but I'm guessing the beginning of December.  If you follow in the IWE or IWE Fan Nation Facebook pages they will announce it there.

Until next time!
Posted by Michael J. Labbe at 1:16 AM