In this post we take a look at the most recent through the mail success I've had. 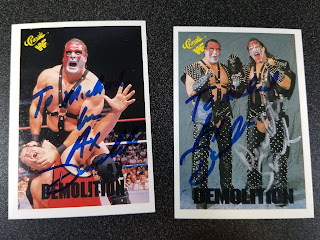 Both of these cards are part of the 1989 WWF Classic card set released by Game Time Inc.  The card on the left is a solo card of Bill Eadie as Ax.  The card on the right I was hesitant to mail out as it was already signed by Barry Darsow as Demolition Smash.  I was very excited to get these back and to finally have the card signed by both members of Demolition. 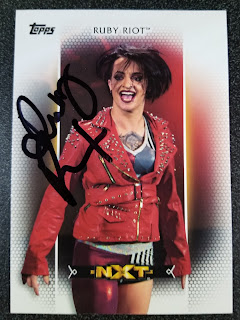 This card is part of the 2017 Topps WWE NXT sub-card set. I mailed this card to the WWE Performance Center and I got it back in the mail the day before she debuted on SmackDown Live so it looks like I mailed it off just in time. This card was released in 1998 by Baseball Magazine in Japan at the time Ishikawa was wrestling for his own promotion Battle Arts.  He is currently an instructor and coach at Santino Marella's Battle Arts Academy in Ontario, Canada.