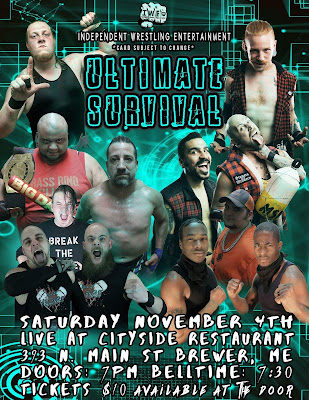 Here is my review of IWE's Ultimate Survival in Brewer, Maine on November 4, 2017

Match 1: Kalvin Michael Strange defeated Elite Terrell to advance to the finals of the Live Wire Championship Tournament
There were a few awkward spots but overall a solid match and good win for Strange. I didn't expect Terrell to be doing double duty.
5.75/10

In Ring: Kennedi Copeland comes out and says that there aren't any females for her to wrestle tonight so she puts out an open challenge to any of the men in the back.

Match 2: Kennedi Copeland defeated The Dozer
This was a squash and good thing.
3/10

In Ring: The Captain brings out Alexander Lee and Adam Ricker for the Ultimate Survival man advantage coin toss. Like always the heel team wins the coin toss. This was a very uneventful segment.

Match 3: Todd Harris defeated Foxx Vinyer to advance to the finals of the Live Wire Championship Tournament
Good match that I really enjoyed. Great win for Harris considering the size difference and that Vinyer has made appearances with Ring of Honor. If this gets uploaded to YouTube check it out, its good.
7.5/10

In Ring: Todd Harris cuts a promo basically saying how great he is and that he is gonna win the Live Wire Championship next month. Kalvin Michael Strange comes out and stares down Harris while Harris makes fun of him. Then Strange tries to lock on a fujiwara armbar but Harris gets away.

The this was a great match that went about 40 minutes. I love crazy brawls like this. The only drawback was that at times there was to much going on and I couldn't watch all of it. This match was a tale of two matches. The first half of the match they were basically wrestling until Jimmy Limits turns on The Station, brogue kicking them all which caused Adam Ricker to be eliminated.

Adam Ricker is pissed and attacked Moxie a baseball bat getting him eliminated. Then Danger Kid freaked out at the referee and there should have been a DQ but then the referee said there were no DQs and all hell then broke loose.

The fight went all over the place. They pretty much only used chairs but they made great use of them. Rob Marsh even teased tacks but for some reason they weren't used. At the end it came down to Danger Kid vs. JP O'Reilly and Bill Vaux. Kid got a quick school boy on Vaux and then quickly made O'Reilly tap out to become the sole survivor.
9/10

This show scored a 25.25 out of 40 for an overall score of 63.13%. This was a great show and a great night of action. The bad was kept to a minimum and the good vastly outweighed it. Hopefully this show comes out on DVD because it would be worth buying not only for Ultimate Survival but for Harris vs. Vinyer.

I'm really hoping that Todd Harris wins the Live Wire Championship. He is the most entertaining act that IWE has going right now and has improved tremendously as a wrestler since he first appeared in IWE.