These cards were all signed in person on November 3, 2017 at Limitless Wrestling "Hybrid Moments" at the Portland Club in Portland, Maine.  You can read my recap of the show here. 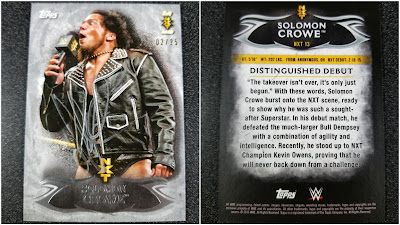 I actually had two of the cards and gave one the Sami Callihan, the former Solomon Crowe.  Previously I had two cards signed by him at a Limitless Wrestling show in July. 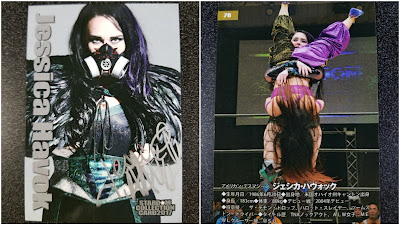 This card is from the 2017 Stardom Collection card set released in Japan by World Wonder Ring Stardom promotion.  I almost got my hands on another card of hers from this set but was outbid on ebay.

When I showed her the card she was surprised and asked "Where did you get this?" I told them Stardom produced it and she seemed a bit pissed.  Evidently she didn't know it even existed, she did admit the photo on the card was from a photo shoot she did with them, she had 8 x 10 versions, but still it would have been nice to know. 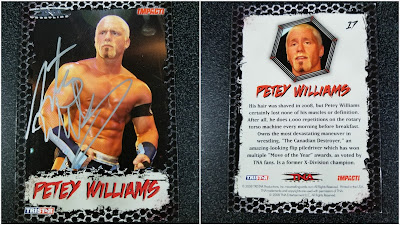 This card is from the 2008 Tristar TNA Impact wrestling set.  Williams retired from wrestling in July 2014 and just returned in July of this year.  I had actually been trying to find contact information to mail him some cards and hadn't had any luck.  I was surprised that Williams wrestled on this show considering he was booked to compete at the Bound for Glory PPV two days later in an Ultimate X Match. 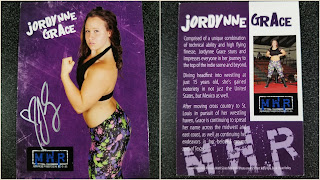 This card is part of the independent Missouri Wrestling Revival series two card set.  Brian Kelley has produced some great cards over the years with cooperation of the wrestlers featured.  For a lot of wrestlers this is their first and sometimes only trading cards.  He has complete sets of both series and some single cards.  You can find them here on his website.  Cards are only $2 each and are high quality and well worth it.

Jordynne wanted to makes sure that I knew it was an old picture and an old card.

Later Readers!
Posted by Michael J. Labbe at 2:18 AM