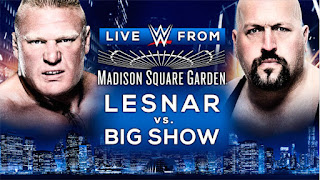 No opening pyro the set up and entrance is that of a normal house show
Commentators JBL, Byron Saxton, and Rich Brennan.  Eden Stiles handled ring announcer duties.

Dolph Ziggler & Randy Orton vs. Sheamus & Rusev w/ Summer Rae
Decent opening match with Dolph taking the Ricky Morton heat before getting the hot tag to Orton.  RKO out of nowhere later and Orton gets the pin on Sheamus.   Crowd was hugely hot for Orton.
After the match Rusev called Sheamus a stupid American and called him useless, Sheamus brogue kicked him.  7/10

Video package from Raw of Rollins attacking Corporate Kane with a chair leading to Demon Kane coming out to attack him.

Backstage, Renee Young interviews with Corporate Kane on crutches.  He talked about helping Seth Rollins being worried about the Demon that keeps attacking him and how he would help stop it.

Stardust vs. Neville
Pretty standard back and forth match with Neville hitting red arrow for the win. 5/10

Backstage, Renee Young interviews Paul Heyman who cuts yet another awesome promo as only he can do.

Video package for the upcoming NXT behind the scenes special coming soon to WWE Network that honestly looks amazingly good!  Debuts after Raw this Monday, 10/05/2015

Team Bella: Nikki, Brie, & Alicia Fox vs. Team PCB: Paige, Becky Lynch, & Divas Champion: Charlotte
Should be noted Bella’s were announced and came out as a team where as Team PCB had individual introductions playing off the tension in the team.  Side note, I really just can’t stand Nikki Bella at all anymore and would not be upset if something horrible, yet non-life threatening befell her.  Let’s get this straight, it’s not that she’s such a great heal and that’s why I don’t like her…I just don’t like her personally.  Like I don’t like Rey Mysterio.
Basically Paige is a bitch to Becky and Charlotte through-out the match then they dessert her and Paige is pinned after a rack attack from Nikki.  Good match though, nothing breath taking 6/10

Paige cuts a post-match promo essentially continuing her slow burn heal turn saying she doesn’t deserve to be treated like this and that she doesn’t know what she to them to make them do this.

Video package showing footage from Raw & Smackdown of the Wyatt and Reigns fued.  I don’t care at all about them being in a Hell in a Cell match.
Intercontinental Champion: Kevin Owens vs. Chris Jericho
Pre-Match promo Jericho announces that October 3, 1990 was his debut match making tonight his 25th Anniversary in wrestling.  He points out Lance Storm in the front row his first ever opponent.  Then talks about his father playing hockey at MSG.  Jericho then points out Don Callis & Lenny St. Clair aka Dr. Luther also in the front row.  Not mentioned, but sitting next to them was Arnold Skaaland’s wife Betty.   She must be in her 80’s and I think it’s amazing that she wants to be there watching wrestling after all these years.

Owens comes out to a big ovation.    Outstanding match once again from Kevin Owens, this time with Jericho has his dance partner.  I would love to see these two guys again.  We get our first “This is Awesome” chant, deservedly so.  Non-stop action from bell to bell you wouldn’t believe it was their first ever match together.  They hit everything except the pop-up powerbomb, Owen’s took the win reversing a second walls of Jericho attempt into a small package.  8.5/10
Owens wished Jericho a Happy Anniversary as he was walking to the back.  He also stopped to taunt a crying child. Owens post-match antics 10/10

Promo for the new WWE Network Show “Breaking Ground” which is about the WWE Performance Center, looks greats.  Debuts 10/26/15.

Video Package of the Dudley Boys vs. New Day

Pre-Match Promo during New Day’s entrance continued the hilarity they bring every week.  They played down the Dudley Boys calling this the end of their Goodbye Tour then continued their “Save the Tables Campaign.”  Dudley’s got a good ovation.

Crowd was hot for this match still hyped from the Owens vs. Jericho match.  Lots of “We want tables” and “New Day Sucks” chants.   New Day dominated both Devon & Bubba Ray early with quick tags and wear down holds.  Dudley’s hit a 3D out of nowhere and Woods hit the ring causing the disqualification.  New Day then beat down the Dudley’s then brought a table into the ring.  Xavier Woods played taps on this Trombone, back to too the action in the ring.  Dudley’s cleared Kofi & Big E then put Woods through the table standing tall.  Dudley’s win, New Day still champs.  7/10

Unnecessary video package shown hyping the Brock Lesnar/ Big Show feud with some history re-written as they show clips of the 2002 Survivor Series match where Show beats Lesnar for the WWE Championship with no mention at all of Paul Heyman turning on Lesnar at they show, they even showed a clip of Heyman out of context being shocked and Lesnar being pinned.

Brock Lesnar w/ Paul Heyman vs. The Big Show
Tremendous ovation at the opening note of Lesnar’s entrance music
Straight from the opening bell Show no sold a couple Lesnar clotheslines then he reversed an attempted double leg dumping Brock over the top rope.  Apparently Show is playing the unstoppable monster for this match.  Lots of Suplex City chants.  Whoah!! Three quick chokeslams from Show followed by a loooooong two count.  Show goes for the knock-out punch Lesnar ducks, 4 german suplex and an F-5 later Lesnar has his arm raised.  Pretty high impact 4 minutes of wrestling.  8/10

Post-Match Lesnar heads to the back, then decides to return to the ring where a the very stoppable monster is tossed around again with an overhead belly to belly suplex and another F-5.  Crowd sings nah-nah-nah-nah goodbye to Show as he leaves the ring.

Hype video for Cena vs. Rollins for the United States Championship Steel Cage Match including footage of John Stewart costing Cena the title at Summerslam

Steel Cage Match: United States Champion: John Cena vs. World Champion: Seth Rollins
The World Heavyweight Championship is not on the line.
Cena came out second, was greeted with “John Cena sucks” chanted to the beat of his entrance music.   We get that big match feel with the introductions taking place once both were in the ring.

Rollins using the cage early throwing Cena face first into the cage, I’m a fan of cage matches but I like some blood in my cage matches.  I’m 10 minutes into this match and really I’m not that impressed.  Crowd is into it but their previous matches at Summerslam and Night of Champions were much better.   They basically took every generic cage match spot and did them.

Rollins gets the upper hand and Cena is down in the cage he looks like he’s about to escape over the top when Demon Kane comes down stopping him.  Rollins then decides lets goes for a frog splash off the top of the cage, eats canvas, then an AA and Cena retains.  6/10

Post-match Demon Kane enters the cage hitting Rollins with a chokeslam then a tombstone piledriver.  Demon Kane hold the WWE Championship high before dropping it on Rollins and leaving the ring to end the show.

Overall it was a really good show it definitely had a different feel to it as the presentation was more than a House Show, but definitely not a PPV or Television event.  Matches had a house show feel to them as the focus was definitely on the wrestling more than anything else.  You know what it was, it was like a Coliseum Home Video exclusive type event.  That’s exactly what it was!

I would like to see WWE do more specials like this for the MSG house shows or other big house shows it would make WWE Network even more appealing.

Interesting note, no pyro of any kind was used, not for the opening, Dudleys, Lesnar, Kane, no one.