I was searching around HULU to see what they had one night and stumbled across this show.  I had never seen it before but I had seen the advertisement for it in several Pro Wrestling Illustrated magazines when I was kid.  The quality of the program is excellent, and it was apparently distributed by Artisan pictures.  They must have acquired the rights at some point.

World Class Championship Wrestling
David Von Erich Parade of Champions
May 6, 1984 Texas Stadium Irving, Texas
Commentator: Bill Mercer
Junk Yard Dog vs. The Missing Link with General Skandor Akbor
A clipped version of the match with only a couple minutes of the original match show.  Link originally got the pin by cheating but the decision was overturned and Link was disqualified.

Solie and Apter talk about Gorgeous George and footage is shown of his ring entrance.  This led to the footage of “Exotic” Adrian Street and Miss Linda being shown including a promo with Bob Caudle.  Next they talked about wrestlers that came from the gridiron showing brief footage of a tag team match involving Wahoo McDaniel with possible Mark Youngblood vs. Dick Slater and Bob Orton Jr.

Jim Crockett Promotions / National Wrestling Alliance
Starrcade ’83: A Flair For The Gold
November 24, 1983 Greensboro Coliseum
Commentators: Gordon Solie & Bob Caudle
Carlos Colon vs. Abduallah the Butcher
Clips only as Abdullah is bloodied and then there is a ref bump, Colon locks in the figure four leg lock and Hugo Savinovich hits Colon with a foreign object allowing the Butcher to get the pin and the win.

Gordon and Bill talk about Andy Kaufman and his time in wrestling.  They show footage Kaufman in action against Lawler and a post-match locker room promo with Lance Russell.

May 24, 1973 Kansas City, Missouri
2 out of 3 Falls Match
NWA World Champion: Dory Funk Jr vs. Harley Race
Joined in progress in the 3rd fall of the match; clips of the match are shown ending with Harley pinning Funk after a standing suplex winning the championship.

Gordon and Apter talk about the different type of champions in wrestling leading to them talking about the people’s champion the “American Dream” Dusty Rhodes.

“American Dream” Dusty Rhodes vs. Tully Blanchard
Just a couple minutes of this match is shown.  I cannot tell what event his is from but it is definitely Jim Crockett Promotions and there are no commentators for the match.

Gordon talked about the death of David Von Erich and his sudden death in Japan on February 10, 1984.   A clip from the 1st David Von Erich Parade of Champions was played of Jill Floyd singing “Heaven Needed A Champion.”  Bill Apter then introduced the PWI Match of the Year winner

World Class Championship Wrestling
David Von Erich Parade of Champions
May 6, 1984 Texas Stadium Irving, Texas
Commentator: Bill Mercer
NWA World Champion: “Nature Boy” Ric Flair vs. Kerry Von Erich
Just the last couple minutes of the match was shown with Kerry pinning Flair with a backslide to win the NWA World Heavyweight Championship.  Kerry would only hold the title for 18 days before losing it back to Flair in Yokosuka, Japan.

Continental Wrestling Association
Mid-South Coliseum Memphis, Tennessee
January 9, 1984
Commentator: Lance Russell
The Fabulous Ones: Steve Keirn & Stan Lane vs. The Moondogs: Rex & Spot w/ Jimmy Hart
We are joined in progress of a pier six brawl with clips of various moments of the match with no ending shown.

To close out the show there is a montage of action with George Thorogood and the Destroyers version of "Willie and the Hand Jive" playing. In fact here it is:

The graphic at the top is the one you will find on Hulu.  The picture below is what I remember seeing in PWI, minus the DVD logo at the bottom center spine. 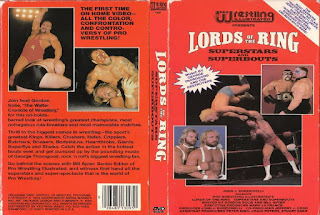