Finally, for the first time in over 9 months I was able to return to the Fairfield Community Center for a night of Professional Wrestling!  The last time I was there was in December 2014 for MEW.  I actually found myself getting very excited when I hit the exit ramp knowing what was to come.

I met up with Roy at the Fairfield House of Pizza for some pie and great wrestling conversation.

We were met at the show by Mikey and Phil was there.  The show started 15 minutes late, which is not surprising.  What was surprising was that the rest of the show was well timed out with a reasonable intermission. 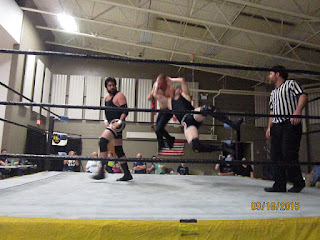 The Mutts defeated John “The Bomb” Bryar and Aiden Andrews after Andrews was pinned.  Sonny wasn’t there so Bomb started the match on his own before Aiden ran in to become Bomb’s partner.  He proved to be useless as he was quickly pinned. 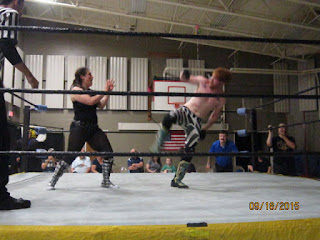 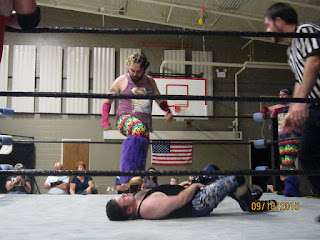 Primer Inc defeated Big Moxie & JP O’Reilly with Roadblock with a reverse DDT/double foot stomp on O’Reilly.  Big Moxie was better than I thought he would be.  With time and continued training he could be pretty good. 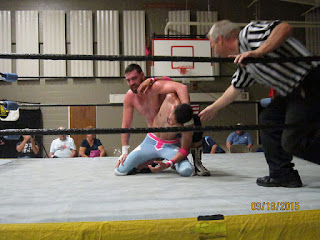 “Tower of Power” Mark Moment defeated Kenyon Mora.  I thought this would be better but the two just didn’t click.

Twin Cities & MEW Champion: Adam Ricker pinned Crash Landing w/ Beavis.  This match wasn’t bad at all, mostly because it was kept to just a few minutes.  Greenleaf did his best to screw it up by botching  clear 3 count saying Crash kicked out, when he hadn’t, that or Crash forgot to kick out, either way it was botched.   Ricker hit the big ending for the win. 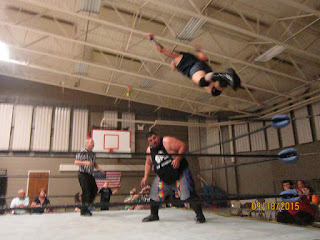 IWE Champion: Alexander Lee defeated “Da Hey Man” Eric Johnson.  I thought for sure that Eric would win the belt back on his retirement tour for one last run as champ and even retire as champion.

All and all not a bad show but my favorite part was spending time with my wrestling friends before, during, and after the show.

IWE comes back to Fairfield November 20th with Robbie E.

Picture are courteous of Philster, click here for the full album.