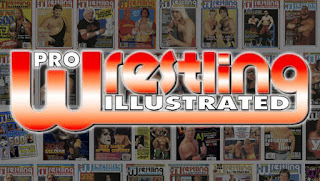 I was surfing around on Wikipedia the other day and I don't recall how I ended up on the page but I ended up on the list of PWI Matches of the Year.  As I'm looking at the list there are several matches I recall watching and I agree with the listings. However one jumped out at me at being on the WWE Network.

One of my favorite sections is the Old School section but they have added very little to it since the launch of the Network.  I love watching the old house shows from Madison Square Garden and other places, including the 70's. Honestly I would love them to post some matches from the 60's if they had any.

The oldest card on Network is from 1975, which coincidentally features the PWI 1975 Match of the year! This was the classic silver rope ring that had the two hard cameras, one at ring level and the other angled down from a section or two up from the other hard camera.  I really like this second camera view.

The seconds clear the ring and the referee checks both men, Arion first, then while checking Bruno Arion pearl harbors Bruno with a right hand then delivers a series of kicks and stomps.  The referee backs Arion up and calls for the bell.

Bruno unloads on Arion with several blows then sends him into the ropes for a knee to the gut.  A few more strikes then a body slam and a two count for Sammartino.  Bruno backs Arion into the corner with some shoulder blocks to the mid-section before Bruno applies a bear hug.

Arion breaks the hold with an ear ringer.  Both men exchange blows from their knees then Arion takes control whipping Bruno into the turnbuckle and falling to the mat.   Arion delivers a series of kicks to the back and stomach. 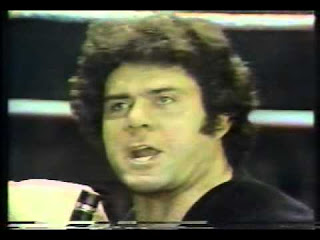 Bruno gets to his feet and crowd comes alive, Arion continues to work Bruno over with blows to the lower back and mid-section.  Arion with a European uppercut good for a two count.  Bruno takes over with a series of punches and kicks.  Bruno gets riled up and the crowd comes alive again.  Bruno  knocks Arion out of the ring to the floor.

Arion slowly gets back in the ring and takes over on offence knocking Sammartino to the floor and then blatantly kicks Sammartino in the junk.  The referee allows this.  Some more kicks from Arion then a body slam for a two count.  The crowd is chanting Bruno with vigorous passion.

Bruno reverses an atomic knee drop attempt with a side headlock and punches to the head.  A series of knees to Arion’s back.  One knocks Arion over the top rope onto the apron, Bruno kicks him to the floor.  Bruno gets on the ring apron and kicks Arion into the ringside barricade, Arion takes a swing at fan.

Back in the ring Arion the kind of lock up with Bruno getting a side choke on Arion, then some more punches and kicks.  The crowd loves it when Bruno kicks Arion in the head while he is down so he keeps doing it.

Bruno locks in a rear chin lock, Vinnie calls it a Boston crab something very similar to it.  We get a rope break so Bruno stands on Arion’s head bouncing up and down while holding the ropes.  The exchange blows in the standing position.  Sammartino used the corner to kick Arion with both feet.

Arion knocks Bruno to the canvas and starts a series of various kicks and then punches followed by more kicks.  Arion goes for an abdominal stretch, Bruno reverses into a nice judo throw, followed by a hip toss and a body slam for a two count.

Bruno grabs a headlock, then is sent into the ropes eating a kick to the midsection.  Arion throws Bruno into the ropes who comes off with a kick of his own.  Another bodyslam by Bruno, Arion gets his foot on the ropes but the referee doesn’t see it.

The match wasn’t bad, but Match of the Year, seems unlikely.

I don't normally do match reviews like this with the blow by blow, but as we are talking about a Match of the Year I felt it necessary.

Other matches on this show

WWWF @ New York City, NY - Madison Square Garden - March 17, 1975 Televised on HBO - featured Vince McMahon on commentary:
Johnny Rodz pinned Bill White at 11:31 with a stomp from the middle rope after White failed a dropkick attempt
Mike Paidousis pinned Jack Evans at 5:43 with a kneedrop after Evans ran into the ropes when Paidousis moved out of the way
Manuel Soto & Pete Sanchez defeated Joe Nova & Hans Schroeder at 22:05 in a Best 2 out of 3 falls match
Chief Jay Strongbow pinned Butcher Vachon at 9:10 with a Thesz Press
WWWF World Champion Bruno Sammartino (w/ Arnold Skaaland) pinned Spiros Arion at 14:51 in a Texas Death match with a powerslam even though Arion's foot was on the bottom rope during the cover; prior to the bout, Freddie Blassie escorted Arion to the ring before returning to the dressing room
Victor Rivera defeated Killer Kowalski via disqualification at 15:58 after Kowalski began biting at Rivera's head; prior to the bout, the Grand Wizard escorted Kowalski to the ring before returning to the dressing room
All American Wrestling - 5/6/84: Ivan Putski defeated the Wolfman via submission at 6:45 with a bearhug (Putski's MSG debut)
Dean Ho & Tony Garea fought WWWF Tag Team Champions Johnny & Jimmy Valiant to a draw in a Best 2 out of 3 falls non-title match; fall #1: Garea pinned Johnny at 1:49 after throwing him off the top rope; fall #2: Johnny pinned Garea at 4:05 with a sunset flip; fall #3: the bout was stopped due to the curfew at 12:13; prior to the bout, Capt. Lou Albano escorted the Valiants to the ring before returning to the dressing room