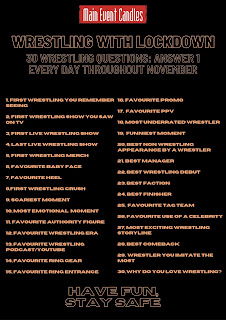 I saw this on Twitter on November 9th, thought it was cool but decided to put it here as I had already missed a third of the month.

I don't have a first time I saw wrestling memory, I just know I've always watched wrestling because my Dad did.  Same with my kids, they didn't discover it on their own I've been watching wrestling with them since they were babies.

You can read my blog post about this show here.

Outside at Skip’s Bar

Dale Dalton pinned Owen Brody with B.A. Tatum with an inside cradle reversing a jackhammer attempt

You can read my full report about this show on my blog here.

It had to be my Hulk Hogan LJN  figure.  However I do remember getting the Wrestling Album VHS and being over the top excited about it.

Ricky Morton of the Rock n' Roll Express has to be the greatest pure babyface of all time.  Yes I know he was a heel as Richard Morton for a couple years but that never worked.

The Four Horseman, when they were bad no one was better. 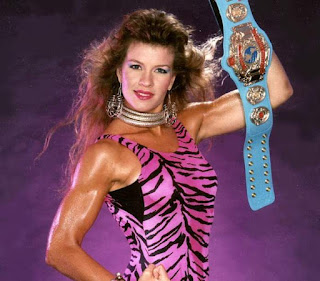 This is very hard pin down because I've watched so much wrestling in my life.  In recent years on live events though I saw a guy do a shooting star press of the top rope and land on the ring post right in front of me and I thought for sure that he was dead.  He was just fine though.

Live at WrestleMania XXIV for Ric Flairs "last match" with Shawn Michaels.  A life long Ric Flair fan it was very emotional for me.

I don't really care about authority figures, I'd rather have my wrestling with out them.  However, Teddy Long was consistent and always gave us some great Tag Team Matches.

Podcast: The Art of Wrestling with Colt Cabana and YouTube: Being the Elite 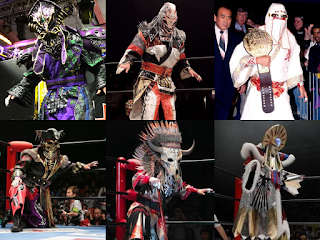 If we are talking everyday entrance not just big events then currently it's Asuka.

That's tough, there are so many great talkers out there in wrestling, today Eddie Kingston is delivering, and Tully Blanchard still has the juice.  Going back in time the Dusty Rhodes Hard Times promo of course stands out.  A few years back Christopher Daniels cut this bad boy before his Ladder Wars tag team match at All Star Extravaganza, incidentally I sat front for that show.

SummerSlam 2002 was an amazing show beginning to end with no bad matches at all.

I can't pick one, but it probably involved Chuck Taylor in CHIKARA or PWG

20) Best Non-Wrestling Appearance By A Wrestler?

probably Batista as Drax in the Marvel Cinematic Universe.

In recent years, Shinsuke Nakamura in NXT against Sammy Zayn 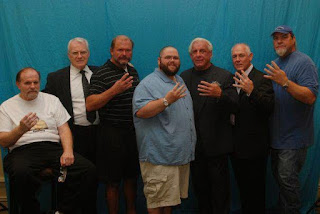 26) Favorite Use of A Celebrity?

Most emotional was told on BTE with Kenny Omega and Kota Ibushi leading toward their tag team match.  Long term story telling that was just great!

Shawn Michaels, has to be Michaels coming back after his back injury.  Although if Covid hadn't been a thing Edge would most likely have taken that accolade.

29) Wrestler You Imitate the Most?

30) Why Do You Love Wrestling?

I can't this easily, I just do and I love it so very much!