This batch of signed trading cards feature cards that I designed using the Iphone & Ipad app called Rookies.  The app is baseball themed however you can design the front and back of the card yourself with multiple options.  You buy cards in packs of 20 and it can be one single card or 20 different designs, they cost $13.99 a pack plus shipping, it's less than $1 a card. 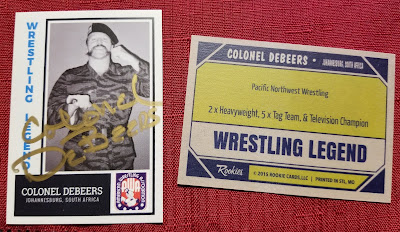 Trained by Harley Race he debuted in 1973.  He entered the AWA in 1985 where he competed until 1991 when the promotion folded.  I am most familiar with DeBeers from his time in the AWA specifically his feud with Scott Hall where DeBeers accused him of using Steroids.  Which he probably was. 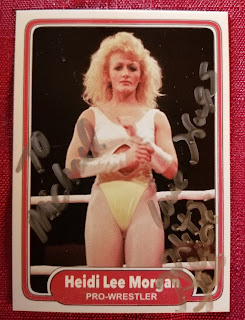 A second generation wrestler Heidi Lee Morgan debuted after training with the Fabulous Moolah.  She made history in May 1987 when she challenged Wendi Richter in the first known women's Steel Cage Match for the NWF Women's Championship.  She held the LPWA Tag Team Championship with Misty Blue Simmes and was defeated by Alundra Blayze in the finals of the WWF Women's Championship tournament. 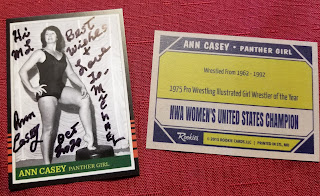 Trained with The Fabulous Moolah debuting in 1962.  She held the USA Women's Championship from 1974 until she retired from wrestling in 1992. 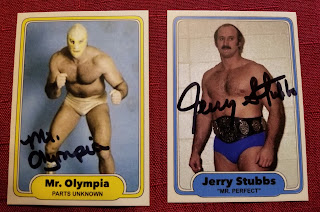 Mr. Olympia Jerry Stubbs
Stubbs debuted in 1970 under his own name.  Later in Mid-South Wrestling he wrestled as Mr. Olympia, even teamed with Arn Anderson who wrestled as Super Olympia.  As the story goes, Stubbs was the original Mr. Perfect and explained the concept to Curt Hennig.  I sent him the cards above and he sent me back all the pictures below. 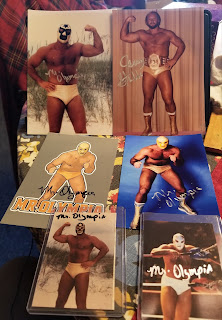