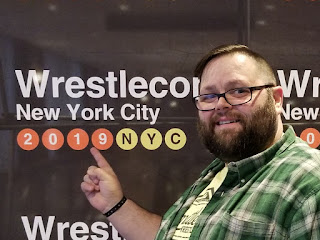 Back on June 24th I turned 40 years old and honestly I'm having a hard time with it.  Over the years I have I've picked up and put down a lot of interests and hobbies, some of them I just lose interest in and others I feel like I'm "too old" for.  One thing that I have never given a single thought to stop watching is professional wrestling.

My love of wrestling has never waned, in fact my passion for professional wrestling has grown over the years.  My collection of wrestling memorabilia and collection habits has changed tremendously though.  Beginning with getting my first job and driver's license at age 16 and until the majority of my collection was destroyed in a basement flood I collected everything and anything wrestling that I could get my hands on.  Side note, you can read about the flood and how it lead to me getting a tour of Titan Towers here: My Tour of Titan Towers.

My buddy Jay and I had a weekend route that we would take hitting up a half dozen flea markets, KB Toys, yards sales, and other places looking for anything wrestling.  After the flood wrecked everything I became a bit depressed and really thought what do I need with all this stuff anyhow.  At the end of the day no one cares about it besides me and the reason it was in the basement to begin with is because when we moved into this house I didn't have a space of my own to display it.  Before have kids I had a wrestling room where I stored it all, now I didn't have that.

My collection is much more scaled down and I'm a lot more selective about what I spend my money on.  Especially when it comes to wrestling figures, they are so damn expensive now!  The two things that I collect the most are my ticket stubs from events that I have attended and my signed trading cards.  I also have a large collection of wrestling related books and DVD's, however, my I don't buy nearly as many DVD's as I used to.  I like to buy wrestling documentaries over full events.

My favorite time of wrestling to watch is the mid 1980's Jim Crockett Promotions / NWA at the height of the Horsemen.  There is just something about the style of wrestling that appeals to me the most.  My buddy Jay and I over the last 25 years frequently talked about how great it would have been to go to a Jim Crockett Promotions / NWA event or an AWA show.  Sadly we never made the journey to see the original ECW, a regret.  Hell it took us 24 years to go to finally go to Madison Square Garden.

I do feel fortunate though that I was able to attend two WCW shows in the late 1990's.  Nitro in Boston on June 9, 1997 and a WCW Saturday Night taping in Portland, Maine on May 19, 1998.  I've also attended two TNA shows first on June 24, 2007 at the Hampton Beach Casino Ballroom in New Hampshire and then on December 4, 2009 in Portland, Maine.  In the last three years I've attended four Ring of Honor shows, two Pay Per Views which I had front row for, and two house shows including their debut in Maine.  I also attended the NJPW & ROH G1 Supercard at Madison Square Garden.  I'm not sure how other people feel about it but I really like going to shows from different promotions.

At this point in my wrestling fandom I still have a list of wrestling events, wrestlers, promotions, and venues that I want to go to and see.  Some of them are more realistic than others but here goes:

Go to a show in another country, to expand on this I also want to attend any Lucha Libre show in Mexico. I'm spending 4 nights outside Ottawa, Ontario, Canada this September and I'm hoping to check this one off

A lot of historic wrestling buildings like The Omni & The Sportatorium have been demolished.  Others like the Greensboro Coliseum and Cow Palace no longer run wrestling shows with regularity. Venues I'd like to see a show at include: ECW Arena, Maple Leaf Gardens (now Mattamy Athletic Centre) and the Hamburg Fieldhouse & Mid-Hudson Civic Center where WWF taped their television shows.  Pipe dream venues are the Tokyo Dome, Korakuen Hall, and Arena Mexico.

Promotions and events I want to go to include: an official NWA show, Chikara's King of Trios, any PWG show but Battle of Los Angeles specifically, Progress Wrestling, CZW Tournament of Death, and others.

The list of wrestlers I want to see wrestle live that I haven't is huge but there are some more than others including: The Rock n' Roll Express (this door is closing), British Strong Style, Toni Storm, Jimmy Havoc, The Von Erichs, Rickey Shane Page, Josh Alexander, Christi Jaynes, and so many more.

So far I have been to 240 wrestling events in 11 different states.  I once had considered trying to go to a show in every state but that would be very expensive, so now if it works out then it works out.  For those wondering its Maine, New Hampshire, Vermont, Massachusetts, Connecticut, Rhode Island, New York, New Jersey, Pennsylvania, North Carolina, & Florida.

I've seen a lot in wrestling over the years and I feel very fortunate for the shows I have been to and the places I have been.  As you can see there is so much more that I want to see and experience. 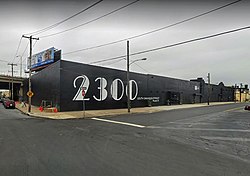 Talking to my friends our next big wrestling trip is going to the ECW Arena.  A couple times a year they have a wrestling convention during the day and a wrestling show in the evening. That is what we are looking at doing as it makes the trip there worth it.

Until next time!
Posted by Michael J. Labbe at 6:43 AM