Here are some through the mail successes that I've had. 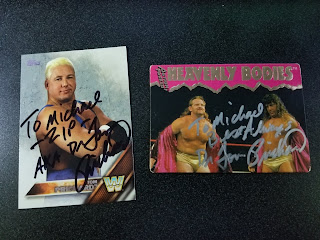 I mailed these cards on March 1, 2019 and got them back signed on March 8th!  This is the fastest turn around I have ever had when I've mailed cards to someone.

The card on the left is from the Topps 2016 WWE Then, Now, Forever set and shows Prichard as his character Zip when he was one half of the Body Donnas.  The card on the right is from the 1995 WWF Action Packed card set.  Sadly Jimmy Del Ray passed away in 2014. 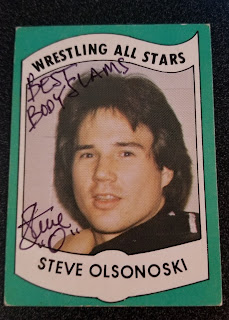 Steven Olsonoski was trained by Verne Gagne and debuted in the AWA in 1978.  He is known for this time in the AWA and Georgia Championship Wrestling.   This card is from the Series A 1982 Wrestling All Stars trading cards set.  I mailed this out on April 29, 2019 and got it back on May 17, 2019. 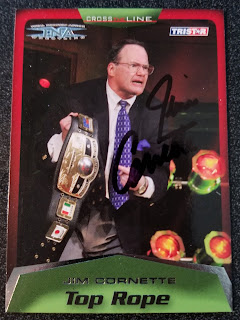 One of the greatest wrestling personalities of all time that I have thoroughly enjoyed over the years.  I already have a few cards signed by Mr. Cornette but when I came across this card of him holding the NWA World's Championship I just had to ask him to sign it.  To me he is synonymous the tradition of the NWA and it just seemed fitting.  This card is from the 2008 TriStar TNA Impact Cross the Line series.

Until next time!
Posted by Michael J. Labbe at 4:46 AM