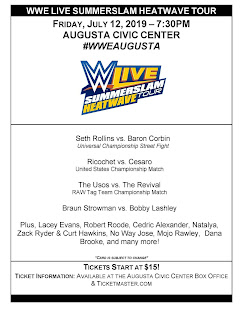 For the third year in a row the WWE returned to the Augusta Civic Center for a night of wrestling.  WWE comes to Maine at least once every year and typically it's in Portland and Bangor but they go through spurts running in Augusta: 1996, 2002 & 2003, 2012 & 2013, and 2017 - current.  It's a great venue for wrestling, WWE even had a TV taping here back on December 15, 1993, and my favorite part is that it is only twenty minutes from my house. 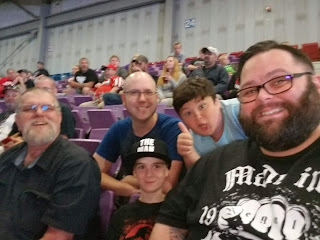 In total five of us went to the show, my son Canaan, cousin Paul, my nephew AJ who is 8 years old and attending his first ever wrestling show, and for the first time since June 4, 1989, my Dad.   We grabbed some dinner at the KFC before the show.  If you get a chance try to Cheetoh's Popcorn Chicken, holy cow it's good!

We got the venue and our seats, we have a great view of the ring and entrance way and could appreciate all the nights festivities.  As it was AJ's first show I bought him something from the merchandise table, he wanted a hat and with three to chose from, Cena, Reigns and Becky Lynch he went with The Man. 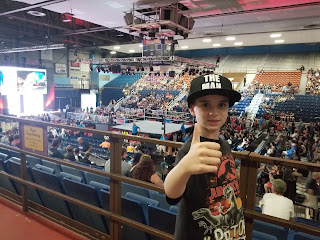 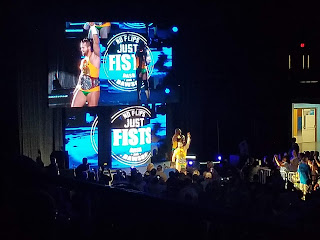 I was the most excited to see The Revival tonight, it was my first time seeing them live and they have a reputation of putting on killer house show matches.  Tonight was not one of them.  The match with the former Major Brothers was just okay and after Ryder hit Rough Ryder on Dash and Dawson pulled the referee out before he could complete the three count with generate the DQ.  This frustrates me to no end as on TV or PPV the ref never calls for the bell. 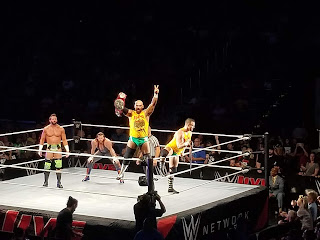 The Viking Raiders came down and attacked Hawkins and Ryder with The Revival.  The Usos ran out and made the save which lead to... 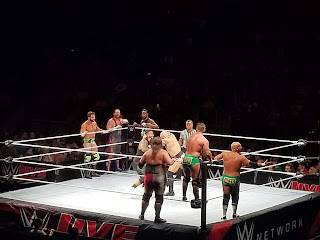 The Revival wanted no part of this match but were coerced into it by the Vikings.  This was a much better match than the opening one.  After several minutes we got one of those fantastic everyone takes turn hitting a high spot on someone spots and that lead to and Uso pinning Dash after a splash from the top rope. 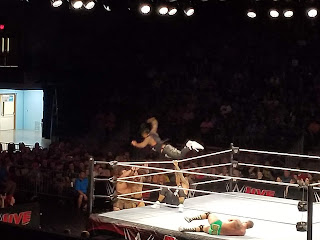 Mojo sorta looks like and indy jobber with his black MVP style gear and lightning face paint.  This match felt longer than it was but the pin came out of no where with a quick roll up. 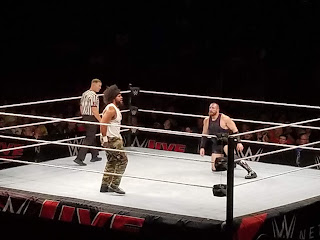 Mojo cut a promo calling Augusta Disgusta, he's not wrong, and saying he's not going down like and issued and open challenge which lead to...

Mojo jumped Titus as he got in the ring beating him down in the corner.  The ref made Rawley step back allowing Titus to get up and he called for the bell.  Not to long later we got Clash of the Titus and a three count 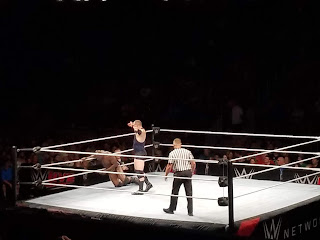 Mojo cut another promo, once again saying he wasn't going down like that.  These promo's were actually quite hilarious and well done.  Braun Strowman answered the challenge this time.  After Braun got in the ring Mojo said he challenged any man and as Braun is a monster he can't answer the challenge.  Mojo then tried to attack Braun and...

Not much to say, he hit him a couple times and nailed Mojo with the powerslam for the pin.  Braun was scheduled to wrestle Bobby Lashley tonight but he didn't appear.  The fans were super pumped to see Braun.  After the match he signed a lot of autographs at ringside making his way to the back.  It's nice to see the wrestlers doing that. 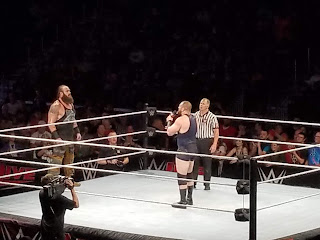 Talk about two throw together tag teams, but I enjoyed the match and it's all thanks for Dana Brooke.  She spent about five minutes in the ring, looked awesome on offense with some great acrobatic moves and sold her ass off on defense.  I would love to see her on TV for more than a minute in her matches. 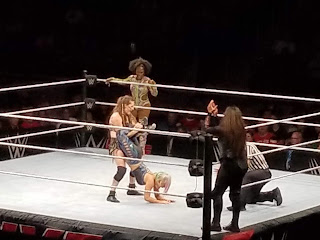 Dana timed her hot tag to Naomi perfectly who came in and cleaned house getting the pin on Tamina after a split-leg and moonsault.  When Naomi landed her knee struck Tamina right directly in the face, it was wicked!  Naomi knew straight away something was wrong and after the three count alerted the referee who looked at Tamina and threw up the X.

She lay in the ring for several minutes while medical staff attended to her.  She eventually left the ring on her own power but it was nasty.  I'm glad she appears to be okay. 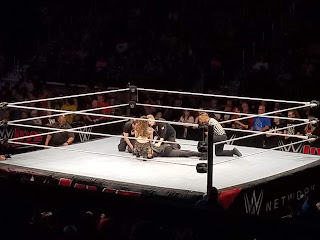 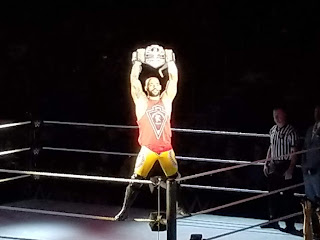 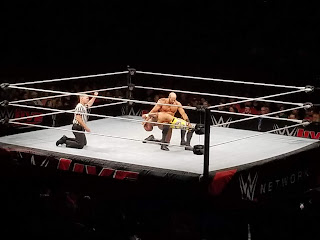 This was a great match as I expected it to be.  The action was fast paced with Ricochet showing off his high flying mastery and Cesaro his technical prowess and uncanny strength.  Ricochet got the pin after a standing shooting star press. 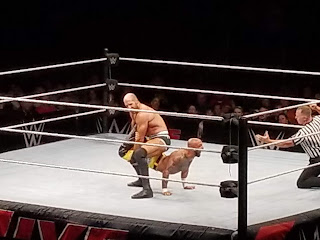 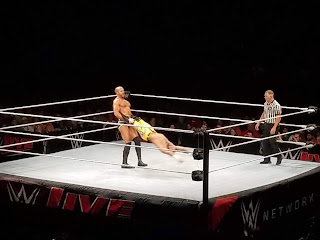 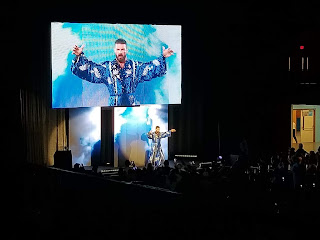 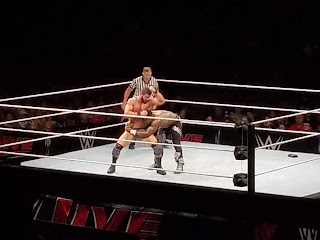 Another really good match that was far more competitive than I thought it would be, but with Cedric getting the clean pin after a lumbar check it appears that he is in for a push.  He hasn't done much of anything since leaving 205 Live for Raw brand. 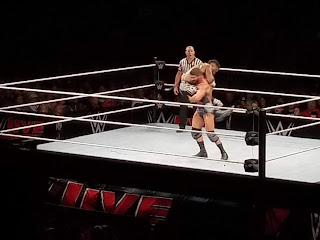 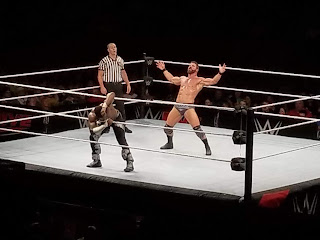 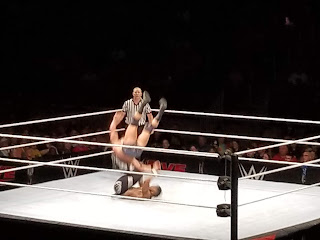 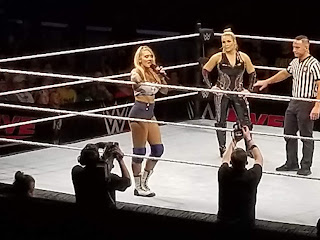 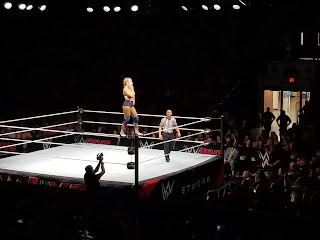 My Dad was super excited to see Lacey Evans, he's a big fan.  Me not so much, but she is getting better and look good.  I really think that Natayla needs to leave the promotion and wrestle elsewhere.  Right now all she does is put people over, which is fine but I think she could do well for herself on the indies or even in AEW or Impact. 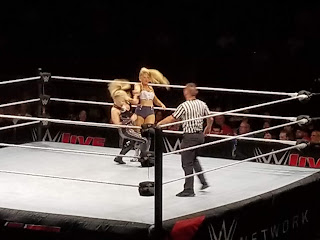 This was billed as an Augusta Street Fight, but I've seen actual street fights in Augusta that were better than this.  They barely fought outside the ring, the didn't even break the rules and when the kendo stick was introduced Corbin gave Rollins two weak ass shots across the back that could barely be heard over Corbin stomping his feet, same thing for the single chair shot the back that made a barely audible "tink" upon impact. 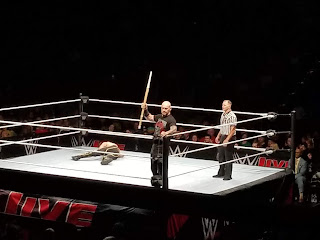 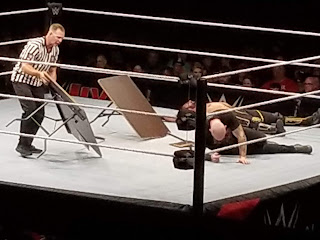 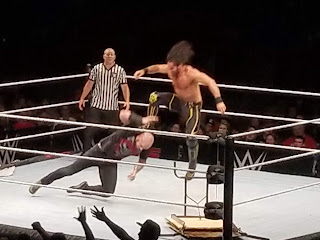 Yes they broke two tables but they were pre-cut and it was not impressive.  Just don't have a street fight if this is what you are going to do.  Just have a normal match give us a good wrestling display.  This is precisely what turns me off to WWE house shows, when the main event talent just goes through the motions.  These two guys looked like they were rehearsing at the PC in front of no one.  Rollins pinned Corbin after a curb stump. 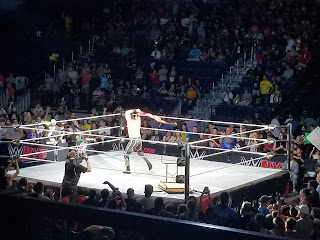 In the end though we all had a good time and AJ loved the show, and that's all that really matters, that the 8 year old had fun and his first live wrestling experience was a positive one.

WWE is returning to Bangor and Portland at the end of August, I will not be going. Not because of this show but because of work and other plans I have.

I took all the photos with my phone and the match times are from @CPGOAT on twitter.

Until next time!
Posted by Michael J. Labbe at 4:42 AM