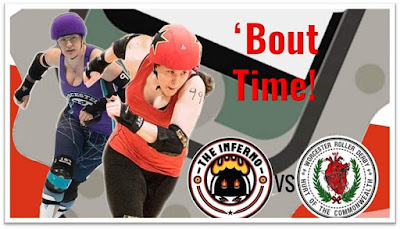 Kate, Wesley, and I made the short drive to Auburn for the Androscoggin Fallen Angels home opening bout of the season as The Inferno took on the Hurt of the Commonwealth from the Worcester Roller Derby League of out Massachusetts.

I'm not privy to insider information but it appears as though the AFA has shifted their home venue from the Lewiston Armory to the Norway Savings Bank Area in Auburn.  I love the Armory, it's a fantastic building but this is a great venue.

Located next to the Auburn Mall behind Shaws it has two ice rinks inside it.  The second floor has a concession stand called the Upper Level Pizza & Grill with a full menu of food and snacks and the prices are very reasonable compared to other venues.  They also have some video games and air hockey plus the old school hockey games.  More importantly though they had a pinball machine, Creature from the Black Lagoon, and I played a couple games. 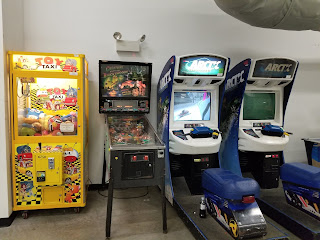 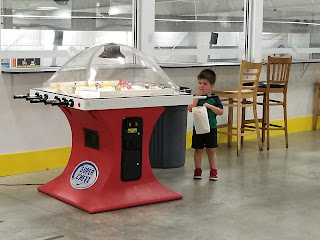 Another cool thing about the venue is that if you can't go to the bout you can live stream it, or anything they have going on, on LiveBarn.com just search for the venue.  I'm not sure if it's just a hard camera on the ice, but it's a cool feature. 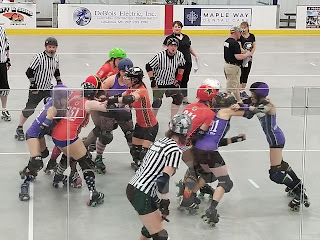 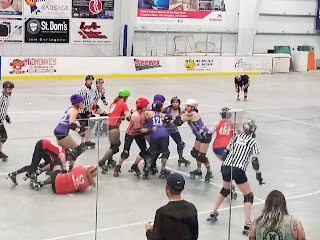 The bout today was excellent!  Very hard hitting and competitive play between both teams.  Queen Bootycca was on fire today as the jammer.  Many times you'd see her tip toeing around the blockers right on the line to get passed them to score.  It earned her to top jammer honor for the game for her team.  Hoots got the top blocker honor and others that stood out included Taco Badger and Slim Katie. 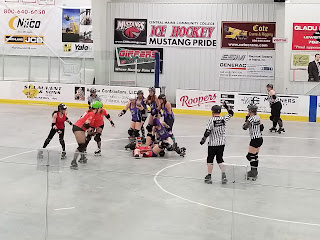 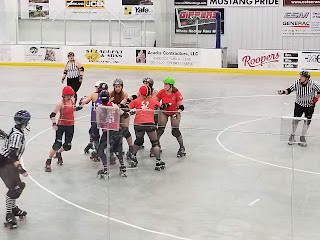 Standouts for Worcester included Pocket Rocket, the top jammer, and Alysin Wonderslam who were jammers for the team and Nancy Drew Blood was voted the top blocker of the game.  There were a lot of other great players, I'm just not familiar with them all. 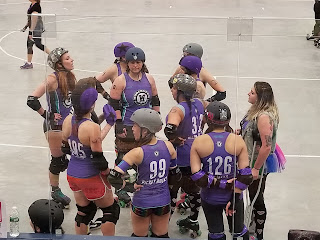 I'm not doing the ladies justice with my memory of the bout, as there was a lot of hard hits and some great game play.  The top blocker and jammer awards are voted on by the opposing team, so Infernos voted for Commonwealth and vice versa. 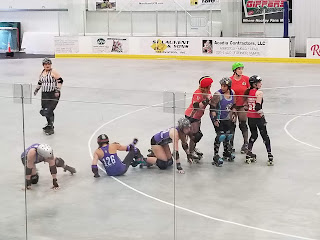 At the end of the first half the game was quite close, but in the second half the Inferno's really turned up the heat and took a strong lead the just kept climbing until the final jam.  The Inferno won their home opener with a score of 141 to 104.


I can't stress this enough as to how much fun it is to go and watch this live.  This is out 4th bout and the more you watch the more you pick up on the little things that go one out there on the floor.  They had a good crowd in the building tonight and they got loud whenever the Inferno took command. 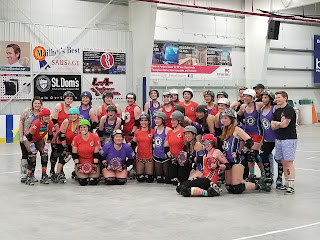 You can show your support for both of these leagues at their links:

Worcester's next bout is June 23rd as their team the Triple Deck-Hers travel to Hoosick Falls, New York to play the Soutshire Roller Derby.

Until next time!
Posted by Michael J. Labbe at 2:08 AM