About a month ago I was looking through the Hidden Gems section of the WWE Network and found the Star Wars 1981 World Class Championship Wrestling event.  I was pretty excited to find this because I've never seen it before and I'm a fan of the old World Class wrestling. I was also surprised it wasn't in the World Class section. 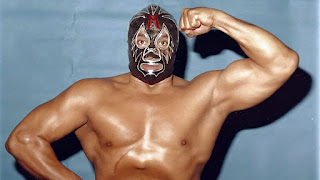 Mil looks pretty good here, of course he is only 39 years old.  At the time of this match if you threw your opponent over the top rope you were disqualified.  The highlight of the match was Brooks throwing himself over the top rope in the corner trying to claim a dq victory.  Mascaras took three bumps in the match and no sold all three.  Finish came with Mascaras coming off the top rope with a flying body press. 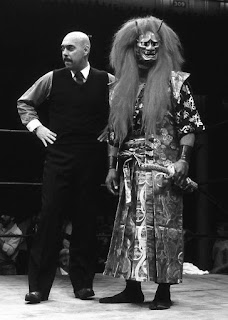 No Disqualification
Fritz Von Erich vs. The Great Kabuki with Gary Hart

So this match was terrible. Highlight of the match was when a fan tried to attack Gary Hart and Gary leveled him, it was tremendous!  Fritz was in trouble with Kabuki dominating, so David ran in attacking Kabuki nailing a devastating back body drop and the Fritz got the pin.  Yup.

21 year old Kerry Von Erich was green as grass in this title opportunity.  Match was pretty clustery but it was a decent match.  Bronco Lubich was a terrible referee, just terrible.  He was slow, got in the way, just bad.  Harley was great, some classic Harley comedy with him selling the after effects of a sleeper hold and tumbling through the ropes. 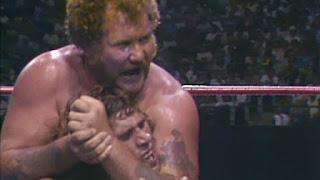 Finish came when Harley bodyslammed Kerry on one of the ringside tables and then attempted a falling headbutt, but Kerry moved.  Both men were then counted out of the ring even though Kerry was three quarters of the way back into the ring when the referee finished the count.

WCWA World Heavyweight Tag Team Championships
David & Kevin Von Erich vs. Champions: Hercules Ayala & Ali Mustafa
The tag team championship was represented by a single large trophy.  Also Kevin is wearing boots in this match!  This match was a struggle of styles in the worst way.  You had the young Von Erich brothers who wanted to work a fast paced high intensity match that the crowd was very much into, and the big, slow, and plodding Ayala & Ali just slowed it right down.  But not in that good wrestling psychology way of slowing things down to build them back up, they just didn't want to move.
The Von Erich's won the title with a sunset flip.

The winner would receive $5000!  It looks like about twelve wrestlers in the match, you could be eliminated by pin fall or being thrown over to top rope to the floor.  Bruiser Brody won a very lackluster Battle Royal.

At the beginning of the matches the fans would gather around the ring for autographs from the baby faces, however when Kevin and David were in there the fans surrounded the ring and climbed up on the ring apron, it was pretty wild! Really showed just how popular they were with the fans.

There was only one camera that was used for the match, the hard camera but it would zoom in and move around following the action.  It came out very well.  I don't know who was calling the action, but it was a one man booth and he felt the need to talk non-stop and at times it was rough to listen too.

According to cagematch.net there was one other match on the card with Chang Chung defeating Bruiser Brody.  If you chose not to watch this then you are missing out on nothing.