35th Anniversary of The Last Battle of Atlanta

I found this entire card in the Hidden Gems section of the WWE Network. 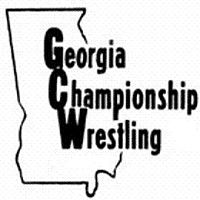 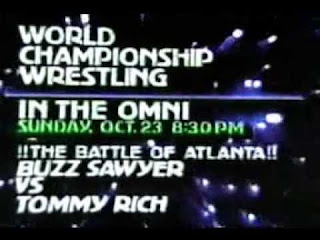 Over a year ago the WWE uploaded just the main event of this card on the network.  They just recently put the entire card up just in time for the 35th Anniversary of the event.  There are no commentators for this event and it is shot with just one camera.

The camera appears to be very high up and zooms in and follows the action.  Occasionally fans will block the camera, especially when the action spills to the floor.  It was a hot crowd most of the night, especially for the main event.

Lightfoot worked a cravat or head chancery for the majority of the match.  I've never seen this before and it was tremendous!  He'd work the hold and Thornton would try to reverse it numerous was and Lightfoot would just reverse it right into a snapmare and into the cravat. 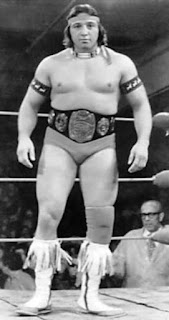 Finish came when they Joe tried to reverse out of a full nelson and Thornton sat down on him for the pin, similar to when Owen beat Bret Hart at WrestleMania X.

Short match, Bruno Jr or David took control early working the arm, then it became a lot of punches and kicks.  Finish came when Sammartino caught Rose coming off the ropes into a powerslam for the three count. 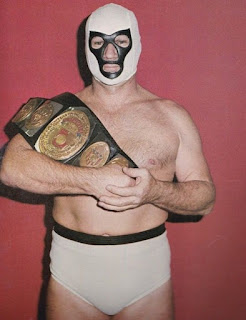 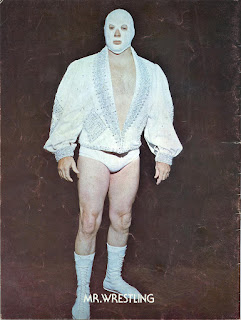 Roop finally took control jabbing Wrestling  II in the stomach with Wrestling I's crutch while the ref was distracted.  Roop held control until Wrestling II reversed a fireman's carry into a roll up for the pin to a huge ovation.
Mr. Wrestling tried to get to the back but the ref cut him off in the aisle.  Wrestling II then ripped his mask off quite easily and Wrestling I pulled his shirt up over his head.

I'm not familiar with Brett Wayne but he appeared to be a foot shorter than Roberts and it looked odd. Robert worked the left knee for the majority of the match and seemed more interested in punishing Wayne than getting the win.  Wayne was busted open at some point.

Ole Anderson came out, he appeared to be trying to talk Wayne into giving up.  Anderson threw into the towel and the referee called for the bell.  The ring announcer then declared that the title can only change hands by pinfall or submission so even though Jake won the match Wayne retained the championship.

Ole and Mr. Wrestling II carried Wayne to the back.  All in all it was a decent match that started out very slow.  Post match it Buzz Sawyer and Roberts had an intense stare down in the aisle until Roberts walked away.

Hart was talking trash to Garvin before the bell when Garvin leveled Hart with a big right hand, much to the delight of the crowd.  Very slow match, Kabuki must have worked the dreaded trapezius hold for five minutes.  Kabuki got the pin after a distraction fro Gary Hart.  This match wasn't very good at all and at over 15 minutes was way too long.

This match never got started really and was a wild brawl right from the get go.  All four guys fought in and out of the ring and I can't recall the Warriors taking such a beating from anyone.  The referee disqualified the Warriors even though both teams should have been disqualified. 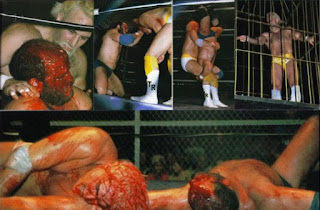 The cage wasn't very tall and was unique because it had a roof on it and the wrestlers could grab the roof if they wanted too.  Paul Ellering was suspended in a cage over the ring to prevent him from interfering. This was a wild and bloody brawl and there was no referee in the ring.  The ring announcer would deliver the count verbally.  Rich got the win pinning the exhausted Sawyer. 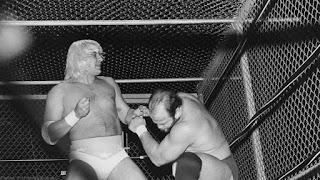 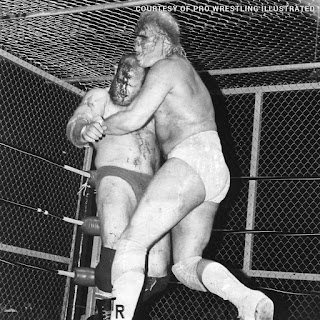 Because Rich won Anderson got his hands on Ellering in the ring.  Ellering was busted open every early one.  For most of the match Anderson just beat the dog piss out of Ellering.  Ellering did get some offense in after an inverted atomic drop that took Anderson out of it.

This was a card that was definitely built around that Sawyer vs. Rich cage match and the crowd couldn't have been more into it.  Except for Kabuki vs. Garvin the card aged well with the matches still being enjoyable.  I'm an old school fan and I enjoy some blood and guts in my matches.

Later Readers!
Posted by Michael J. Labbe at 7:35 AM