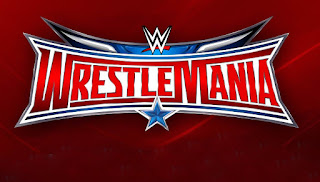 I always get excited for WrestleMania every year and leading up to it this year was no different.  Sadly though I must have watched a different show than others in my Facebook food because I didn't watch a show that was awesome, insane, spectacular, amazing or any other accolade that makes a blanket declaration stating the entire show was tremendous, because it wasn't.

The pre-show started at 5pm with the first match starting around 5:45pm and the main event ended about 10 minutes of midnight.  That's pretty near a 7 hour event which is very long.  I'ts a good thing I had coverage at work until 1am and not midnight.

Including pre-show and the Rock's impromptu match the card featured 12 matches.  The three pre-show matches were better than I thought they would be. 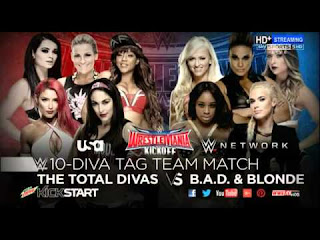 As much as I hate to admit this, the sequence that Brie used to set up the Yes Lock was actually really, really good.  Lana makes her in ring debut, didn't do a lot boy she looks different with her hair down. 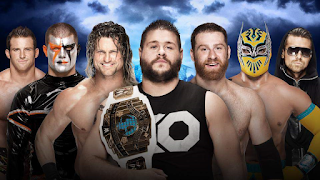 The main show was kicked off with the 7 Man Ladder Match for the Intercontinental Championship.  It was a good match, the last guy I thought was going win it did in Zack Ryder.  He's worked hard for the company for a long time and deserves to have this big moment at WrestleMania.  I can't imagine he'll have a very long title run. (Note: He lost it to the Miz the next day on Raw.) 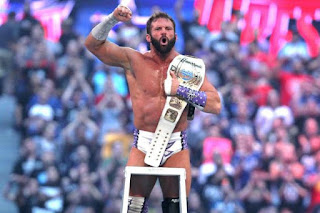 It's was bullshit that Jericho got the win of Styles.  First off it looked like Jericho purposely had a bad match.  It was more than just the timing was off, or they weren't clicking because when it came time for Jericho to look good he was spot on.  However when it was Styles turn Jericho was slow and off a step.  This is their 4th singles match, one we didn't need to begin with, so does this mean we have to watch them have 1 more match together at the next PPV, god I hope not!

League of Nations beat New Day, it was Four on three they should win.  As much as I loved seeing HBK, Austin, & Mick Foley come out and beat down the League it basically made their win look worthless.  I will say I marked out big time seeing HBK in his wrestling gear.

Brock Lesnar defeated Ambrose in a Street Fight.  Not much of a street fight, some chairs, a kendo stick, and a whole bunch of suplexs.  It was basically an extended squash. 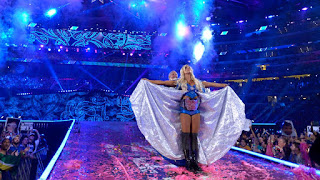 Triple Threat Match: Women's Champion: Charlotte defeated Sasha Banks & Becky Lynch when Becky tapped to the Figure-8.  In my opinion this was the best wrestling match of the night.  It was damn good and it stole the show.  Charlotte came to the ring with the Diva's Championship and left with the Women's Championship officially ending the Diva's name that I have hated since they started it.  Sasha got the big entrance with her cousin Snoop Dog rapping her to the ring. 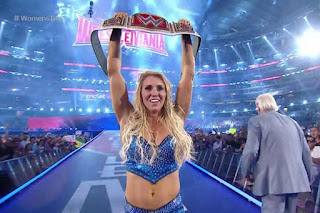 Hell In A Cell: Taker beat Shane, I found surprising because storyline wise it seemed Shane was destined to win so he could take over Raw.  If you take out the part where Shane jumped off the top of the cage to elbow drop Taker on the announce table, it wouldn't be as good of a match.  It was a spectacular spot and I really enjoyed the match but it wasn't great. 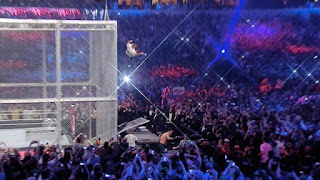 I would never guessed that Baron Corbin would win the Andre the Giant Battle Royal, he had no build up, just walked to the ring with the others that were unannounced and came away with the win.  I wonder if this means he is on the main roster now?

Rock had a really long segment where he announced the attendance of the event.  Then the Wyatt Family interrupted which lead to an impromptu 6 second match where Rock beat Eric Rowan.  Then Cena made a surprise return aiding Rock in yet another Wyatt Family beat down. I could have done with out the whole segment.

Roman Reigns beat Triple H for the WWE World Heavyweight Championship, of course that's not a surprise to anyone.  The crowd booed Reigns after his win and during his celebration.  The only pop for Roman is when he accidentally speared Stephanie, because if there is anyone they hate more than Roman is Stephanie McMahon. 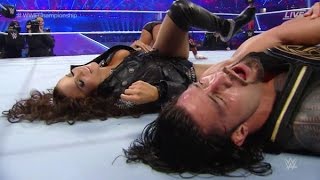 I realize there are a lot of people that really like WrestleMania, and that's cool, I just don't agree.  There were aspects that I really liked about it, aspects I didn't like at all, It has nothing to do with the outcomes not being what I wanted them to be.

The best part about Mania was Paul coming over and us watching it together and that chat group with the other guys.