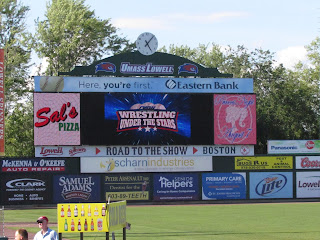 On Sunday August 2nd Northeast Wrestling presented “Wrestling Under the Stars” in Lowell, Ma at Lelacheur Park where the Red Sox A ball club the Lowell Spinners play.  When this show was announced I was interested in going, not for Rey Mysterio, but for The Young Bucks!  They are so hot right now across the country and in Japan.  Also I had never been to a Northeast Wrestling show and have wanted to for some time.

Eventually tickets were bought with Mikey, Roy, & I deciding to go to the show.  We left Sunday morning for the 2.5 hour drive not stopping until we made it to Lowell.  I had wanted to try this place called Elliot’s Lunch Cart that is a Hot Dog joint that has been around for years but they were closed.

We got parked back over the stadium and walked to a place called Brother’s Pizza, it was sketchy so we settled for Lowell Beer Works.  The food was good, but my Burger was deceptively small.  Roy got the breakfast as they serve brunch until 2pm.  The waitress was very slow and we didn’t get back to the park until after the gates opened.

The meet and greet was set up the worst I have ever seen.  The wrestlers were set up downstairs in a circle and I can see why they thought it would be a good idea.  That way you could go from one person to the next to get your autographs and photos and what not.  If you wanted to get down to the meet and greet they had one line that lead down to it and the first wrestler you came to was Rey Mysterio Jr. Now admittedly the majority of the people there wanted to meet Rey, however if you didn’t want to it didn’t matter because you had to wait for everyone else that did to get by him.

It was so dumb!  At every other signing I have been to you go into the area where the wrestlers are, they have their tables and you go to who you want to see, not one big line for all.  It took two hours for us to get down to the meet and greet area. 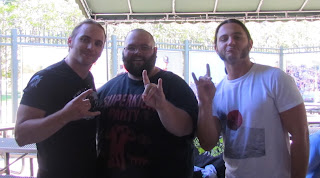 I got all my cards signed by The Young Bucks, a picture with them.  One with Michael Bennet and Maria, and one with Dijak  Nick Jackson did this video I posted a couple months back called Nick Jackson’s Birthday Bash and when I asked him about it he says it was an homage to a video that Kenny Omega did. 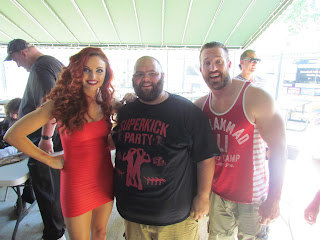 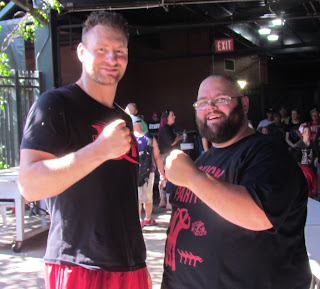 I thought the matches would start late, and they did but only 15 minutes.  They opened with a ten bell salute to “Rowdy” Roddy Piper who had passed away Friday.  The show featured 8 matches and an intermission that stretched to 30 minutes with the show ending at 8pm.  Highspots was there with their variety of merchandise as well as a couple other vendors.  Mikey and Roy picked up 4 – 5 DVD’s each, Roy is quite addicted to buying wrestling DVD’s.

At one point in my life I was addicted to buying everything and anything wrestling.  However, after the flood destroyed my collection I began to realize that having anything and everything didn’t really matter.  I still have quite a nice collection of wrestling memorabilia however I am much more selective of what I spend my money on.

It was a great night of matches, with The Young Bucks vs. The Kingdom & Dijak vs. Flip Gordon being the best two matches of the evening.  All the matches were very good, even though Samoa Joe was just going through the motions.  He’s got a deal with WWE and he’s finishing up his indy bookings so I guess I can’t blame him for not wanting to get injured in front of 2000 people in Lowell on a one off appearance. In the ladies match Alexxis worked her butt off playing the heal while Mickie James was kind of going through the motion as well.

Dijak is a big dude and he’s got a great future in wrestling.  He’s agile and moves like a smaller guy.  He’s gotten a lot better in the ring and we will see him in the WWE one day.  I had never seen Flip Gordon before but he was great in the ring with some awesome aerial offense.  I’d really like to see him again in the future. 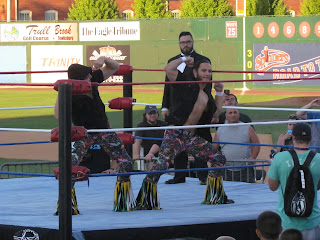 The Young Bucks were fantastic and the hometown boys of The Kingdom were way over.  It looked like Taven got legit injured in the match but he powered through and both team delivered. 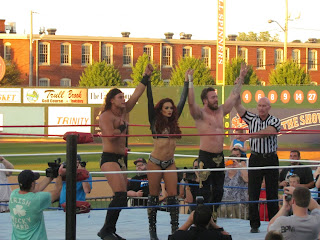 The main event triple threat was carried by Alberto El Patron who came out to a big ovation and when full heel on the mic before the match.  Rey won after hiding on the outside of the ring for the majority of the match.  The match was better than I thought it would be, but Rey still managed to piss me off. 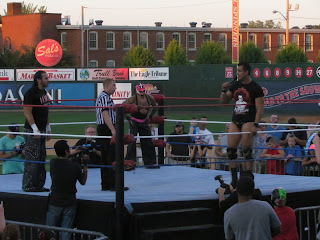 After the matches we headed a mile down the road to Jimmy John’s to get Kate her favorite sandwich.  The website said they were open until 10pm but at 815pm the lights were off and doors locked up tight.  We went to go to another place across the street but they had no restroom, that wasn’t going to work for any of us.

We ended up jumping on 495 North and when I realized that we would be passing the Cracker Barrel just a couple miles down the road, and that it was Sunday I knew that we were stopping.  Not to mention that neither Mikey nor Roy had ever been to Cracker Barrel.  Exit 39 was the exit we wanted, and of course the ramp was closed due to construction.  We had to go a few miles up the road and exit onto 93 which looped us back onto 495 South, but I had Mikey call to make sure they would be open.

Back in 2009 Jay, Rood, and I went to Webster, MA to meet Ric Flair and get out picture taken with him for the first time ever.  On the way home we stopped at this very same Cracker Barrel, it was a Sunday and that was when I learned that the Sunday special is home style fried chicken!  Two boneless chicken breast dipped in buttermilk and breading and fried to golden brown perfection!  It’s only available on Sunday’s which is why I made the executive decisions that this is where we were going to eat.

Mikey also got the chicken but Roy went with the breakfast sampler.  Roy is a big fan of Breakfast and the Barrel serves it all day every day.  I brought Kate home 4 biscuits and apple butter at her request.  The chicken was so delicious!

We made it back to my house about midnight the end to a great day.  I look forward to our next wrestling adventure.

Here is the Facebook link to all my photos: Northeast Wrestling Album 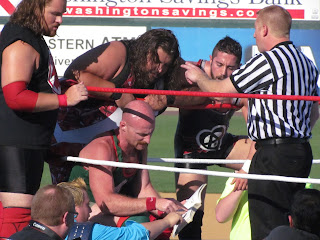 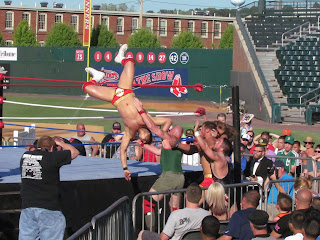 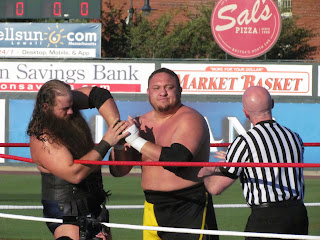 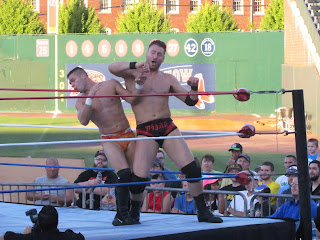