I realize I haven’t done a post on any new trading cards in a while, but I haven’t gotten any new ones.  I suppose I could go back and highlight the other cards that I have any perhaps I will do that in the future.

On Sunday August 3rd I attended Northeast Wrestling in Lowell, MA on the card that night were the one and only Nick & Matt Jackson, the Young Bucks!  I spoke with both of them for several minutes and they were really nice to talk to.  I had these TNA cards from India of them that they had never seen before so I gave them to them.  Matt immediately took a photo and posted it on twitter. 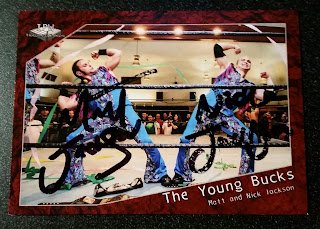 This card is from a set called Independent Pro Wrestling or IPW that was released in 2015 by a gentleman in California.  A very limited release I was lucky to get my hands on this one and a few others from this set. 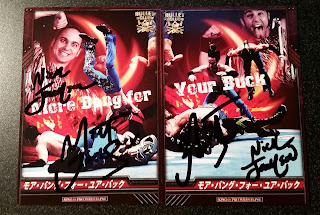 These two cards I bought on ebay from a seller in Japan.  Put together these cards reveal the finishing move “More Bang for Your Buck”.  They were released in 2014 as part of the King of Pro-Wrestling card game in Japan. 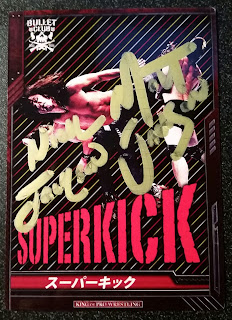 This card I bought from the Young Bucks, I couldn’t help myself as they are known for their Superkick’s and this is a Superkick card.  It is part of the same King of Pro-Wrestling card game in Japan released in 2014. 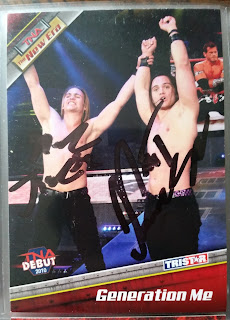