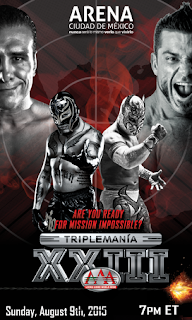 The American broadcast was marred with technical issues through-out the event.  The commentating team of Hugo Savinovich and Matt Striker didn’t seem to mesh well together and you could not hear Savinovich until the final two matches.  Striker did his best, but unfortunately it was not very good yelling and exaggerated “WOW” and “Nicely Done” instead of calling the maneuvers.  I realize he was the color man and not play by play, but knowing that Hugo could not be heard he should have switched rolls.

The show featured 6 matches with lots of pageantry and pomp and circumstance in between them.  Also it featured the Hall of Fame inductions of Perro Aguayo Jr. & Hector Garza, both posthumously.  This even also celebrated the retirement of wrestler Villano III and referee Pepe “Tropi” Casas.  They also celebrated the Blue Demon Jr’s 30th Anniversary in Lucha Libre.  All of these events featured what I can assume were wonderful video packages, plus the promo videos that built the matches shown prior to them were all in Spanish.  That is to be expected considering the event, however, with Hugo Savinovich’s microphone not working there was no one to translate what we were watching leaving all meaning gone to me.

Lucha Libre is a different style than wrestling in America and Japan and I knew that going in.  I haven’t watched a ton of AAA before, however, I have watched a lot of CMLL back when I had cable and it was broadcast on the Fox Sports en Espanol.  The trios matches were very similar to what we saw on WCW when they brought in the lucha libre cruiserweights.  At times there is a lot of tumbling and this can be done well where it looks good and it can be done horribly where is looks really bad, and that was what most of this evening gave us.

Another oddity was in AAA there do not use a ring bell, they blow a whistle to start the match and the finish is either a 3 count, which is extremely slow, or if a submission the referees wave their hands, once, in the “safe motion” and that signals the end of the match.  AAA uses a six sided ring.

Relevos Atomicos de Locura: Dinastia, Drago, Goya Kong, and Pimpinela Escarlata defeated Daga, Mamba, Mini Psycho Clown & Sext Star.
This match featured men, woman, cross dressers, a midget, and a transgender.  It was actually a decent match with the typical craziness that comes from a 8 person tag, but even more so considering those involved.  The finish came when Pimpinela Escarlata submitted Sexy Star. 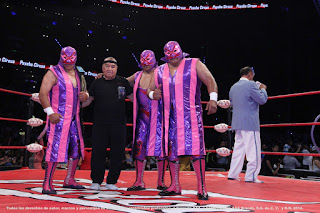 Los Villanos: Villano III, IV, & V defeated Los Psycho Circus: Monster Clown, Murder Clown, & Psycho Clown when Villano IV pinned Psycho Clown after a low blow.
Villano III & V had lost their masks in the past but were allowed to wear them one last time for this match but had to unmask immediately after the match.  This match rough to watch, the Villanos at 63, 53, & 50 years old and it showed.  There is family history between the two as the Villanos represent the Mendoza family and Psycho Clown the Alvarado family and this match started with a feud between Villano IV and Psycho Clown.

One of the oddest things I have ever seen in wrestling happened, near the end Psycho Clown was in the ring with a chair while Villano III stood there waiting for him to hit him, Psycho Clown started saluting him and it was explained that his beef was with Villano IV not III and that he respected III.  He did the same thing moments later when he would not complete the pinfall on Villano III breaking the count himself at 2 and more saluting. That’s when Villano IV kicked him in the junk and pinned him, to wish Villano III & V cried foul with IV dismissing them and heading to the back.

Villano III & V unmasked with the remaining men from both teams celebrating in the ring Villano III’s final match. This was also the final bout for referee Pepe “Tropi” Casa and he counted the pinfall.  During a post-match ceremony both Pepe and Villano III were awarded plaques.

Nine people is just too many people for this match.  Also the camera work with terrible, the first shot once the match started was to pull back to the corner of the arena where you could not make out what was happening in the ring.  Then we get this view from the top of the cage looking down into the ring at an odd angle so the moves don’t look quite right.  Because there were so many guys there was a lot of standing around also there were 6 rudos (bad guys) and 3 technicos (good guys).
This match didn’t flow, there were table spots and other high spots that made no sense.  I watched it twice on different days and my account is the same.  To win you had to pull down one of the three belts that were attached to what appeared to be a light rigging over the ring.  Los Hell Brothers retrained when Averno, who is clearly scared of heights, unattached a belt.

This matched featured a series of that Lucha Libre tumbling that I wrote about earlier that when done wrong looks bad, and this looked horrid.  I’ve never seen anything more obvious then when Blue Demon and Electroshock were in the ring with each other.   I understand wrestling is pre-determined, however I still like a bit of realism allowing me to suspend my disbelief.  That was impossible with this match up.
Blue Demon and La Parka picked up the win.

At this point in the production they finally fixed Hugo Savinovich’s audio and we could hear him for the final two matches.

This was a non-title hair vs hair match. From what I gather they had been feuding since Brian Cage entered AAA in February pinned Patron in a trios match.  Cage defeated Patron in a non-title match in April.  Then in June Patron defeated Cage by DQ in the title match and it ended with Cage draping the United States Flag on Patron’s unconscious body, which set up this non-title match that was about honor.

I had high hopes because Brian Cage is a fucking machine and Alberto can go in the ring as well.  It was the best match of the night so far, but not very good.  The seconds interfered in the match several times and the referee, who is Mexican, was apparently a bad guy and interfered on Cage’s behalf, refused to count a pin fall and other over the top evil referee shenanigans that don’t add to a match.

Eventually Patron took out the evil ref and another ref ran in to call the match via submission.  I feel AAA dropped the ball on this as it was the perfect opportunity for Pepe “Tropi” Casa to amble down to the ring for one more last bid of glory.  Cage could say that Casa was officially no longer a referee and he couldn’t have called the finish thus nullifying the match.

So Cage lost and had his head shaved.  After he charged Patron, ate a powerbomb and got the Mexican flag draped on him.  During the match Patron got busted open and they booth took several chair shots to the head.  Not metal folding, but those plastic folding ones.

The mat was very quiet through-out the event and you could only sporadically hear the wrestlers bumping in the ring.  When you see Cage get powerbombed and when he hits the canvas you hear no impact, it’s loses everything. 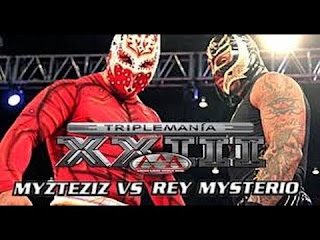 This was the best match on the show, I even liked it.  Rey reminded me of the Mysterio of old battling around the ring using tables and other devices.  Myzteziz was busted open under his mask but managed to get pretty coated in blood.  After a hard fought bout Mysterio picked up the win forcing Myzteziz to tap out to a fujiwara armbar.  I can’t recall ever seeing Mysterio win by submission.

After the match Mysterio went to the floor to celebrate with fans and the AAA President.  Averno, Pentagon Jr. and Joe Lider ran down and bear the tar out of Myzteziz.  Mysterio ran in for the save, took a beating himself but eventually they teamed up and sent the rudo’s packing.

Mysterio offered his hand to Myzteziz who spit mist in Mysterios face, turned heel and challenged Mysterio to a mask vs. mask match.  Konnan and his crew La Sociedad ran in and attacked Mysterio and the PPV abruptly ended.

All in all this event was very poorly executed.  I realize that you have to look at this as an event where feuds culminate and feuds begin and not knowing the history it can be confusing.  However, this was the same for NJPW’s Wrestle Kingdom 9 and they managed to execute an excellent night of matches.

If given the opportunity to watch this, I probably wouldn’t.