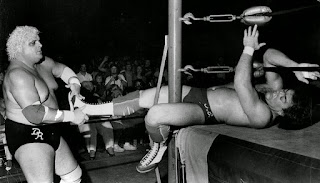 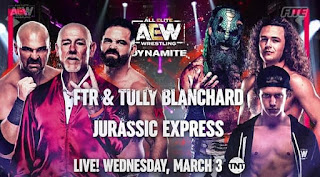 I checked out cagematch.net and found they have listed 256 matches between Tully Blanchard and Dusty Rhodes.  This includes singles matches and tag team matches, war games, and ect.  However I do happen to know that this is not correct.  I bought the Rise and Fall of CCW: Carolina Championship Wrestling from Highspots.  It's a 5 disc set about the promotion that ran in 2004 - 2005 and this set features three matches putting Tully Blanchard against Rhodes and cagematch only has one of the matches listed.  So I can bumped that match total up to 258 matches.

However if you add the five times that Blanchard wrestled the Midnight Rider, it brings their match total up to 263 matches.  Another thing to consider is that all but four of these matches took place between May 1984 and August 1988.

The first time they were in the ring together was on January 3, 1982 at the annual two ring battle royal in Houston Wrestling.  Their first singles match was May 24, 1984 on Mid-Atlantic Championship Wrestling in Greenville, South Carolina with Tully walking out with the win.  Their last match was on November 19, 2005 for CCW in Spartanburg, South Carolina where both men fought to a no contest for the vacant CCW Heavyweight Championship. 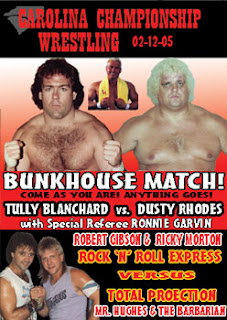 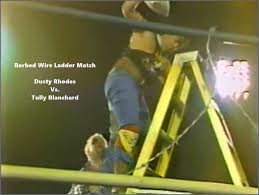 There are a couple very big moments that stand out between the two outside the ring.  On the December 28, 1985 edition of NWA World Wide Wrestling Blanchard fires Baby Doll slapping her in the face and Dusty makes the save for Baby Doll.

On the March 26, 1988 episode of NWA World Championship Wrestling Magnum TA had returned from his career ending car crash cutting a promo when Tully came out and laid out Magnum.  Dusty made the save and with a baseball bat wen to town on Blanchard finishing the segment choking him out with the bat.  It was pure violence. 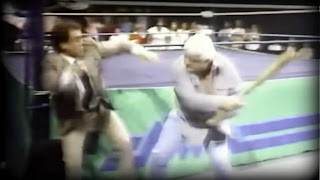