I recently discovered on Amazon Prime the film Below the Belt, a movie about a woman breaking into the wrestling business to escape what she perceives is a nothing existence.  Based on the novel To Smithereens by Rosalyn Drexler the movie was filmed in 1974 but was not released until 1980. 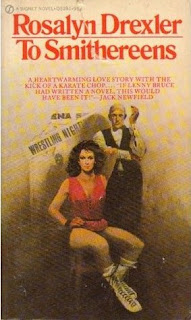 The lead actress Regina Baff plays Rosa Rubinsky, who we meet working the concession stand at the wrestling matches, when a patron gets fresh with her and she takes him down a promoter invites her to come train to be a lady wrestler.  Her first trainer in the film is none other than Mildred Burke playing herself and who held the Women's World Championship from 1937 to 1956.  In the movie Rosa would go onto portray the Mexican Spitfire on the wrestling circuit, which is the same name author Rosalyn Drexler wrestled under in the 1950's. 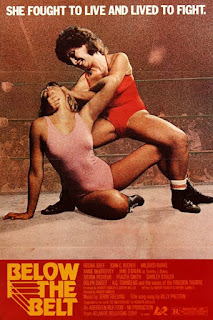 Regina Baff was born in New York and started her career on Broadway being nominated for a Tony Award in 1974 before transitioning to movies and television.  It appears that she performed the majority of her acting in the 1970's and just stopped once the 80's rolled around.   She appeared in films Road Movie, The Great Gatsby, Escape From Alcatraz and more.  She had guest spots on tv shows like Three's Company, Starsky & Hutch, and even Taxi.

Rosa starts out in New York City with her training and then takes a bus to Tampa, Florida to continue.  We see her travel around with other women and male wrestlers, however we never see the male wrestlers in the ring.  The only actor I recognize in the movie is James Gammon who plays wrestler Luke.  I know him better as Coach Lou Brown in the film Major League.

Through-out the movie they show clips of actual wrestling matches and from I can put together they filmed footage at a WWWF house show on November 23, 1974 at the Civic Center in Providence, Rhode Island.  They show clips of WWWF Heavyweight Champion: Bruno Sammartino vs. Killer Kowalski and Captain Lou Albano and The Valiant Brothers: Jimmy & Johnny defeating Tony Garea, Dean Ho, and a bloody Chief Jay Strongbow.  Also Jack Evans vs. Jose Gonzales, Tony Altimore vs. Hans Schroeder.

We also get footage of midget wrestling and lady wrestlers, but it appears as though those matches were filmed on a closed set and not in a big arena.  The only actual lady wrestler in the film, other than Burke, is Jane O'Brien who plays the champion and lead bad girl Terrible Tommy.

They show footage of a match between Jane O'Brien and Princess War Star who was also rained by Mildred Burke.  I can't find when the match took place but was before a decent sized audience.  War Star did a stretcher job and this was used to build towards a match between Rosa and Tommy in Birmingham, Alabama.

The film culminates with the big showdown between Terrible Tommy and The Mexican Spitfire Rosa Carlo which is Rosa's debut match.  Rosa is thrown on the floor and a fan throws a beer on her chest.  They have sort of a basic match.  Tommy beats up the referee to the delight of the crowd.  Rosa does a series of arm drags and gouges her eyes, twists her nose and bites her and chokes her.  Tommy makes her comeback and beats up Rosa real well.  Tommy goes for a splash off the top rope, Rosa moves, and Tommy hits the mat knocking herself out. 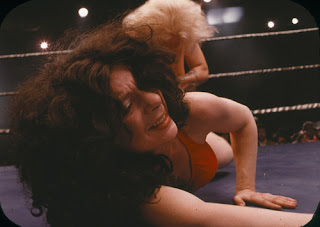 When the match started Rosa was booed heavily and Tommy cheered because she's from Birmingham.  By the end of the match the audience has nonsensically started booing Tommy and wildly cheering Rosa.

I wouldn't say this is a great movie by any means.  As a wrestling fan I was happy to check it out and I wouldn't mind reading the book it's based on.