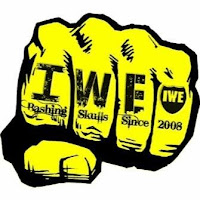 Canaan, Alex, & I were joined by Jonny for his first ever live wrestling event.  We stopped at the Fairfield House of Pizza and hung out with Mikey and Roy for about half an hour before going to the venue.

Decent crowd, probably 70 - 75 for the six match card that lasted just about two hours.  Phil was also at the show and we all sat with him.

Typically when the heel champion is getting it handed to him he walks out saying that he's had enough, in this case Levi was clearly in control when he walked out taking the count-out.  Didn't make sense.  Then a ladder was introduced and a return ladder match was booked for the Championship when they return to Fairfield. 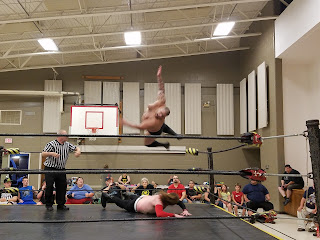 Really great match here, Ace chopped the hell out of Mayhem with the match spilling to the floor and up onto the stage where Mayhem took a nasty belly to belly onto the stage.  Ace picked up the win the Boss Man Slam.

I realize that Tony is 62 years old, but for some reason whenever reason when Bruce Springsteen's "Born In The USA"  kicks on he comes out I get nostalgic and mark out a little bit every time.  So this match was not the best.  JP botched a spot and almost fell through the ropes to the floor, it was comical.  After beating up JP for a while Plunkett the Ogre ran in causing the disqualification. 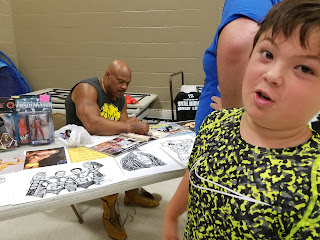 This was the match of the night!  Jordan is getting better and it was my first time seeing Nitro ever and Graca in person.  These three meshed well together, pulled off a very food entertaining match.  I'd like to see more of Nitro and Graca in Maine in the future.  Jordan got the cheap heel win pinning Nitro after Graca hit his finish.

Bryer and Roadblock won when the pinned Lane.  My first time seeing Harris, I like his gimmick and would enjoy seeing what else he can do.

I haven't been to an IWE show since Sept 18, 2015, (you can read the report on that show here) their shows in Fairfield have either been on nights I wasn't available to go or weren't very interesting.  If they continue to have shows like this I would make it a point to go.