NXT Takeover The End of the Beginning Review 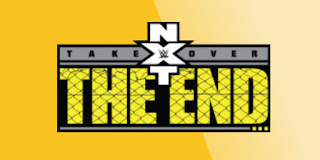 It's funny because I thought the sub-name was just The End and there was lots of speculation on the internet over exactly what that meant, then during the opening promo the whole sub-name The End of the Beginning appeared. 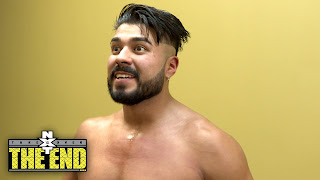 Andrade "Cien" Almas defeated. Tye Dillinger
I assumed that Dillinger was going to lose this match from the beginning because no one has ever been hyped up come in and lost their debut match.  I fear that Dillinger is going the ways of Tyler Breeze and Dolph Ziggler, a guy who is really good in the ring but is relegated to basically putting other people over with minor pushes here and there. 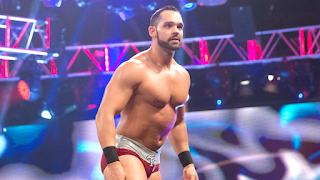 Cien look decent, I was expecting him to be masked, his finish looks devastating!  Personally I would have had this match be the second match on the card.  Cien was making his debut but he wasn't a known wrestler to the crowd and they weren't pumped for him.  Dillinger was wicked over with the Full Sail crowd.  The tag match should have opened the show. 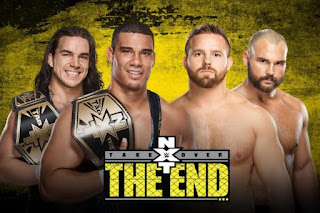 The Revival: Dash Wilder & Scott Dawson defeated Tag Team Champions: American Alpha: Jason Jordan & Chad Gable to win the titles.
I had Alpha winning this match and was surprised to see Revival become the first ever two time NXT Tag Team Champions.  This was was so freaking amazing though, it was somehow better than their Dallas match!  Legit the chemistry these two teams have is so good and they both put on a fine display of was Tag Team wrestling is all about and what it should be!  Both teams really bring me back to the height of JCP in the mid to late 80's.

Jason Jordan's dropkick is off the charts!  I mean seriously he almost kicked over Dawson's head.  I hope these two teams have a third match at Takeover Brooklyn. 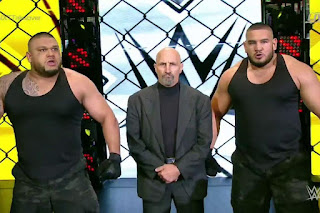 I was shocked to see Paul Ellering come out to represent the team that beat down Alpha post match.  I had to look them up, Gzim Selmani from Albania an MMA fighter with a 4 - 2 record & Sunny Dhinsa a Canadian freestyle amateur wrestler have no prior pro wrestling experience prior to signing with NXT.  They have wrestled a few house shows against American Alpha and others.  I'm very interested in where the relationship with Ellering comes in or why WWE brought him back. 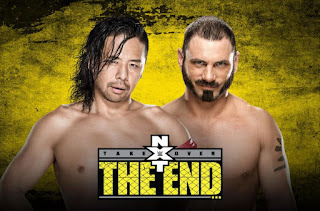 Shinsuke Nakamura defeated Austin Aries
A very stiff strong style match that had Nakamura on the defensive more in this match than any current TV match in NXT to date.  Austin attacked Nakamura with reckless abandon through-out the match and it cost him in the end has he crashed and burned into the guard rail and shortly after that it was over.  It'll be interesting to see where Aries goes from here.  Nakamura I think will be competing for the NXT Championship at Takeover Brooklyn. 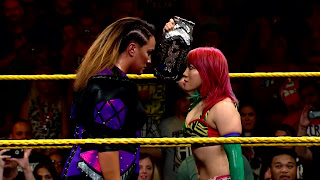 NXT Women's Champion: Asuka defeated Nia Jax
For those of you that don't know, Nia Jax is the Rock's cousin, I mean you did see her go for the "peoples" leg drop.
I really hate Nia's entrance music, it's rather dumb and between her and Dillinger it was the night of the high collar entrance gear.
I gotta say I liked this match and I didn't have high hopes for it.  It was a good story with Jax beating the tar out of Asuka the entire match using her size to her advantage countering everything Asuka had.  Asuka withstood the beating and when Jax was tuckered Asuka dished out a series of SEVERE strikes to Jax' head gaining the pin fall victory.

Earlier today we see Bobby Roode once again.  I look forward to his debut! 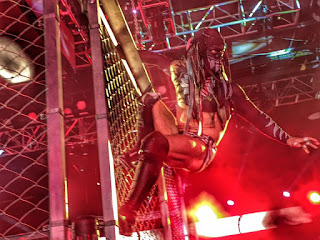 Steel Cage Match
NXT Champion: Samoa Joe defeated Finn Balor
I've maintained that a cage match with out blood just isn't a cage match I know I'm old school but that's how I feel.
It was a decent match, I didn't expect that a decisive of a finish with Joe getting the pin off a second rope muscle buster.  I expected a coup de gras off the top of the cage or at least an attempted one.  I thought the finish would be Balor doing his corner dropkick but it kicks Joe through the cage door and to the floor. 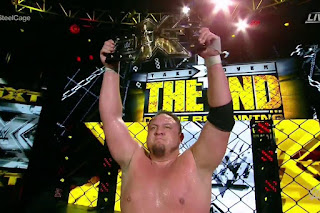 All in all it was a good show with some really good matches.  I've never been disappointed by a Takeover event, I'm sure Brooklyn is going to tear the house down.

Thanks for reading, please take a moment to leave a comment and check out my other posts and if so inclined like my blogs Facebook page.

Later Readers!
Posted by Michael J. Labbe at 4:34 AM