Women's wrestling has never been as popular as it is right now for the casual and mainstream fans.  Both on the independents and on the big stage of the WWE they have finally moved past the gimmicky bra & panties, mud bowl, evening gown, and lingerie matches for highly competitive matches that have been main eventing and at times stealing the show. 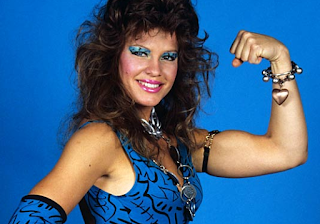 Trained by The Fabulous Moolahm, Richter debuted in 1979 eventually forming a tag team with Joyce Grable capturing the NWA Women's Tag Team Championship.  She is best known for ushering in the Rock n' Wrestling connection with Cyndi Lauper as her manager defeating the Fabulous Moolah for the WWE Women's Championship.  After leaving the WWE she would go on to win the AWA & WWC Women's Championships before quietly retiring from wrestling in mid 90's.  Richter made two appearances for Wrestle Reunion in 2005.  She was inducted in the WWE Hall of Fame in 2010. 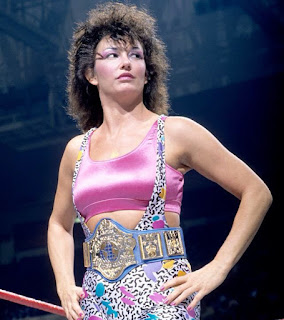 Sherri Martel has an illustrious in and out of the ring as a manager and wrestler.  Sherri began her training the with Fabulous Moolah in 1980 touring around the southern territories and Japan.  In 1985 she joined the AWA winning the Women's World Championship and managing "Playboy" Buddy Rose & "Pretty Boy" Doug Somers.  She arrived in the WWE in 1987 and defeated the Fabulous Moolah for the Women's Championship in her debut match holding the title for 15 months.  After the women's division was phased out Sherri managed Randy Savage, Shawn Michaels, and Ted Dibiase.  She has a brief run in ECW in 1993 - 1994 before going to WCW where she managed Ric Flair before becoming Sister Sherri managing the Harlem Heat.  She was inducted into the WWE Hall of Fame in 2006.  Sherri Martel passed away June 15, 2007. Madusa debuted in 1984 after being trained by Eddie Sharkey.  She started with the AWA in 1986 as a manager and wrestler winning the AWA Women's Championship December 27, 1987.  In 1989 she became the first gaijin to sign a contract with All Japan Women's Pro Wrestling.  Madusa signed with WCW in 1991 in a managerial role however did have a match with Paul E. Dangerously at Clash of the Champions XXI.  Changing her name to Alundra Blayze she spent two years in the WWE becoming the face of the Women's division winning the Championship three times.  Of course everyone knows about her throwing the belt in the trash can when she returned to Nitro in December of 1995.  At this time it appeared as though WCW was going to build a women's division around her much like WWE did, however they never did.  They established a Women's Championship with Akira Hokuto winning the belt in the tournament final at Starrcade 1996 by June of 1997 the title was vacated and then later the division was dissolved.  Madusa would eventually win a title in WCW the Cruiserweight Championship from Evan Karagias at Starrcade 1999 losing it to Oklahoma 28 days later at Souled Out.  Madusa retired from wrestling in 2001.  She was inducted into the WWE Hall of Fame in 2015.  In September 2015 she was made the comissioner of World Wonder Ring Stardom in Japan.  Since 1999 she has driven the monster truck Madusa on the USHRA circuit. 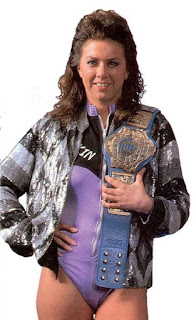 Rockin' Robin is a second generation wrestler, the daughter of Grizzly Smith and the sister of Jake "The Snake" Roberts and Sam Houston.  She was trained by Nelson Royal debuting in 1987 in the WWE she was a member of the Fabulous Moolah's team at the first Survivor Series.  On October 7, 1988 in Paris, France Robin defeated Sherri Martel for the Women's Championship.  She held the title until February 21, 1990 when it was deactivated.  The only major defense of record was at the 1989 Royal Rumble against Judy Martin. After leaving the WWE she worked the independent scene and toured All Japan Women's Pro Wrestling.  She won the UWF Women's Championship at Beach Brawl from Candi Devine on June 9, 1991.

Later Readers!
Posted by Michael J. Labbe at 3:42 AM