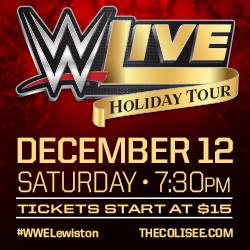 On December 12, 2015 Paul, Alex, Addison, Canaan, and I went to The Colisee in Lewiston for a WWE house show.  Roy and Mikey also attended and we sat next to Canaan’s friend Nolan and his family.  We got there about 615pm and the line was all the way down the parking lot.  We were in the building just after 7pm.  While standing in line Mikey, Roy, & Paul met up with us.

Straight away I was annoyed though, as after waiting in line that long you get up to the building and they won’t let people bring bags of any kind into the building.  So I truck back to the van while the kids go in with Paul and Alex.  I drop the bag off and carry my camera back, I get all the way up there and they say you can’t bring your camera in.  This is ridiculous as the WWE has always let people take photos.  So I challenge them and ask to see the list of banned items.  The happily and eagerly produced it and it didn’t say cameras.  It said no video cameras and no recording devices but nothing about cameras.  They said it says camera’s in general, and pointed out that it was very specific as to what type of camera you couldn’t bring in. 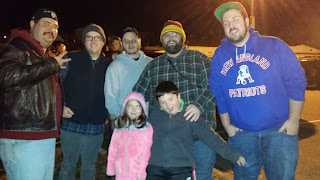 Regardless I had to bring my camera back to the van and along the way Paul calls to say that they set the merchandise table up in front of our seats and moved us to the floor which just angered me even more.  I finally get into the building and find they moved us to the floor in what would be the eight row.  Now I bought the tickets I did for two reason, the price and the fact that we would be elevated off the floor in the front row so no one would be in front of us and if people were standing they wouldn’t block the kids view.

I’ve sat on the floor and I don’t like it for the same reason, you always have some jerk that has to stand up the entire time blocking your view.  As it turned out the seats were quite good because we didn’t have anyone like that plus the empty seats were placed in such a way that we had an unobstructed view 90% of the time.

They have an automated announcement they always plays saying what you can and can’t do during the event, record the show, jump in the ring, throw stuff at the ring, and what not.  One of the announcements was them stating photography was allowed.  Which of course they want you to share your photos on social media.  Phil was very upset has he has been going to WWE for 30 years and has always brought his camera and taken photos.

Moving on to the matches, it was a really good night of matches.  One of the best WWE House Shows I have ever been to.

Triple Threat: Tag Team Champions: New Day: Big E Langston & Kofi Kingston defeated Lucha Dragons: Calisto & Sin Cara and Usos: Jimmy & Jey when Kofi pinned Cara with a roll up.
Big E just looks so awkward gyrating all around and in person he is just huge!  The kids loved the Lucha Dragons because of their masks.  Good competitive match where Kofi got the backdoor roll up for the win.

R-Truth defeated Tyler Breeze w/ Summer Rae
This was a short match with Truth getting the surprise win on a reverse roll up for an out of nowhere pin.  I was surprised that they had Truth win if there were building Breeze.

Goldust pinned Bo Dallas w/ final cut
I was quite excited to see Goldust on the card, I’m a big fan of Dustin Runnells/Goldust for years.  Goldust has been wrestling for so long he had that link back to the better years of WCW so it’s also a nostalgia things as well.  Also with him wrestling Mike Rotundo’s son, that was pretty cool to me.   It was good match with Goldust being dominate then hitting the final cut for the win.  Bo had some great heat. 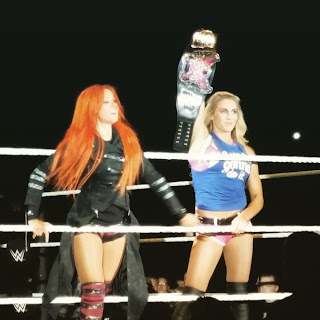 Diva’s Champion: Charlotte & Becky Lynch defeated Team B.A.D.: Sasha Banks & Naomi w/ Tamina when Charlotte submitted Sasha w/ figure eight leg lock
Addison’s favorite match by far!   I was surprised the got Charlotte and Becky, I figured it would be Team Bella, I’m glad it wasn’t.  These woman are so good in the ring, I don’t think the match was long enough.  Charlotte’s finish is so impressive to see in person, the way she arches up so high.

Dean Ambrose pinned Intercontinental Champion: Kevin Owens in a non-title match
Owens is a fantastic heel that the WWE so desperately needs, it’s the little things that he does that makes him extra despicable.  Like when he took the microphone from Eden to run the crowd down but has to stop and remove a hair and toss it back at Eden.   Great match between these two, but I didn’t expect anything less from them.  They are both work horses.  Match was one of the longer matches of the nights, was quite surprised to see Ambrose go over clean in the center of the ring after hitting his finish.

United States Champion: Alberto Del Rio pinned Jack Swagger
I wasn’t expecting much out of this match but one gain Del Rio blew away my expectations, much like he did at NEW in August.  Swagger was pretty over with the crowd.  This was a 20 minute match and about ¾ of the way through I was thinking that it was a great match and they these two have wrestled each other a lot before.  That’s when Paul brought up how at first he didn’t care about this match because he’d seen them wrestle so many times before but that he thought it was really good.

The Dudley Boys: Bubba Ray & Devon and Ryback defeated The Wyatt Family: Luke Harper, Eric Rowan, & Braun Strowman when Ryback pinned Harper after shell shocked
Short match, about 6 minutes.  Strowman is still pretty green and you can so it as his timing was off a bit. Ryback got one of the biggest pops of the night.  A flurry of activity with all 6 in the ring cleared out to the legal players and a shell shocked later the good guys win.   Of course the Dudley’s hit the 3D and the what’s up headbutt to make the fans happy.

Roman Reigns defeated World Heavyweight Champion: Sheamus by disqualification after Sheamus threw a chair at Reigns striking him in the head.
I wasn’t expecting a lot and they destroyed me expectations.  The longest match on the card at nearly 25 minutes with both men going all out with several false finishes before Sheamus got himself DQ’d.  This was a really, really good match with both giving it their all.  This is the best I've seen from Reigns, if he brought this on TV he'd get over better.  Lots of false finishes and a DQ finish that actually made sense as apposed to just a run in.  Sheamus the chicken shit heel champion felt his championship was at risk so he threw a chair at his opponent.

Again this was one of the best WWE House Shows I have ever been to.  Addison held up great through intermission but after she slowly started to fade and eventually fell asleep at the beginning of the Main Event and slept through to the end at a time when the crowd was the loudest.  Canaan had a blast, honestly it's the most fun I've ever seen him have a WWE show and I think it was all because he buddy Nolan was there. 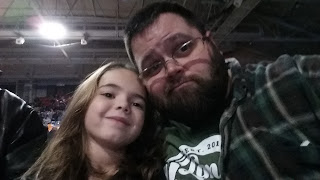 I tried taking some photos with my phone but they just didn't come out. I got the one good one above but otherwise they were all soft or blurred.

Phil messaged my this morning that he was so angry that he contacted WWE about it.  I doubt anything will come of it but I think it's important to express your opinion.