Limitless Wrestling returned to the Central Maine area with Leave No Doubt at the Morgan Hill Event Center in Herman, Maine! 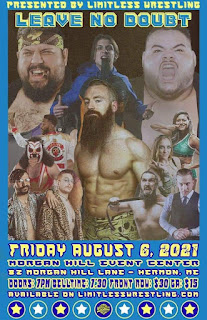 It was nice going to another Limitless show just 6 days later.  Mikey road up with me and we met up with Roy at Dysarts where we all had brinner!  Breakfast for dinner is fantastic!  The Morgan Hill Event Center is gorgeous!  The merch area was it's own room away from the room that the ring was set up in.  Pretty neat looking, and they have a cool ass balcony that I totally plan on sitting on next time.
Ashley Vox vs. "Legit" Leyla Hirsch 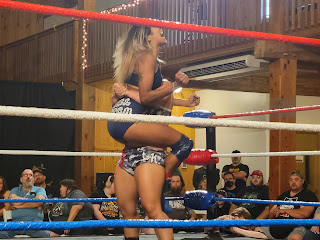 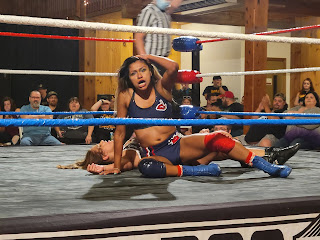 This was the first ever match up between these two, and also they are a couple.  Great back and forth matchwith Vox getting the pin picking up the victory!
Alexander Lee vs. Slade 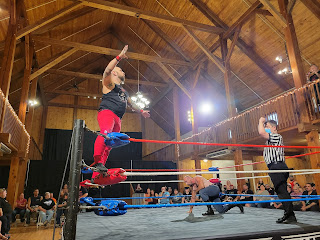 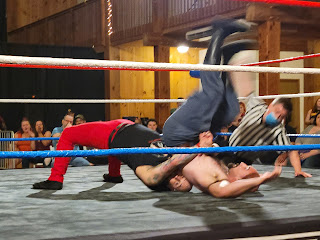 Slade jumped Lee outside the ring before the bell.  The battled around for a few minutes before getting in the ring for the match to officially start.  They didn't stay in the ring very long but it was not a street fight it was a standard wrestling match.  Lee won the match pinning Slade, but it can be said that the war is far from over.
Prestigious: RBG, Channing Thomas, & "Main Attraction" MacDaniels defeated The Mane Event: Jay Lyon & Midas Black and Nolo Kitano
Great trios tag team match.  These really makes me want king of trios to comeback somehow somewhere!  This is my first time seeing Nolo Kitano, he's good.  IT was clear that Nolo and the Mane Event have teamed before or they just have natural chemistry. Prestigious came out on top when they hit their finish, the avalanche doomsday device and BRG pinned Kitano.
VSK vs. Nico Silva 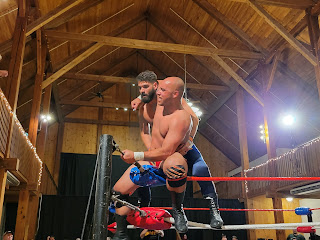 This was an unadvertised match, and it was great to see both of them on the card.  I chatted a lot with VSK at the merch table before and after the show and during intermission, really nice guy.  This was a very good match with a clever finish.  VSK untied Silva's boot and as Silva was tying his boot VSK kicked him in the head and then got the pin with an inverted piledriver.
"Alternative" Anthony Greene vs. Matt Cross 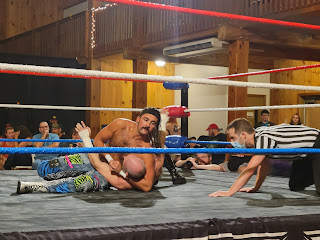 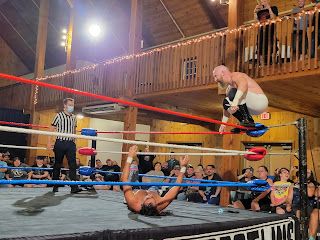 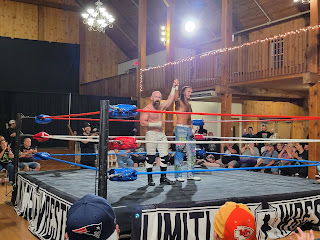 Awesome match!  The crowd was exited that AG was back, and also very excited to see Cross.  Great back and forth match with lots of action and great offence from both men.  AG got the pin with his So Much Prettier finish.
Ava Everett vs. Masha Slamovich 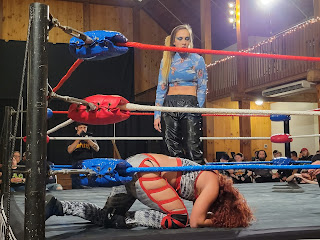 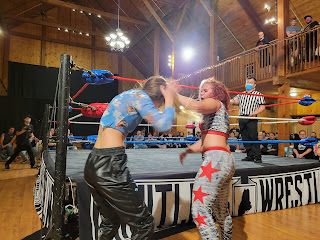 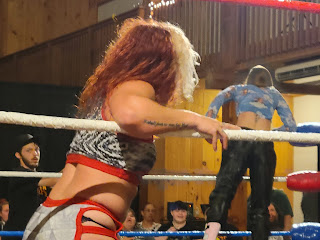 This was a very stiff and hard hitting match.  Ava hit Masha with a foreign object and then got the pin, she placed it under her arm to hide it from the referee, however when the ref raised her arm in victory it fell out.  The match was restarted and Slamovich DESTROYED Ava with spinkick and piledriver for the pin and the win.
The Competition: Champ Mathews & Connor Murphy with Alex Cypher vs. Waves & Curls: Jaylen Brandyn & Traevon Jordan 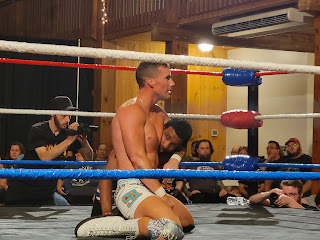 Good tag team match.  Jaylen took the beating for his team the majority of the match.  The Competition work him over, cutting him off every time you thought he was going to get the tag.  When he did the place popped big and Jordan cleaned house.  In the end though, the Competition was too much for the younger tag team and Mathews pinned Brandyn with a handful of tights.
Rip Byson vs. Charles Mason 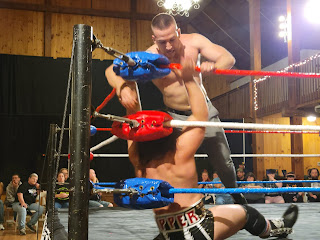 I'm a big fan of the Ripper and after the beating he took last weekend I was surprised to see him back in the ring going all out.  Well I guess I shouldn't have been.  Hard hitting match with Rip getting the pin after a Stampede Driver.  I'd like to see these two tie it up again.
Last Man Standing: Ace Romero vs. Eric Johnson
This feud was really built at the Dojo shows.  Eric Johnson was a 20 plus match winning streak and if he won tonight he would get a a Limitless Wrestling World Championship match.  Well, he lost, but I think he deserves a title shot. 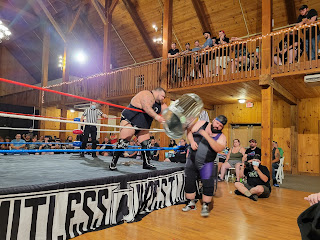 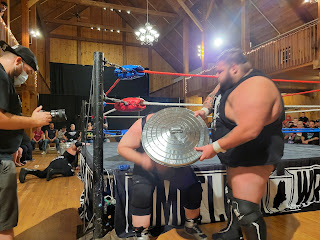 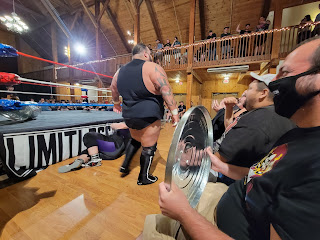 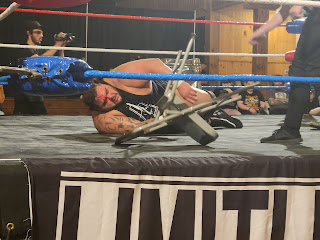 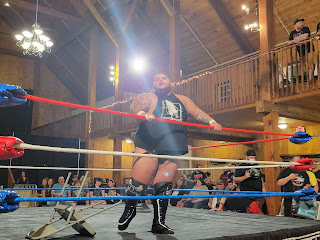 This match was in the ring and all over the floor, They used chairs, a door, a plastic bat with thumbtacks on it, and a trash can and can lid.  At one point in the floor Ace picked up the trash can lid and gave it to Mikey to hold.  I figured Ace was going to ram Eric's head into it while Mikey held it, but he told Mikey to hit Eric, and Mikey did and it was loud!  The crowd popped and chanted one more time, Ace handed me the lid and told me to "fucking kill him" so I did.  I knew it had to be at least equal in sound to Mikey's and I think I accomplished that.  Ace then told me to hit him, as in Ace with it, so I shrugged my shoulders and I hit Ace, another great loud sound.  It was fun.
Dave Dyer got involved in the match, but in the end Ace for the pin ending the streak and taking away Johnson's title match.
It was a great night of wrestling!  Then again any night I can go to wrestling is a great night of wrestling!!!
Limitless is back on August 28th with the 2021 Vacationland Cup!
Thank you for reading, please leave a comment, check out my other posts, and if you want like my blogs Facebook page.  You can also head over to Amazon and pick up a copy of my new book Limitless Wrestling: The First Five Years, or any of my other books as well.z
Until next time!!
Posted by Michael J. Labbe at 10:29 PM