History will be made on April 25, 2021 at the Impact Wrestling's Rebellion PPV when two major North American Wrestling companies World Championships will be defended in a title vs title match live from Nashville, Tennessee. 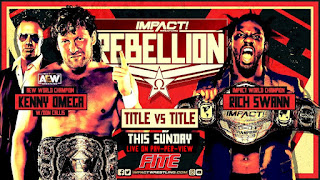 At Rebellion AEW World Heavyweight Champion: Kenny Omega will challenge Impact Wrestling World Champion: Rich Swan.  The storyline began in February when Impact Executive Vice President Don Callis aided Kenny Omega in winning the AEW World Championship from Jon Moxley.  On the next episode of Impact Omega made an interview appearance with Tony Khan making the first of many paid appearances on the show promoting AEW Dynamite.
Other wrestlers would appear on Impact however the only Impact wrestlers to make regular appearances on Dynamite have been Don Callis and the Good Brothers: Doc Gallows & Karl Anderson.
At Bound for Glory on October 24, 2020 Rich Swan defeated Impact World Champion: Eric Young to win the title.  I was shocked as I didn't then and I don't know view Rich Swann as a viable and believable World Heavyweight Champion.  In April 2020 Moose declared himself the TNA World Champion and began wearing the title to ring for his matches.  On February 23, 2021 Scott D'Amore officially recognized the title as a separate World Championship within the promotion and announced a title unification match with Swann at the Impact Sacrifice PPV that saw Swann walk away with the titles.
In a match that has been heavily advertised on Impact and hardly mentioned on AEW we will see two World Championship from different companies do battle.  Most likely the finish of the match will not see one man walk away with all the titles, I foresee a draw or disqualification finish.  Another interesting addition to the match will see Mauro Ranollo calling this historic match. 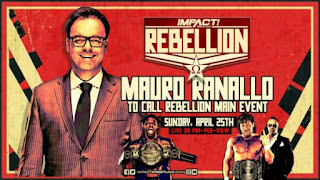 This will be the first time in 13 years a match like this will take place in North America, prior to that was in 1991.  I'm talking two separate wrestling companies, not when WWE owned WCW and unified the championships.  This type of match is much more common in Japan than on this side of the world.  Many will recall the April 18, 2000 edition of Smackdown when the then WWE World Champion: Triple H battled the ECW World Champion: Taz in a non-title match with Triple H getting the pin in just under 6 minutes when Tommy Dreamer's run in backfired costing Taz the match.
Let's take a look at some other title vs. title matches: 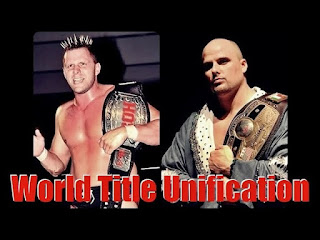 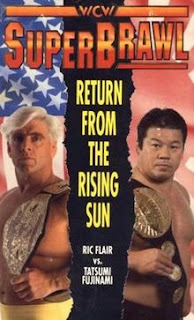 May 19, 1991
WCW SuperBrawl Bayfront Arena, St. Petersburg, Florida
WCW World Champion: "Nature Boy" Ric Flair defeated NWA World Champion: Tatsumi Fujinami
to capture the NWA Worlds Championship, Fujinami was also the IWGP Champion, however that title was not on the line.
This match has a complicated story.  On January 11, 1991 at a house show in East Rutherford,  New Jersey Flair defeated Sting to capture the NWA Worlds Championship, it was with this title win that WCW began recognizing Flair as the WCW & NWA World Champion, however there was no separate title belt used to recognize the WCW Championship it was in namesake only.  In Flair's official 16 World Title reigns this WCW title run is not recognized by the WWE. On March 21, 1991 in Tokyo Japan Flair last a match to Tatsumi Fujinami and in Japan was recognized as winning the NWA World's Championship, but not the WCW title.  At this match at Super Brawl Flair defeated Fujinami and "recaptured" The NWA title.  These title changes are have been recognized by some and not recognized by others.  I included this because at this time the NWA was technically a separate governing body from World Championship Wrestling. 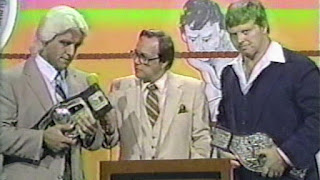 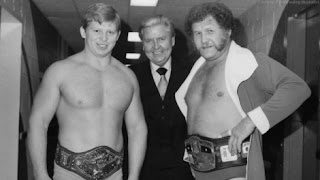 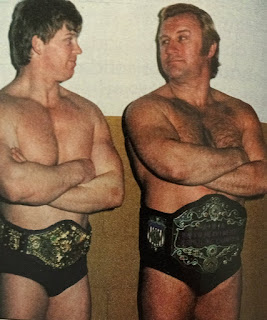 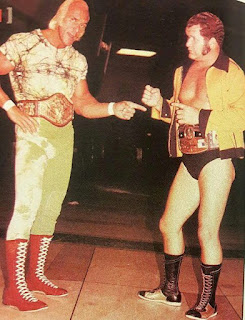 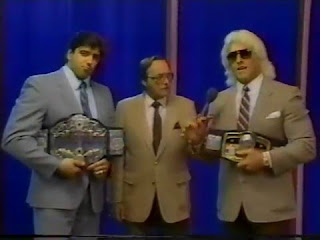 Thanks for reading, please leave a comment, read my other posts, and like my blogs Facebook page, check out my weekly podcast The Wrestling Insomniac on the Nerdy Legion Podcast Network and while your at it pick up my book over at Amazon in Kindle or Paperback.
Until next time!!
Posted by Michael J. Labbe at 3:32 PM