More through the mail success to share with all of you. 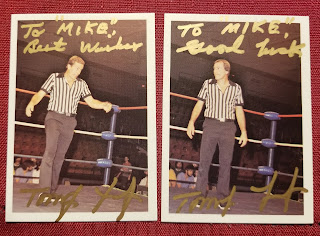 Hands down the greatest referee of all time.  These cards are both from the 1988 NWA Wonderama card set.  I actually had both of these cards signed by Mr. Young, however he had signed them on the back of the cards.  I'm not a fan of cards signed on the back.  So I mailed him these cards again with a gold sharpie asking him to sign the from.  I've VERY pleased with how these turned out. 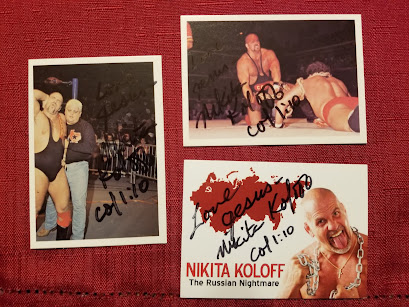 "The Russian Nightmare" Nikita Koloff
Two of the cards of from the 1988 NWA Wonderama card set and the third card is a custom card that he included.  Nikita is one of the all time greats even though his career wasn't very long at nine years. 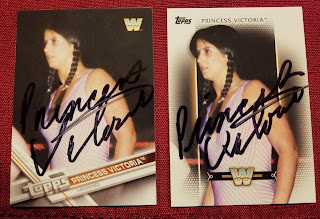 Trained by Sandy Barr and The Fabulous Moolah, Princess Victoria debuted in 1980 in NWA Pacific Northwest.  Over her career she wrestled all over the NWA Territories as well as the AWA and WWF.  Her final match came after a career ending neck injury in the WWF on September 1, 1984 where she and Velvet McIntyre defended their Women's Tag Team Championship against Despina Montagas & Leilani Kai. 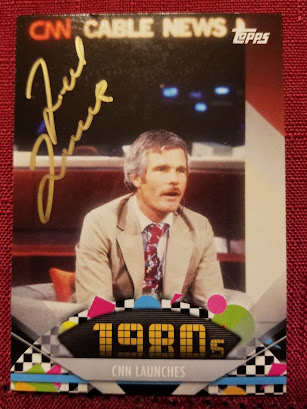 Ted Turner
Ted Turner doesn't get enough credit for all he did for professional wrestling.  It aired on his TBS Superstation network long before he bought Jim Crockett Promotions, which was in financial peril.  He's responsible for starting the Monday Night Wars when he launched Nitro opposite Monday Night Raw.
This card is from the 2011 Topps American Pie card set.  You'd think they could have found a better picture.