The Final Matches of Randy Savage

In the days leading up WrestleKingdom I found myself with a few days off and I decided to check out some prior January 4th shows at the Tokyo Dome.  I found some great matches and at times unexpected wrestles.  One of those was on January 4, 2000, then called Wrestling World, where "Macho Man" Randy Savage wrestled Rick Steiner.

Two things immediately came to mind when I saw this; I don't think I've ever seen them wrestle before and I don't remember Macho Man wrestling in the year 2000, I thought he had left WCW by then.  That was 20 years ago though, so why would I even remember this.

Using my normal sources Cage Match and The History of WWE plus a few other places I was surprised what I discovered about the Macho Man's finals days in the ring.

His last match in 1999 was on August 14th at the Road Wild PPV when he defeated Dennis Rodman in a hardcore match.  On October 25th he appeared on Nitro in Phoenix, Arizona cutting a promo on Vince Russo and the new blood, saying what they did to Hogan and Flair they could never do to him because he wasn't a punk bitch.  Talk about being a world champion in WWF & WCW and that he was looking to pass the torch to someone.  Savage was 47 years old at this point.

His next wrestling appearance came at that January 4th Tokyo Dome show for New Japan, his first appearance in New Japan since 1996.  In this match with Rick Steiner Savage was filling in for an injured Goldberg.

His next match was also filling in for an injured Goldberg, this time against Sid Vicious at a WCW House show on January 14, 2000 in Charleston, West Virginia and was pinned by Sid after a powerbomb.  This would end up being the final singles match of Savages career.

His next WCW TV appearance was on the May 2, 2000 episode of Thunder from this historic Mid-South Coliseum in Memphis, Tennessee.  During the main event number 1 contender Battle Royal Savage made a surprise appearance 20 minutes into the 23 minute match that Ric Flair would go on to win.  This was also Randy's final WCW appearance.

We wouldn't see the Macho Man in a wrestling ring again until late 2004 in TNA.  Well technically he did appear in a wrestling ring on the season 1 episode 14 of Nikki a wrestling situational comedy where he played James "Pretty Boy" Carter and as Bonesaw McGraw in 2002 for Sam Raimi's Spider-Man.  He looked awesome in both.

On November 7, 2004 TNA presented Victory Road their first ever 3 hour monthly PPV.  At the conclusion of the main event Savage made a surprise appearance confronting NWA World Champion Jeff Jarrett.

I wouldn't say Savage looked bad in the match but he wasn't the Savage of old.  He'd lost a lot of muscle mass and even covered himself wearing a long sleeve shirt and loose pants.  Earlier in the evening Savage was attack in the back and stuffed in the trunk of a car that sped away after.  With a three on 2 advantage Jarrett, Nash, & Hall got the best of Hardy and Styles for over 15 minutes before Savage walked to the ring. 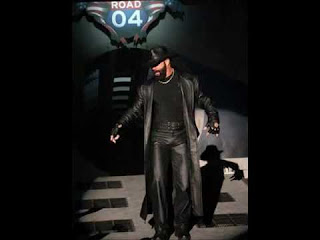 Tagging himself in he went to work with punches on Jarrett, then Hall & Nash.  There was a three way sleeper hold but Jarrett got out of his.  Jarrett then attempted a sunset flip but Savage punched him in the face and then sat down on his hooking the leg for the three count pinning the NWA World Champion.

I've read that this was supposed to lead to Savage defeating Jarrett for the championship at the January Final Resolution PPV and losing it back to Jarrett at the February Against All Odd PPV.  Image Randy Savages name in the history books as a former NWA World Champion.  He and Flair would then be the only ones to hold the WWF, NWA, & WCW World Championships. 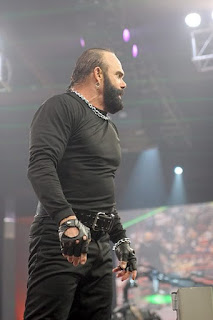 It's odd to me that Savage didn't wrestle during that time between WCW & TNA.  Perhaps he had one of those Time Warner contracts that prevented him.  I always think it's sad when a wrestler, especially the one the caliber or Randy Savage, doesn't get the big send off that I feel they deserve.

It's nice that he was inducted into the WWE Hall of Fame in 2015, but it would have been better if he could have been there himself to accept it.