Limitless Wrestling kicked off their 2020 season in a big way Friday January 24th in Yarmouth, Maine with Flirtin' With Disaster! 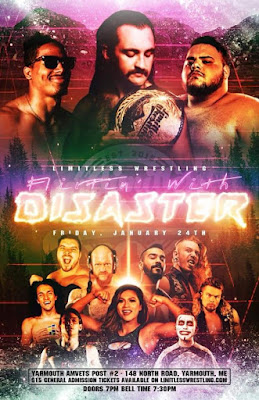 Roy meet me at my house and we drove down together.  We met Mikey and Carolyn at the show

From the moment the name of this show was announced it reminded me of the Molly Hatchet song of the same name.  Every time I saw a new post or notification of the show the song popped into my head.  If Randy didn't open the show with this blaring over the speakers it would be a crime.  Well the didn't start with a recording of the song, it started with Ryan Curry rocking it out on the guitar and Rich Palladino belted and awesome rendition of the track!  What a way to start the show!

This show was amazingly fun with so many surprises through-out the night.  The crowd was amazing and the place was sold out, even the standing room only.  I heard they had to turn away about 40 people at the door.  Stinks for them, but good news for Limitless, people shouldn't hesitate to grab a ticket when they can.

I didn't get many pictures because my phone had low battery.

The second generation star making his Maine and Limitless debut and he couldn't have drawn a tougher card than the blue collar bad ass and fan favorite James Drake.  I personally am a huge fan of Drake, he is a guy that would have thrived back in the day with the likes of Hansen, Brody, Murdoch, and others of similar ilk.

To say this match was hard hitting would be an understatement to say the least.  These two beat the tar out of each other with Pillman taking the brunt of the punishment.  Including a wicked foreman right into Pillman's mush.

Junior busted out a couple his his dad's signature moves including the springboard clothesline and cross body block off the second rope.  Drake hit the vader bomb and his always impressive moonsault.  Drake walked away with the win.

After the show I spoke with Pillman and he stated that this was the first time that they had ever wrestled and they had never touched before in the ring.  That adds so much to the match and I can't want to watch it back on IWTV.

"The Prize" Alec Price vs. Danhausen

Price has got some heat with the audience and Danhausen is beloved.  This was a good match, the crowd was into it which always helps.  Danhausen worked in his no swearing, tequila, and teeth spots.  In the end though a low blow while the referee was picking up teeth and that step up kick the back of the head that Price uses for a finish gave him his first win the Limitless Wrestling.

Legit Price is a face of the future not just in Limitless or New England, but in the world of professional wrestling.

Garcia getting that big time heat from the moment he entered the ring.  At first he seemed to be the reluctant heel but by the end of the match he was embracing the hate.  I'm still not overly impressed with Oswald, we saw a lot more of what he could do in this match than the last but that still wasn't  a lot.

Project spent the majority of the match getting ass handed to him while be begged off not wanting the fight, then when he decided to fight he busted out some interesting offense.  In the end Garcia locked in the sharpshooter and leaned back far enough that he even hooked Project around the head getting the submission win with a nasty move.

Post match Garcia got on the mic and said that this is what happens when someone who gets in the ring isn't prepared the fight.  That he wanted real competition and issued and open challenge that lead to....

Kris Statlander with the unadvertised surprise appearance.  I thought for sure after November's Last Creature Standing match and with her signing with AEW we had seen the last of our favorite alien.

This was an excellent match!  Statlander is one of the best wrestlers of any gender in wrestling today.  I don't care who she is wrestling Statlander gets a good match out of them.  Not that she needed to work that hard with Garcia who is excellent as well. 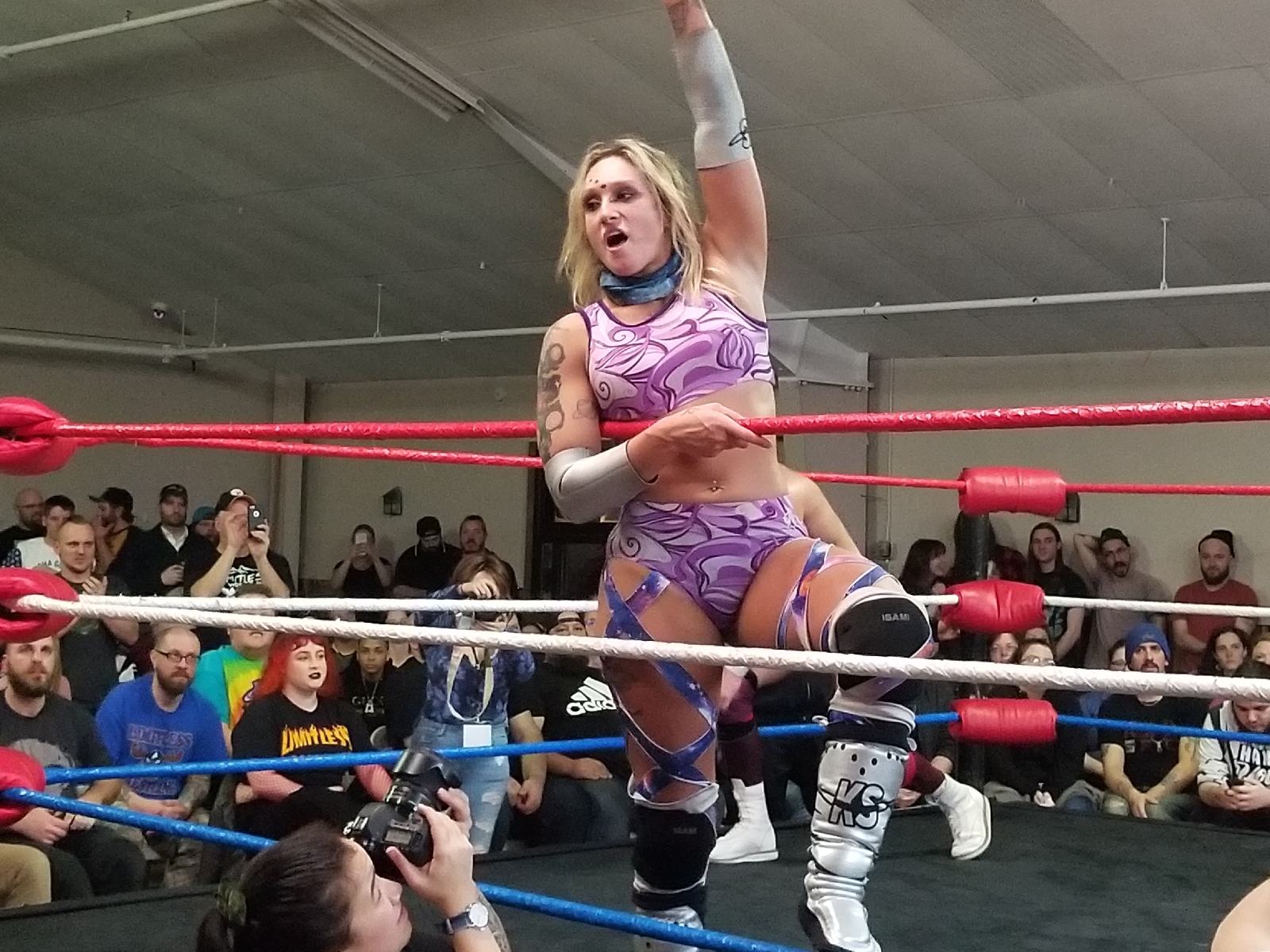 Near the end Stat was going for big bang theory when Garcia reversed it into a roll up and the two rolled back and forth exchanging a couple dozen two counts.  In the end though Kris Stat picked up the win.  Post match Garcia attacked Statlander until Ashley Vox made the save.

This was a good match.  My first time seeing Tasha Steelz live.  Vox worked her fish hook finish through-out the match going back to it several times until finally getting it sunk in good and getting the submission victory. 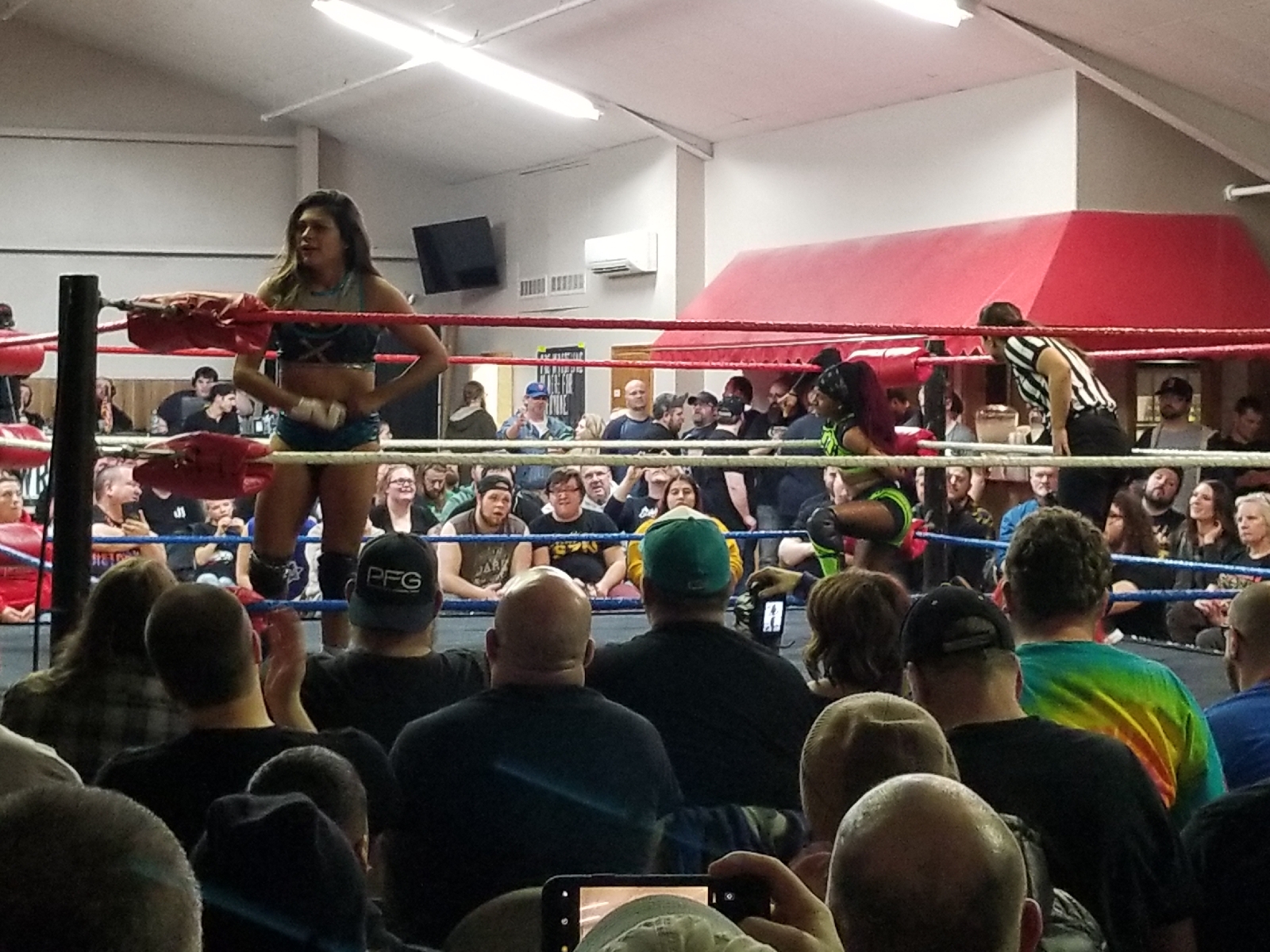 This was announced as a non-title match as The North are the Impact Wrestling World Tag Team Champions.  Mikey and I attempted to start a Monster Mafia chant, but were not successful.  I like that name much better than The North.  This was Alexander's first time in Maine whereas Page has been here a bunch.

As one would expect that was a tremendous match!  Posse continues to get better and with teams like The North coming in to work with them they will continue to get better.  Page and Alexander brought their A game tonight but it wasn't enough as Aggro stole a cradle pin from Alexander giving MSP the upset victory.

In April Limitless is presenting the Prom and an eight team tag team tournament.  I would love for Monster Mafia to come back for this event.

This was the first match back from intermission and they did a fantastic job bringing the crowd back up from the extended break.  They tried to stick to 15 minutes but Pillman and Statlander had long lines and I can understand the extension.

Alexander Lee came out to Ted Nugent's Stranglehold which is what Kevin Von Erich used back in his World Class days.  I'm probably the only one that noticed though.  Even though she didn't win Jody Threat shined in this match including a blue thunder bomb on Josh Briggs.

Near the end of the match Brandon Kirk walked to the ring surprising Joey Eastman who ran.  He then skewered the head of Lee and then piledrove him on the ring apron taking him out of the match.  He then chased Eastman to the back.  Briggs got the win pinning Blackwood. 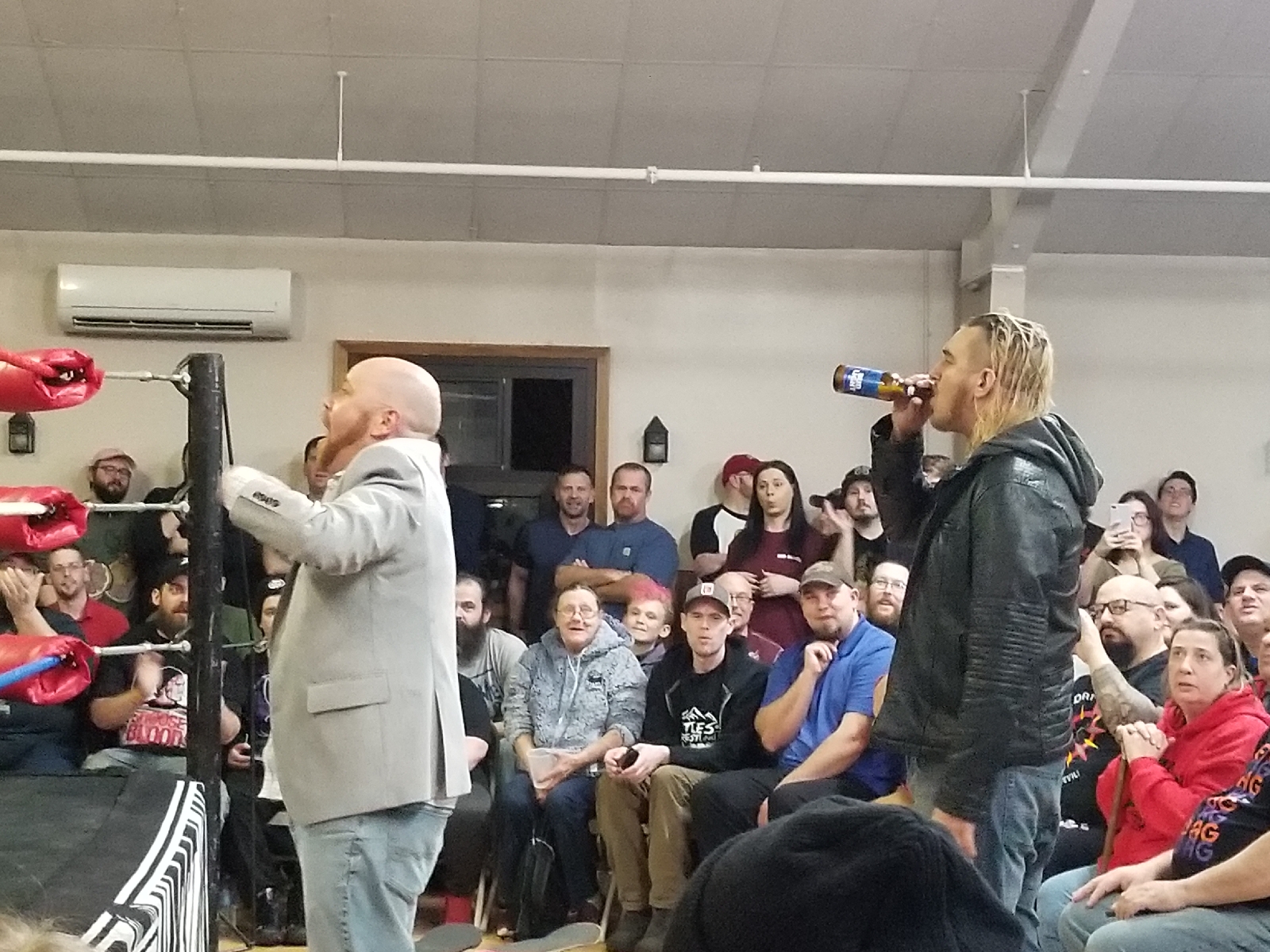 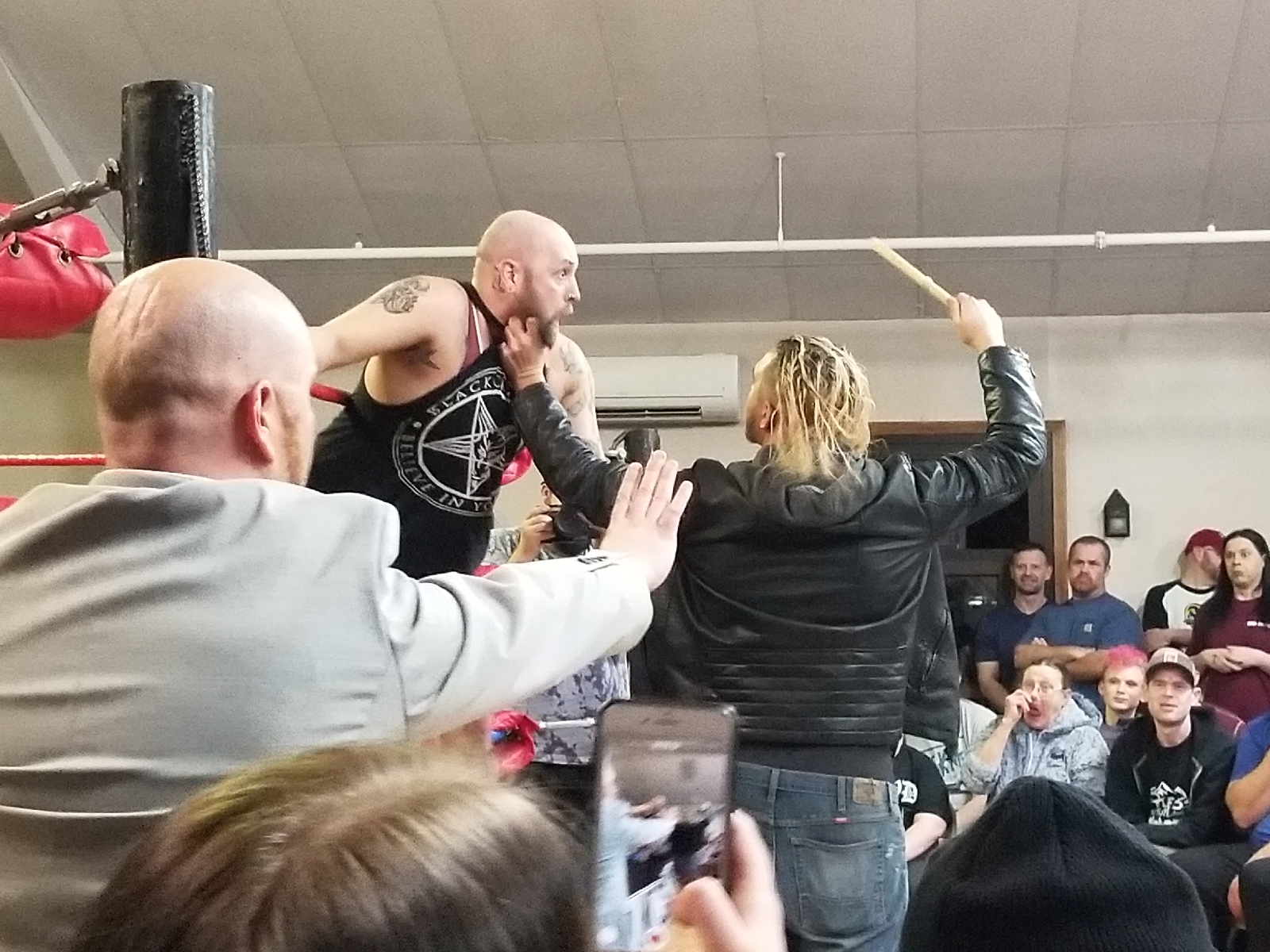 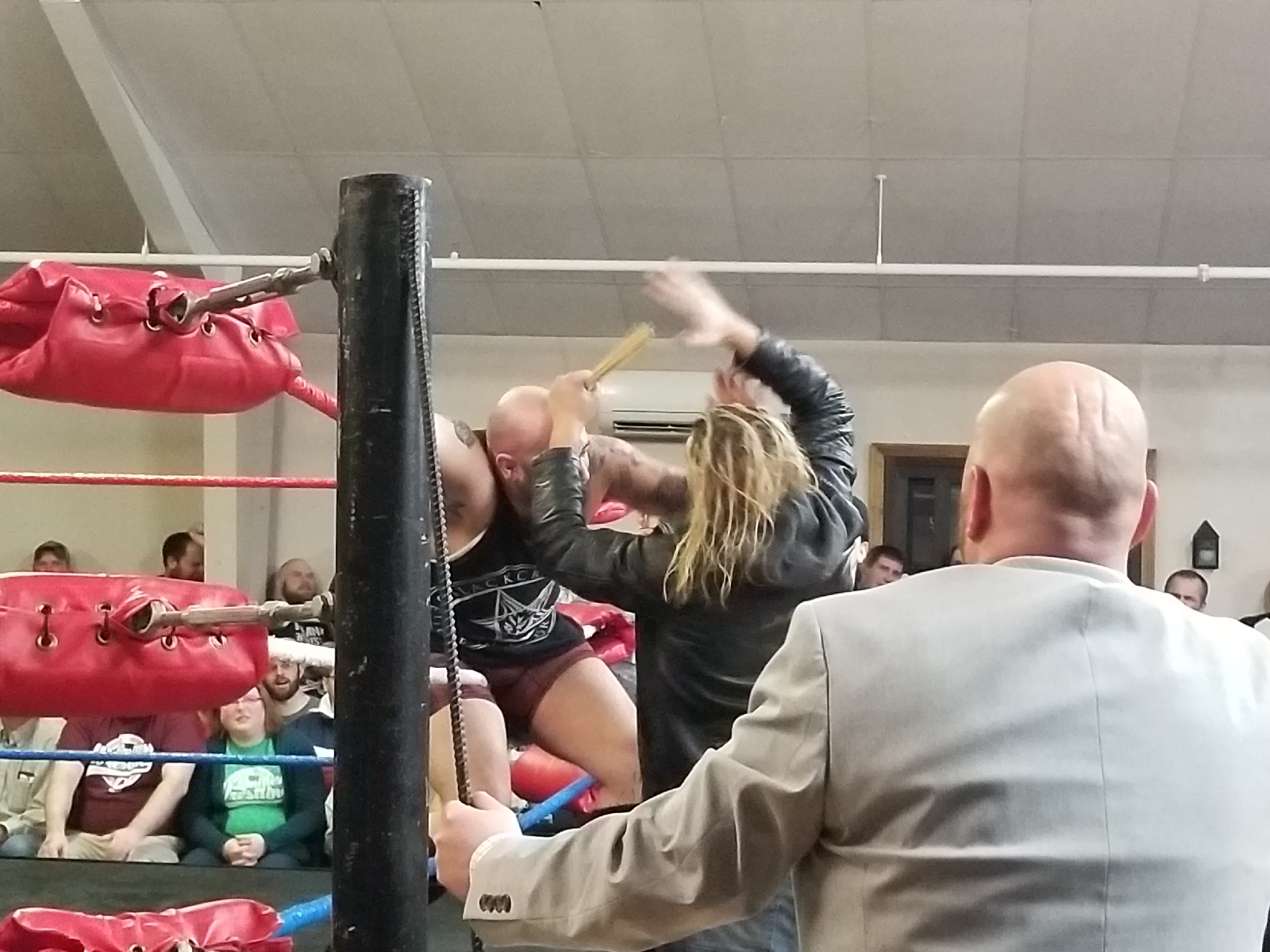 I'm not a fan of Puf, people love him and he's a nice guy, I'm just not a fan of his in ring.  Puf got the pin on Silver, then post match they reconciled drinking a beer together.  I really wanted Silver to take the beer and then beat Puf down.

This was a great match!  The two meshed together very well with Dunn continuing to tell Cruz that he wasn't worthy and Cruz proving him wrong.  Cruz went for the BDE: Best Dropkick Ever, but Dunn side stepped him his DBE: Death by Elbow scoring the three count.

After being declared the victor Dunn continued the punishment on Cruz.  Dunn knew even though he got the pinfall he didn't prove what he set out to do which was show that Cruz couldn't hang with him.  When referee Kevin Quinn attempted to pull Dunn off Cruz, Dunn shoved Quinn to the mat.  Quinn then reversed the decision awarding the contest to CJ Cruz.

Dunn continued the beat down on Cruz and Rich Palladino tried to get Dunn to stop the assault when Dunn shoved Rich to the ground.  Well that move pissed off the entire Limitless crowd jumped to their feet letting Dunn know that, that was not cool.  Sincerely you could feel the hostile tension towards Dunn for his actions, and Dunn could too as he wisely left the ring returning to the back.

Let this be a warning to all, keep your fucking hands off of Rich Palladino. 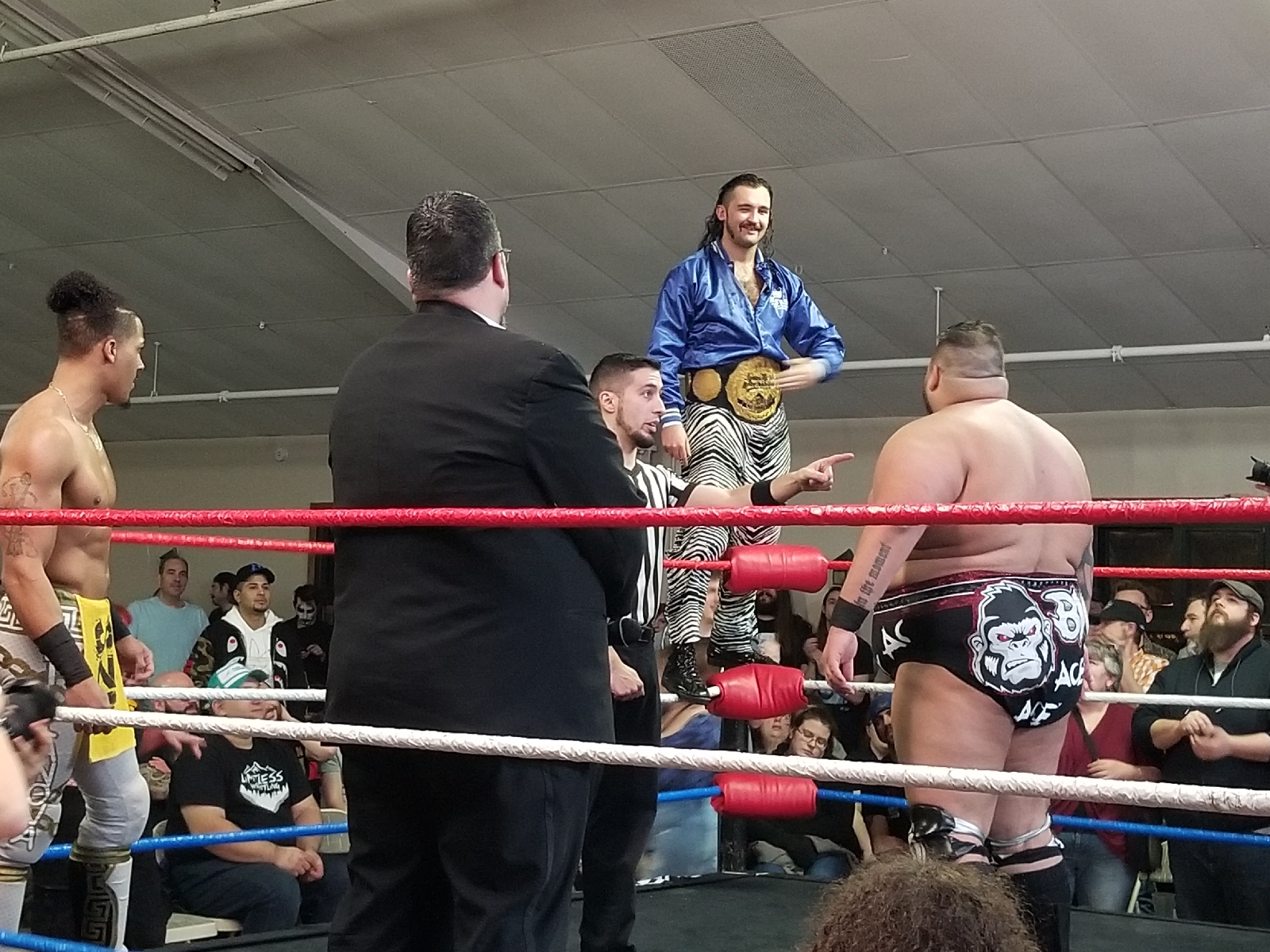 The world championship match closed out the show, as it should.  Before and throughout the match dueling chants were busted out for Casanova and Acey Baby with Greene being left out of the adulation.  I tried to get the chant going for him but my lone voice wasn't enough.

Scary moment right near the beginning of the match when Ace went to powerbomb Casanova on the ring apron but only the back of Casanova's head made contact.  The crowd was silent while the referee attended to Casanova.  It was a legit unsettling moment.

This match was very hard hitting and high impact.  One moment saw Greene trying to suplex Casanova off the top rope and Ace powerbombing Greene at the same time.  It was wicked.  Greene stole the pin after Casanova his his ax kick on Ace from the top rope and Greene tossed Casanova out of the ring pinning Ace.

Post match Casanova and Greene brawled with Casanova demanding another match against Greene.  Again this match was fantastic, lots of action and some great offense from everyone.  Casanova will be champion someday, just not while Greene is holding onto the gold. 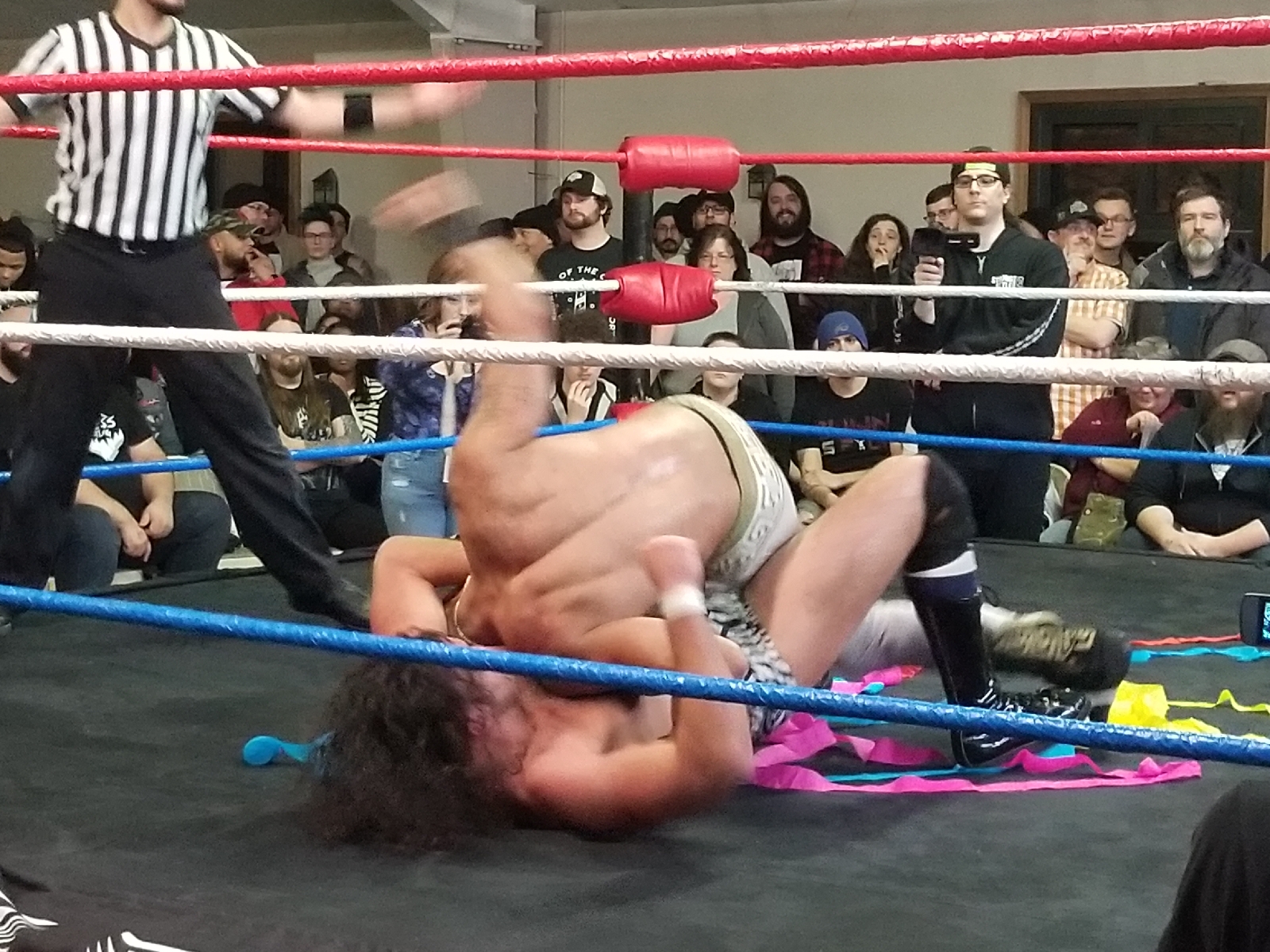 I bought a couple packs of the Series 2 Limitless Wrestling trading cards and managed to get a few of them signed as well.  I detail this in a coming post.

It was a wild and crazy night with some awesome wrestling and fun moments.  I loved the surprise of Kris Stat and the return of Brandon Kirk.  The announcements for the next show at awesome, I'm already excited about next month.

Limitless Wrestling returns Saturday February 22nd at the AmVets in Yarmouth with Anthony Greene defending against "Dirty Daddy" Chris Dickinson and the debut of Trevor Murdoch!! I super stoked about Murdoch coming in!  Tickets on sale Friday January 31st at 7pm.

Until next time!
Posted by Michael J. Labbe at 8:45 PM