On Saturday January 11, 2020 Let's Wrestle returned to the American Legion Post 84 in Orono, Maine for Chapter 12, the Let's Wrestle Rumble! 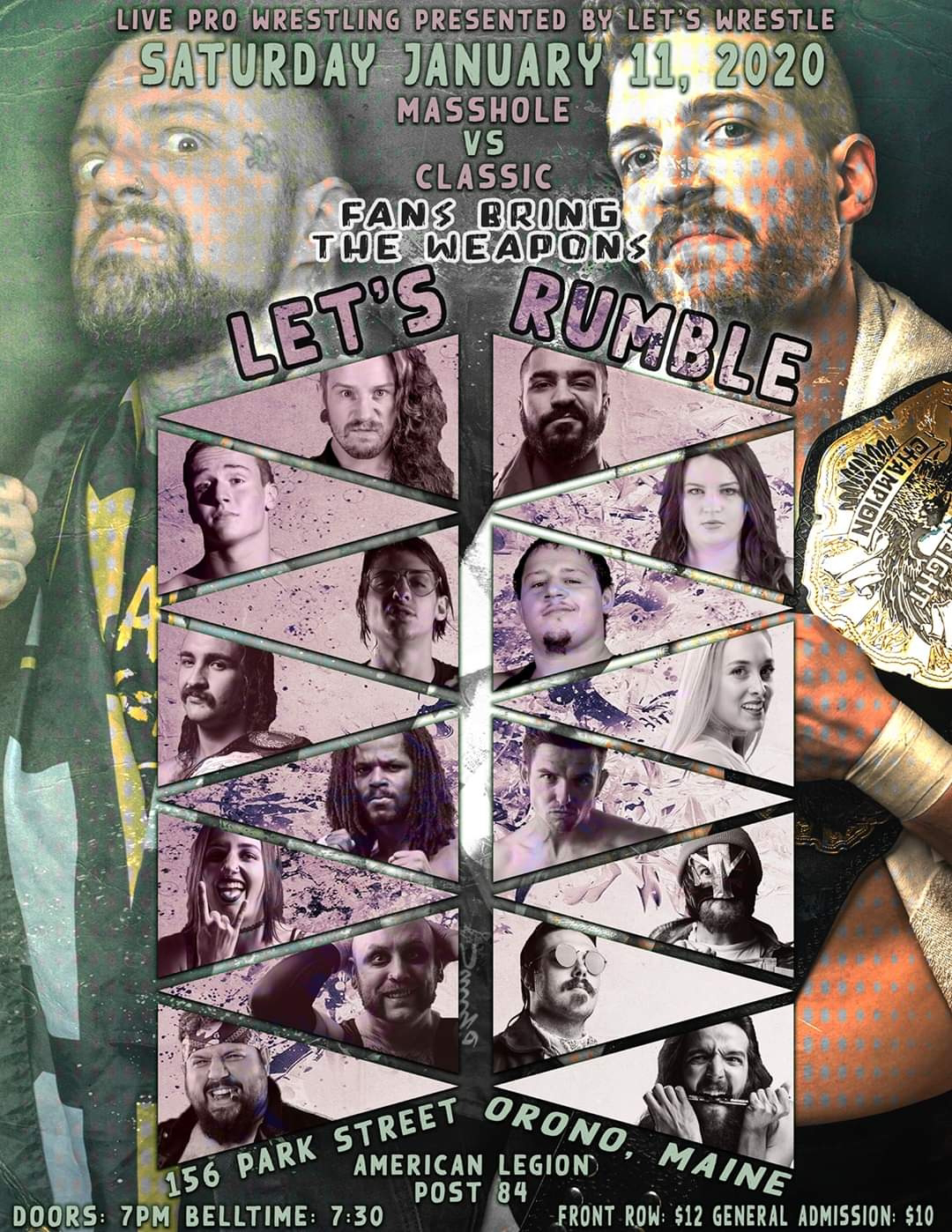 Mikey joined Canaan and myself, as well as my nephew AJ for our first wrestling live event of the year.  This is actually my nephew's first ever Indy show and also part of his Christmas present as he asked me to take him to wrestling.  I had taken him to WWE last July.

We parked at the venue then walked next door to have dinner with Roy at the OHOP before heading back to stand inline at the venue.  Because Maine winter can be very dumb at times it was 52 degrees so waiting outside for the doors to open wasn't all that bad.

I had bought front row seats for use and Mikey was going to buy as General Admission at the door, but someone was trying to give away a front row ticket they had and Mikey was the lucky recipient. This is the third time in the last four shows he's been too that he's gotten a free ticket. 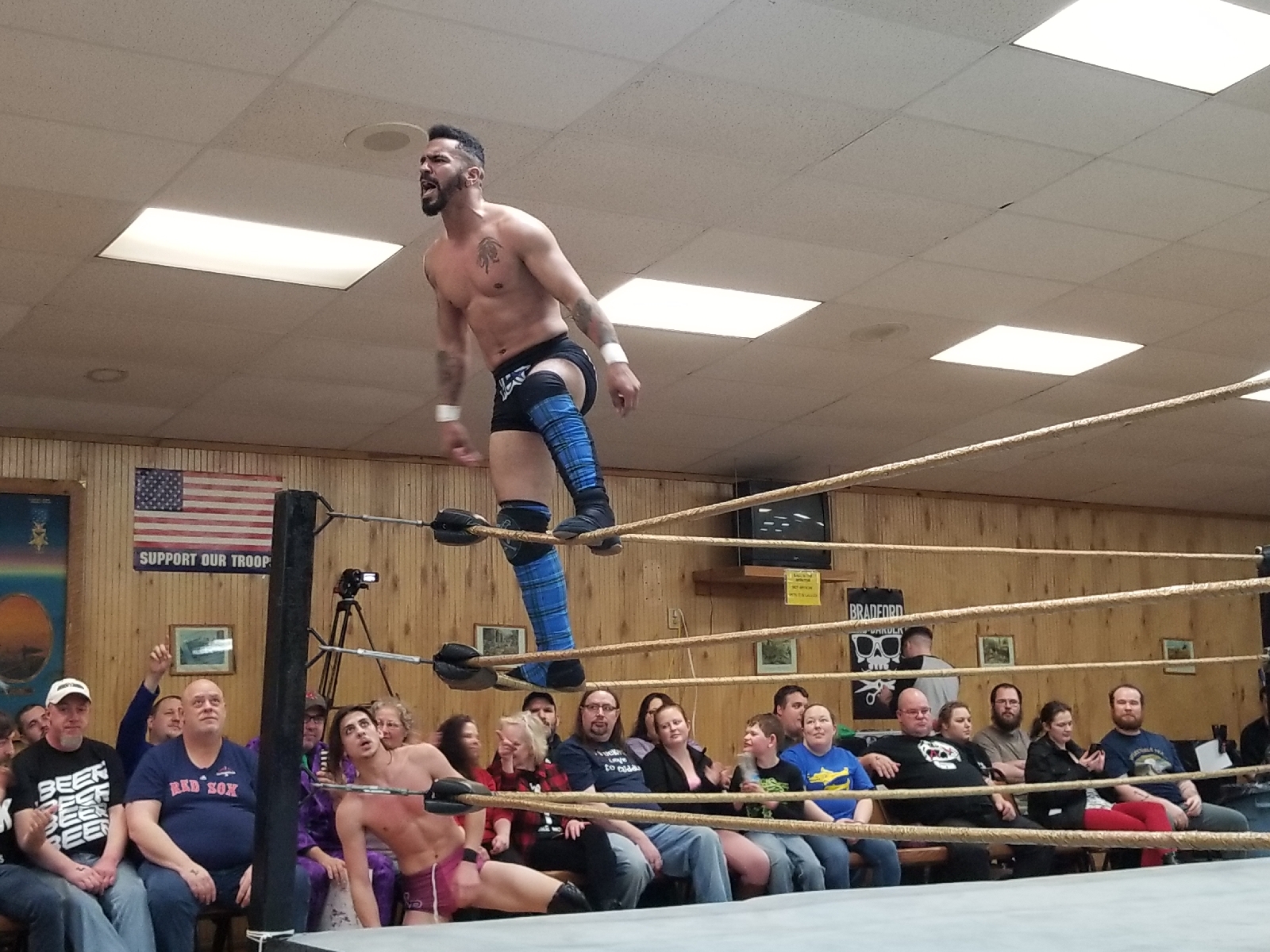 Solid opening match with all four wrestlers giving it their all.  The action was fast paced with his great high intensity.  The crowd was really into it as well.  Aggro stole pin on Wild after Price hit his finish on Wild and Aggro threw him out of the ring.

I haven't seen Blaze in a while and post match Kid allude to the fact that Blaze hasn't wrestled in two years.  I thought the match was very good with both guys showing us some good technical wrestling before picking up the pace.  The crowd was super quiet for this match and I can't figure out why.  Multiple times though-out the night it was be as quiet as a library in the building kind of threw me off. 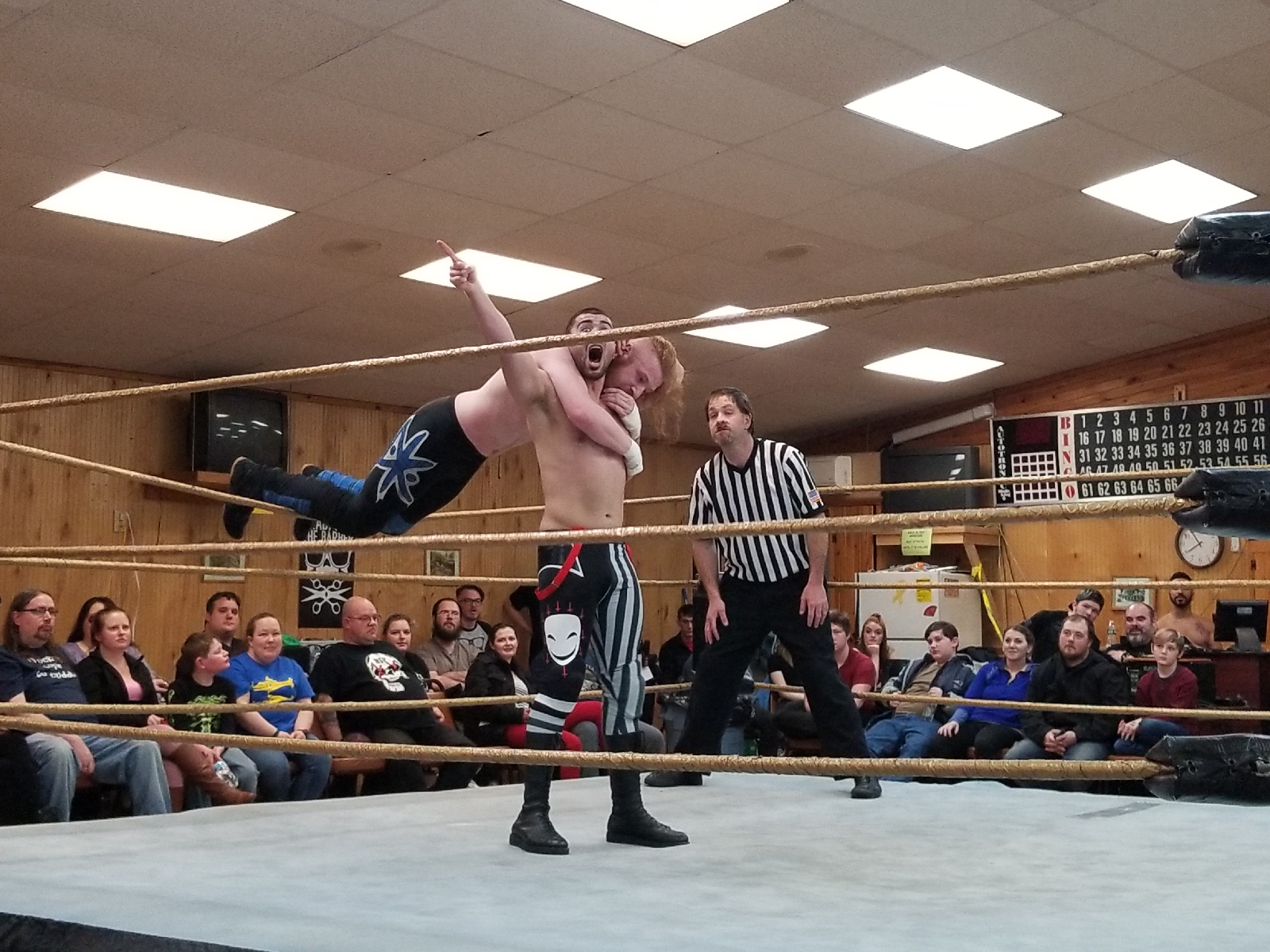 Finish came when Kid was on the apron and Blaze was suplexing him into the ring and Kid reversed it into a small package for the three count.

Post Match: Aggro came out and Kid asked General Manager Torres and Eric Johnson come to the ring.  Essentially MSP challenged The Stigma to a tag team championship match, they said that Johnson trained them, but he hasn't wrestled them in years and as they are now.  Match was made for the next show on February 8th back in Orono.

DL Hurst vs. CJ Cruz
This was a fantastic match and I'm not surprised.  Both of these guys are two to watch here in New England as these guys are going to have a big 2020.  I'm a fan of both of them, but I was hoping Hurst was going to pick up the win. 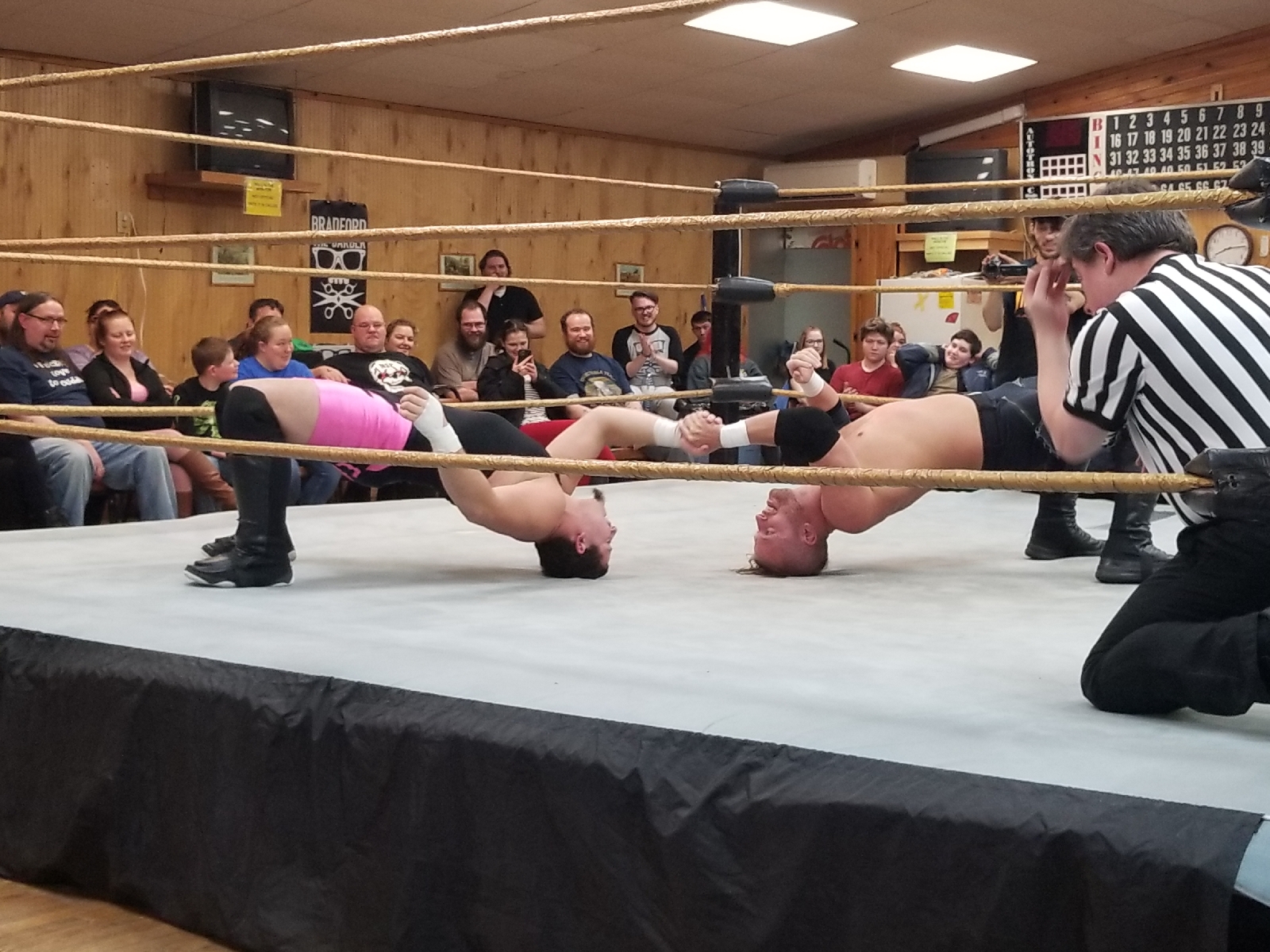 Again a fantastic match that went back and forth no one having the clear upper hand but both getting in some great moves.  In the end Hurst fell victim to that beautiful missile drop kick that Cruz has.  I don't know what he calls it but Cruz Missile would be cool.

Some decent weapons including an umbrella, a couple kendo sitcks, 7 lbs of used staples, and some ass hole that brought a Dolphins helmet.  To the surprise of no one the match quickly got physical with the weapons coming into the play.  To me though the most violent spot in the match was when McCarthy was standing on the apron and suplexed Strange who was standing in the ring onto the floor. 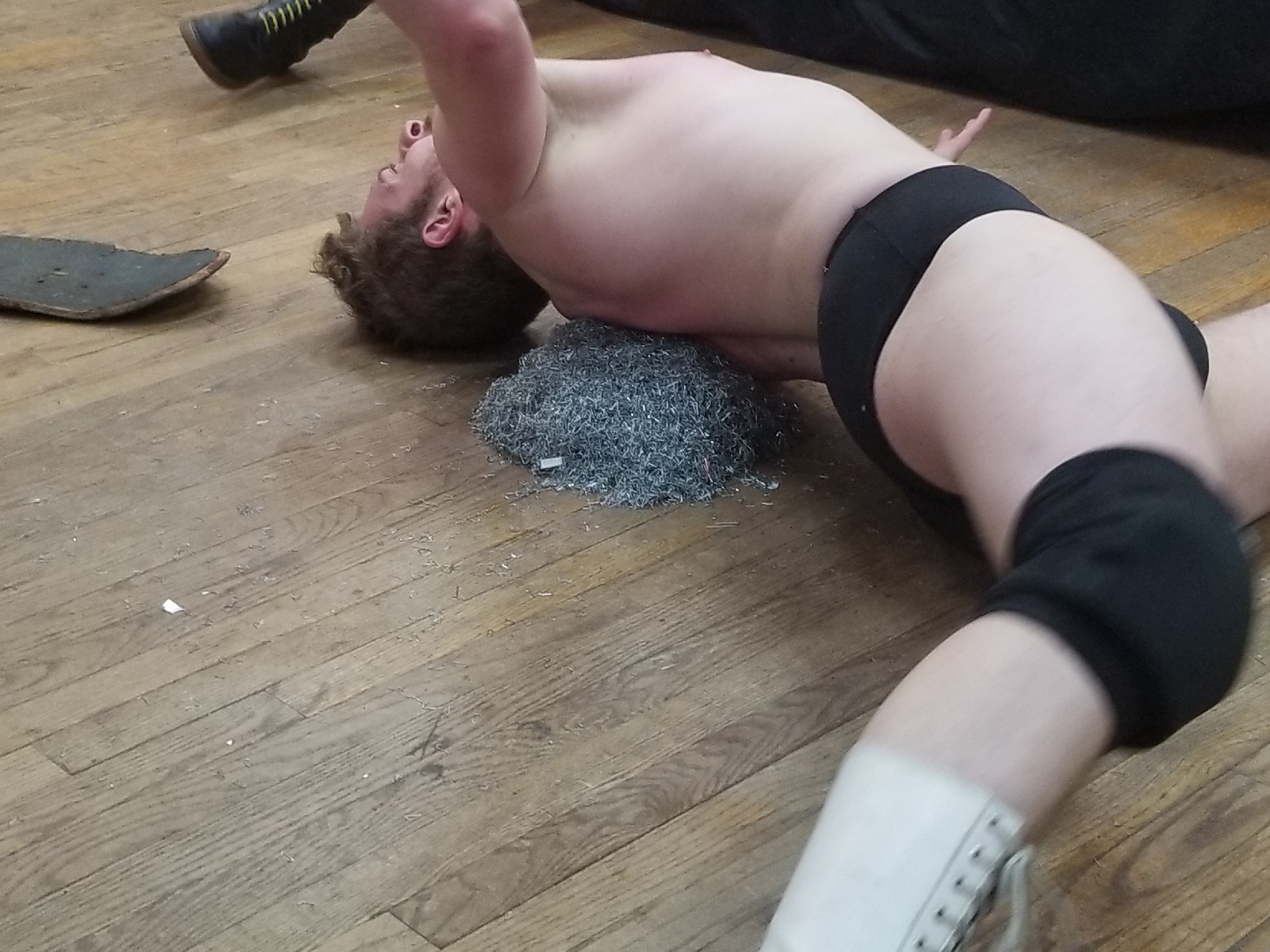 He then  dumped the blob that was the seven pounds of used staples on the floor and bodyslammed Strange on them.  It was wicked!  The match continued back in the ring where Strange for the upper hand with a cane shot to the head and then a headbutt to McCarthy while wearing the Miami Dolphins helmet.  At this point the Mass Hole was busted open. 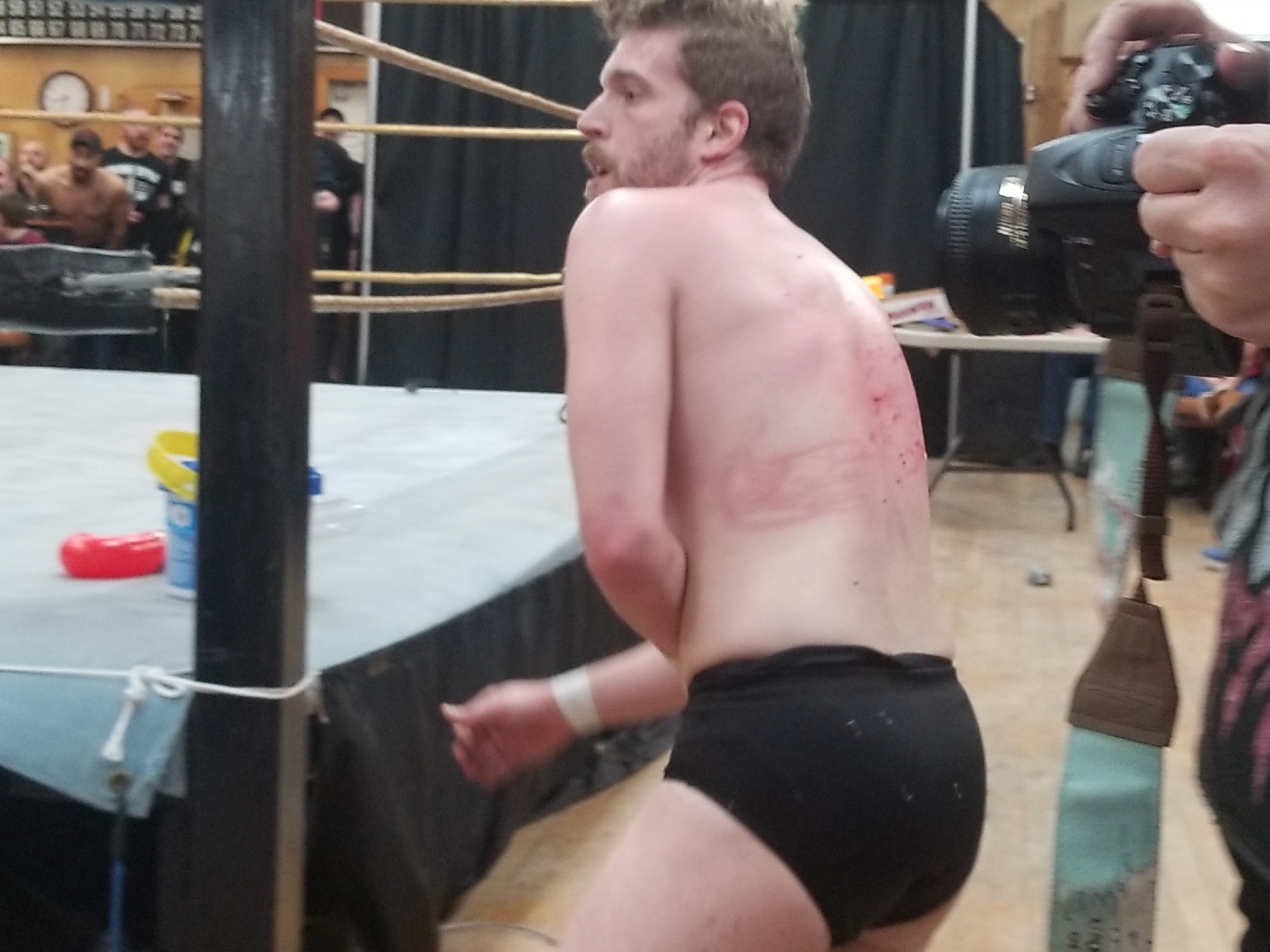 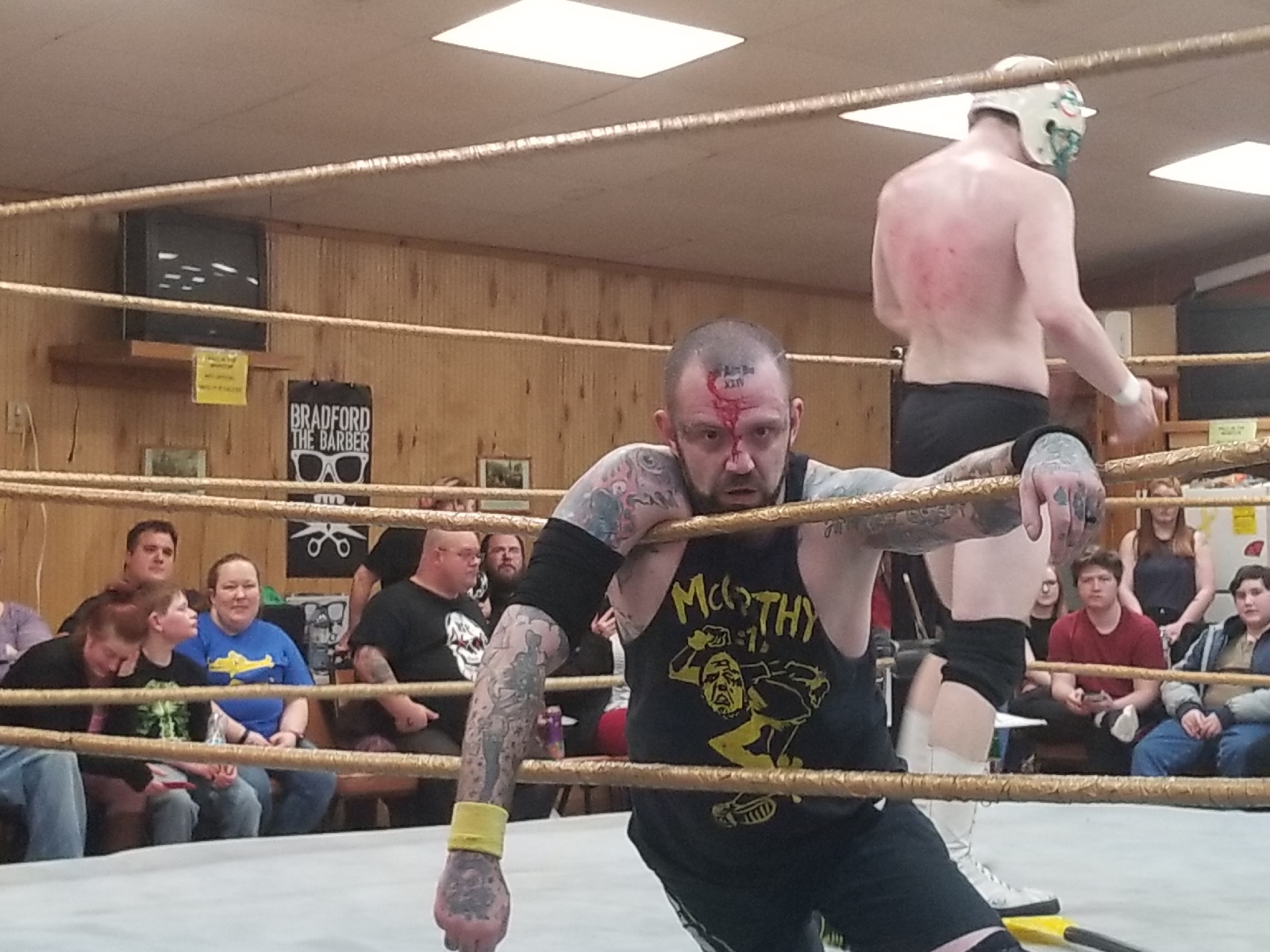 Strange would have been wise to keep the helmet on because in the end McCarthy jumped off the top rope finishing Strange with a DDT capturing the championship! 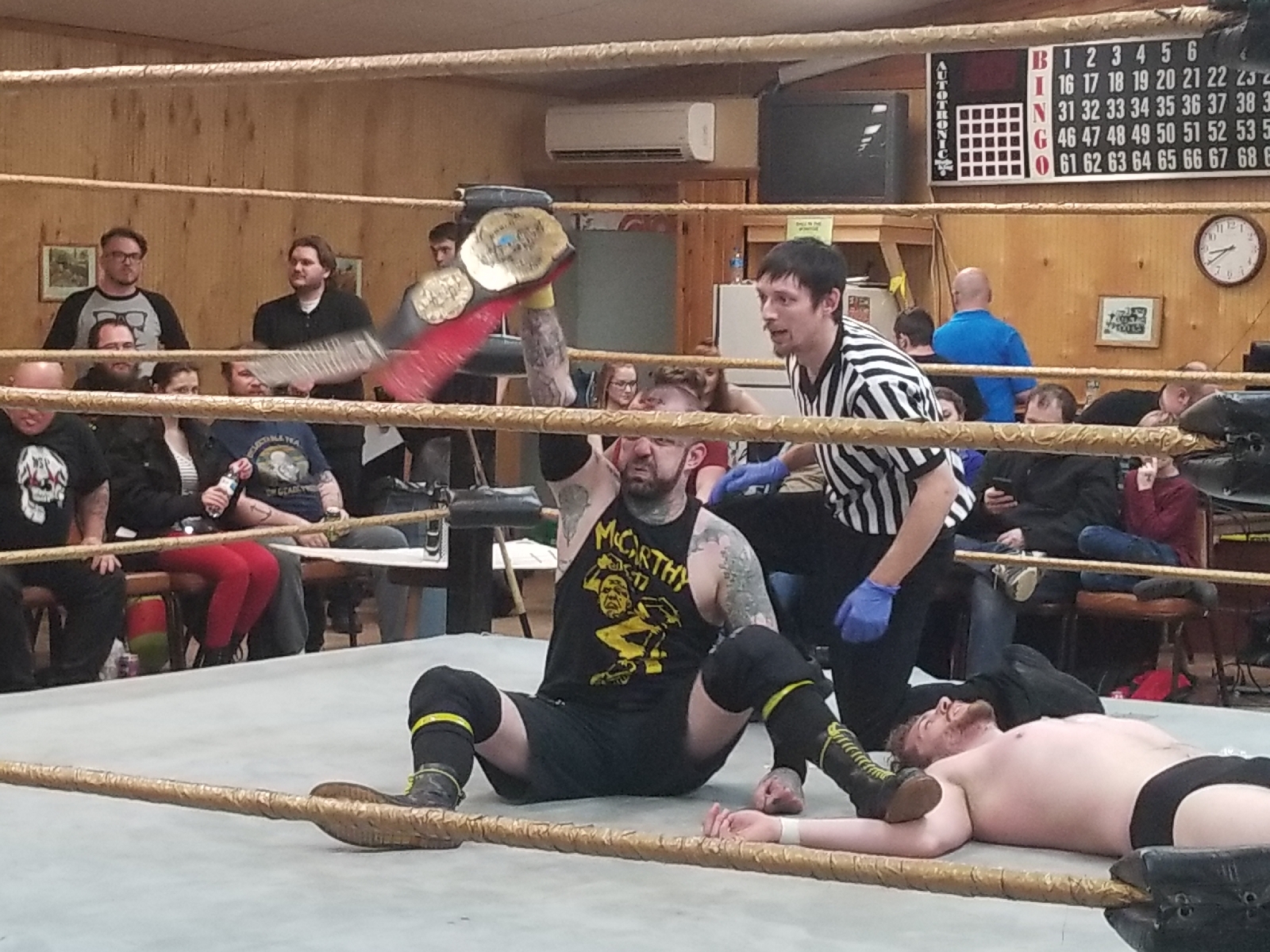 We then had an intermission while the ring and ringside area were cleaned up.  AJ got his photo taken with the Maine State Posse. 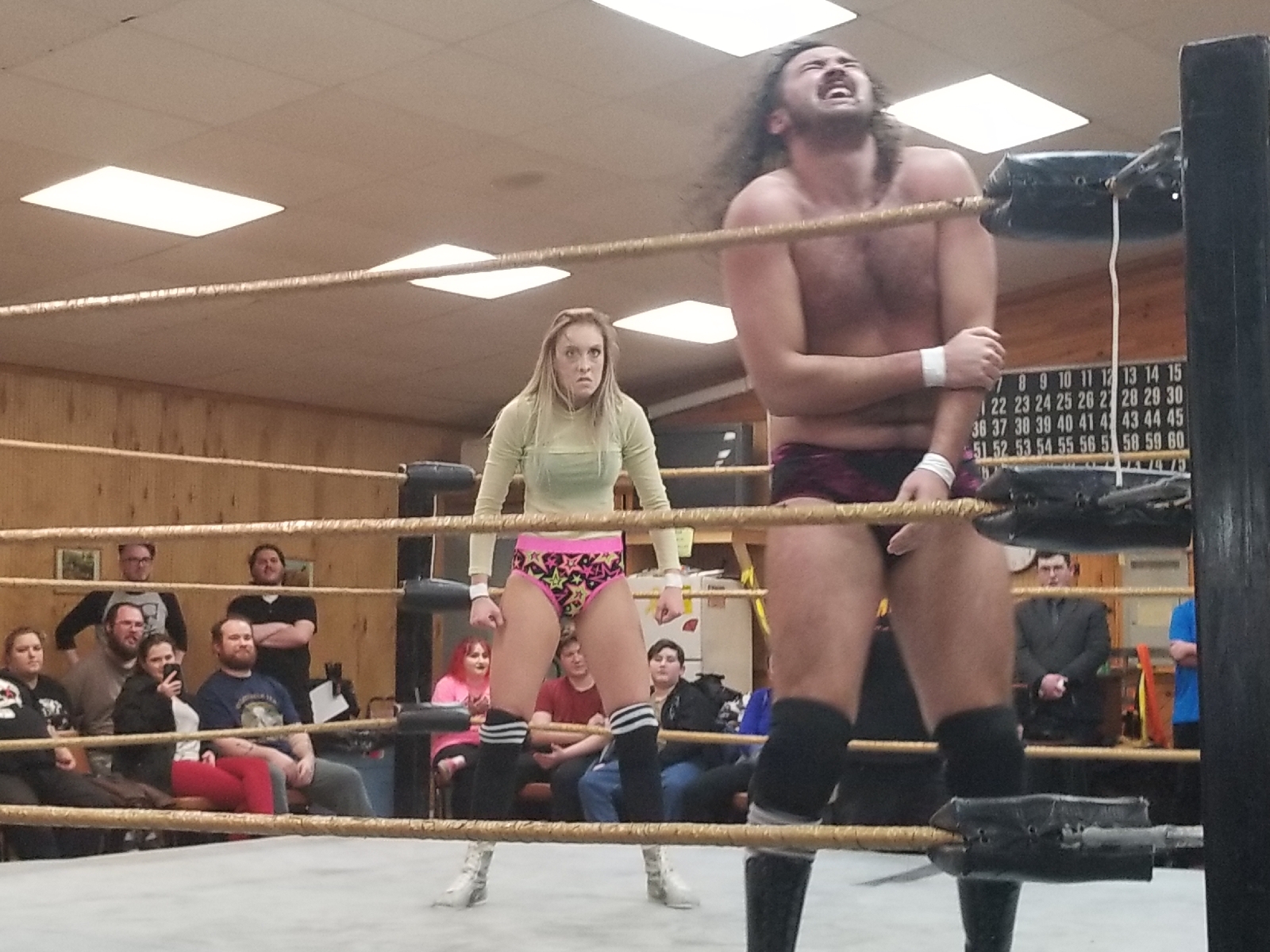 It's Ava's birthday and the open challenge was answered by her boyfriend AG who gifted her a cake that said It Is Your Birthday and a title shot for the Limitless Wrestling World Championship.  Ava used every dirty trick that she could use and cheated as much as she could, but it wasn't enough for her to win the championship as AG retained with his corner pull up piledriver. 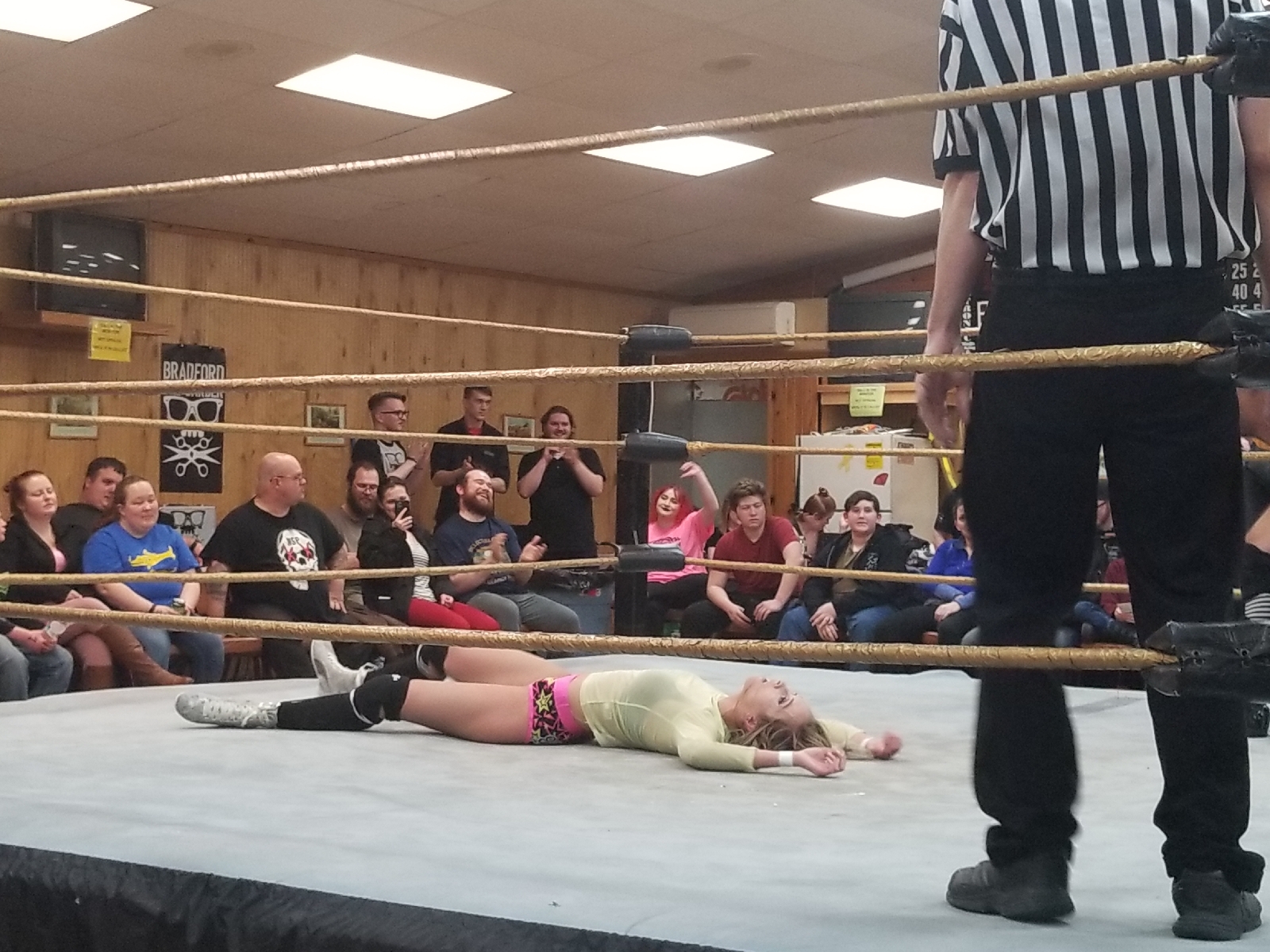 I know what you are thinking, there is a cake at ringside, whose face did it end up in? Why Eric Greenleaf. 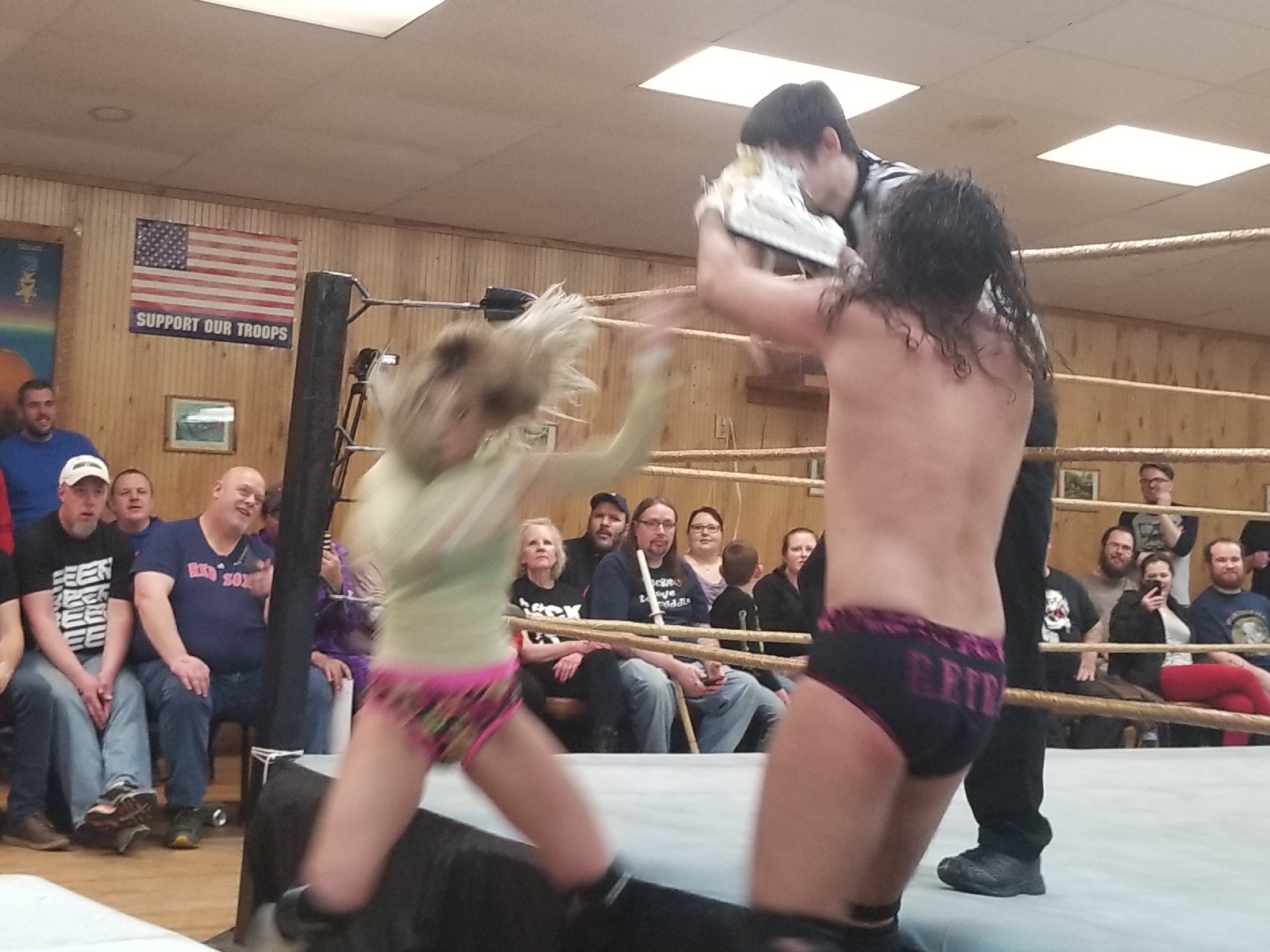 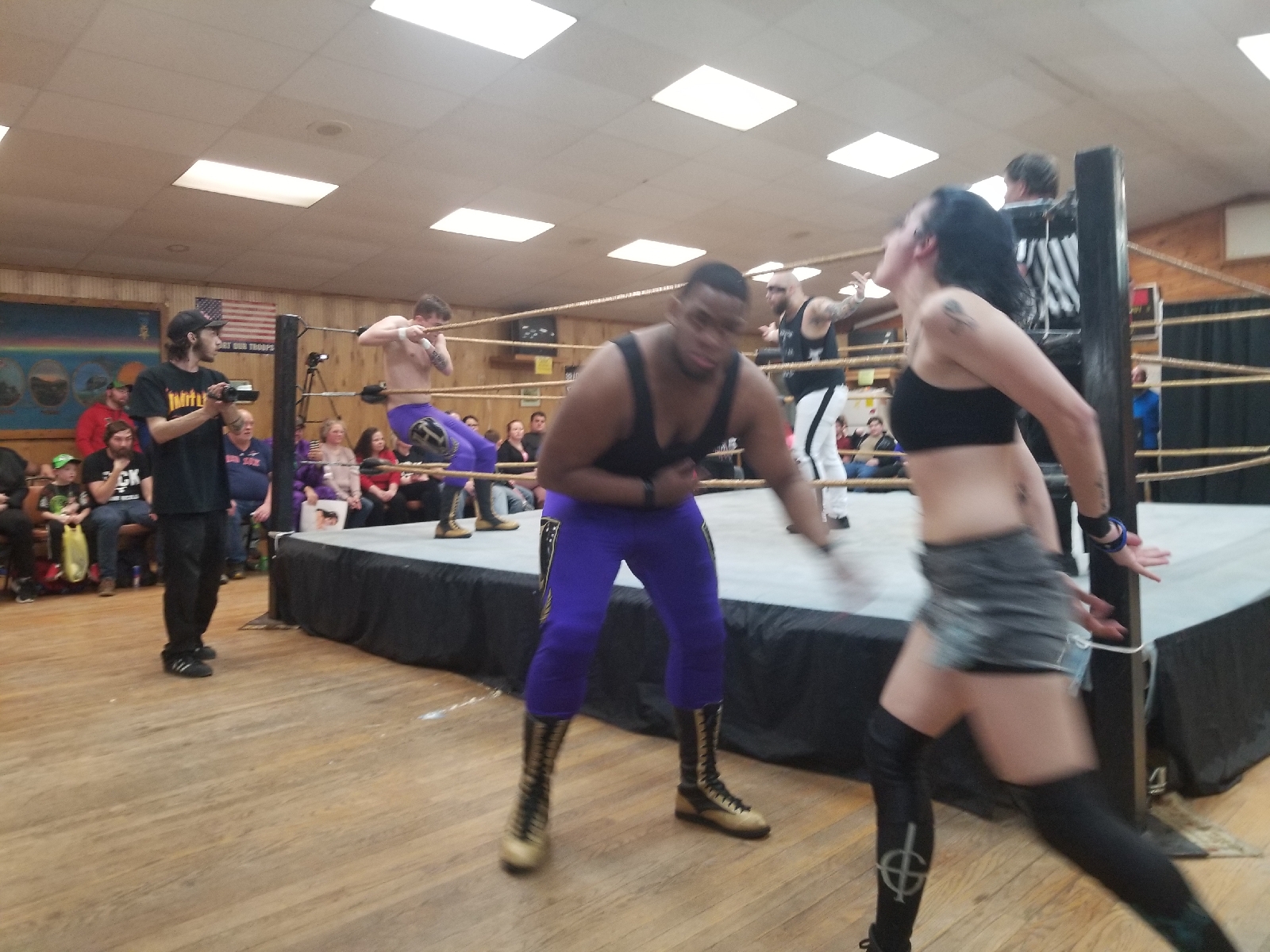 Fun tag team match with KenneLee coming out on top when Alexander Lee pinned Logan after a splash off the top rope. I appreciated the fact that Harris Country Club wore their old school matching gear.  I've only seen Copeland live a few times over the years but I must say that she has gotten better and continues to do better.  I really dig the tag team of KenneLee. 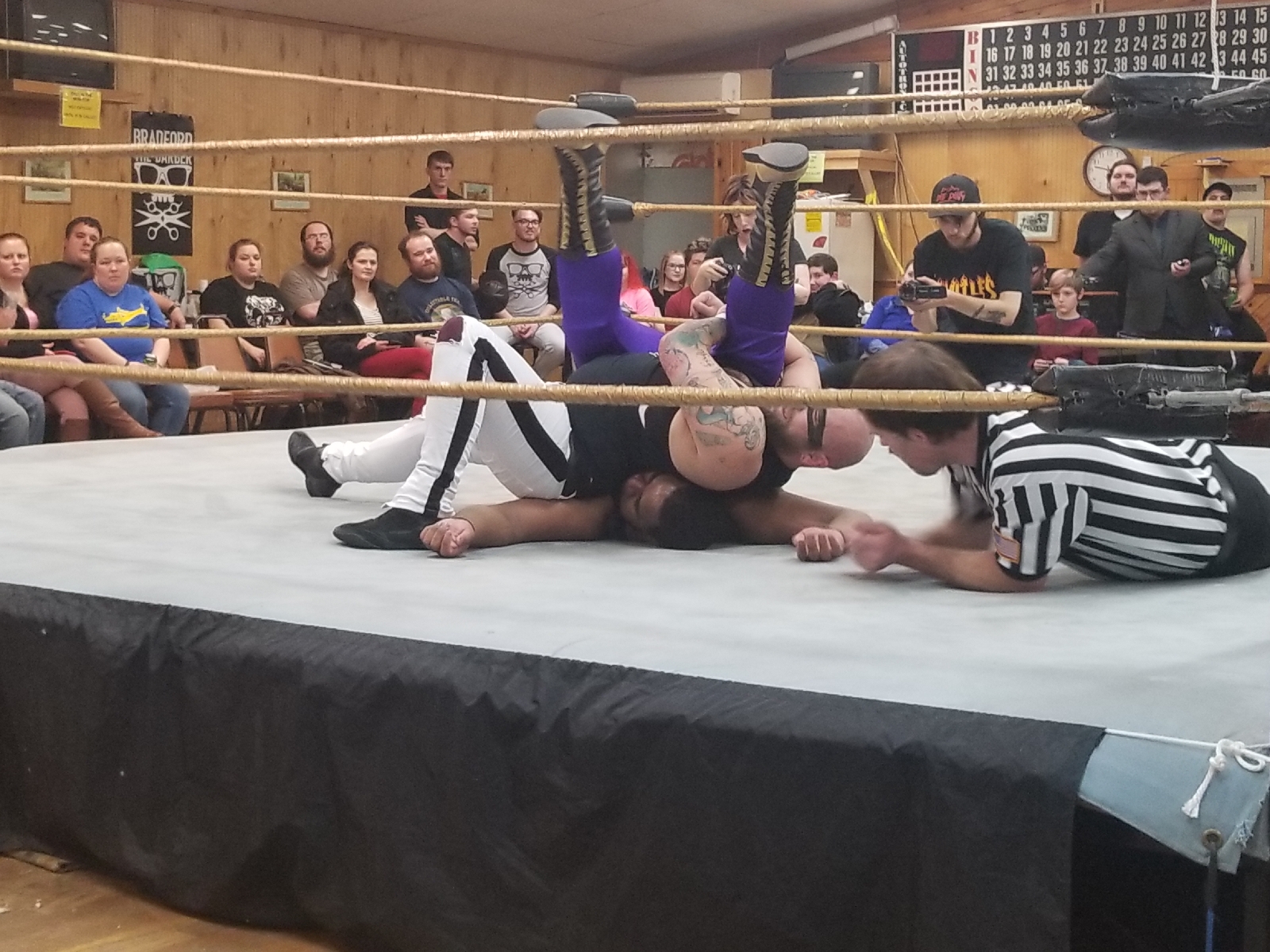 I think overall this years Rumble match was better than last years.  Mikey was convinced that D'Lo Brown was going to be a surprise entrant, I even brought my cards just in case, but he wasn't.  Mac Daniels was the number 1 entrant and he brought someone to watch his back just in case one of the referee's tried to get one up on him, Jon Alba.  The crowd was pissed! 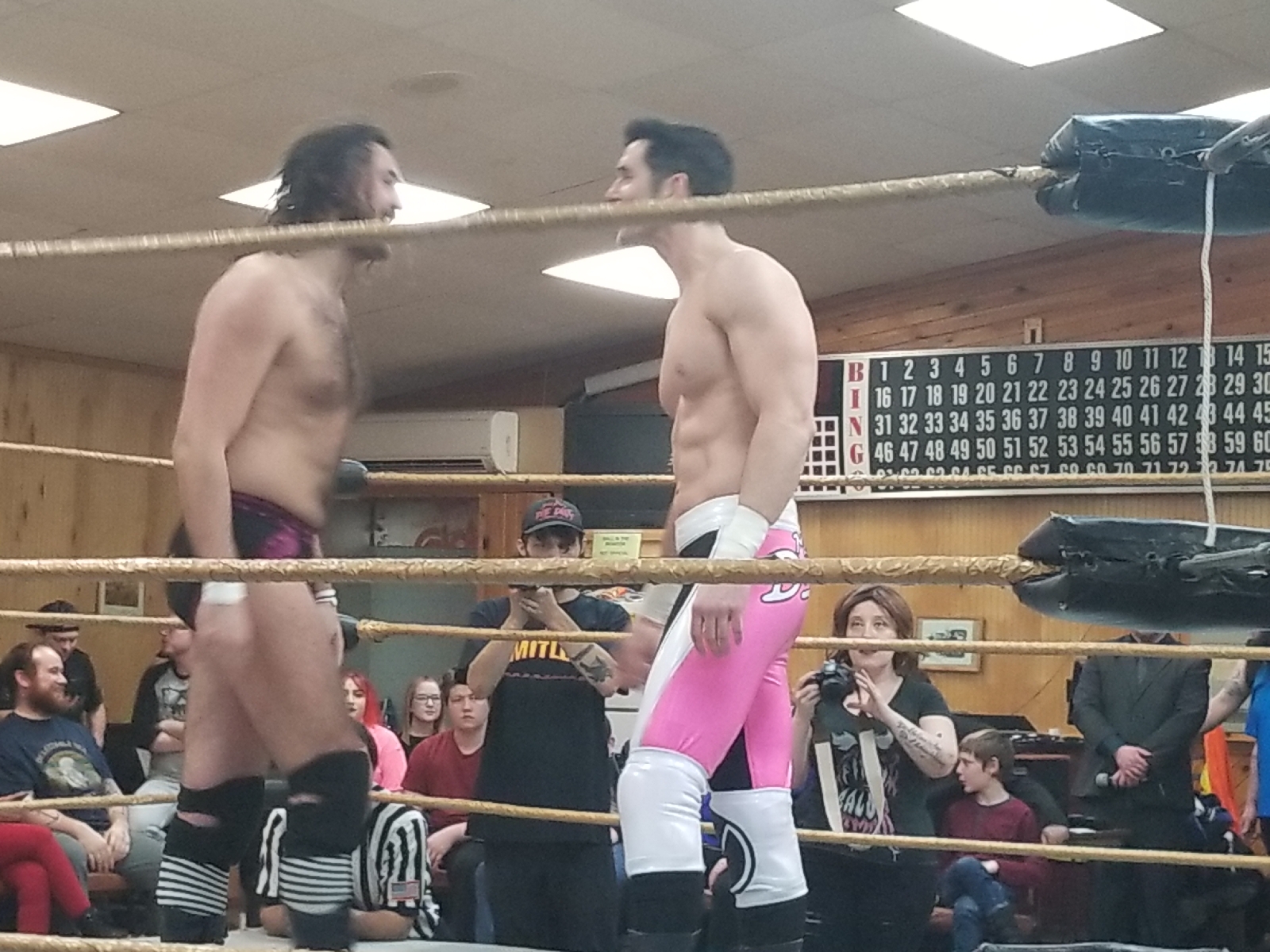 We got an entrant every 90 seconds, the ring never filled up too much and once it built up kept a good number of people in the ring at a time.  Mac Daniels lasted the longest in the match with Danger Kid lasting the second longest.  Sara Teller has the distinction of lasting the least amount of time.  Daniels eliminated the most competitors with 6 eliminations. 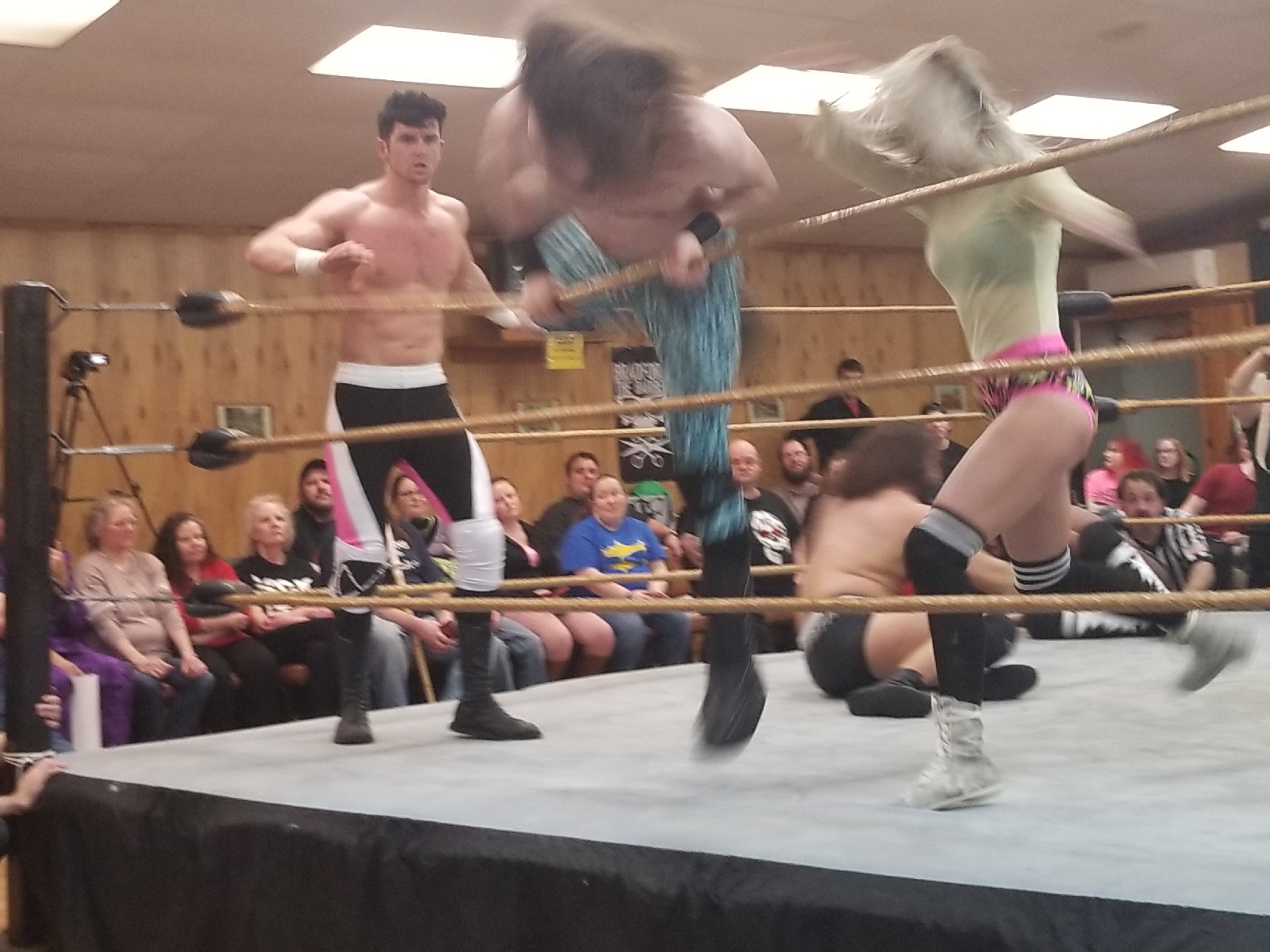 The save of the match went to Alexander Lee who body surged over Eric Greenleaf to avoid elimination. 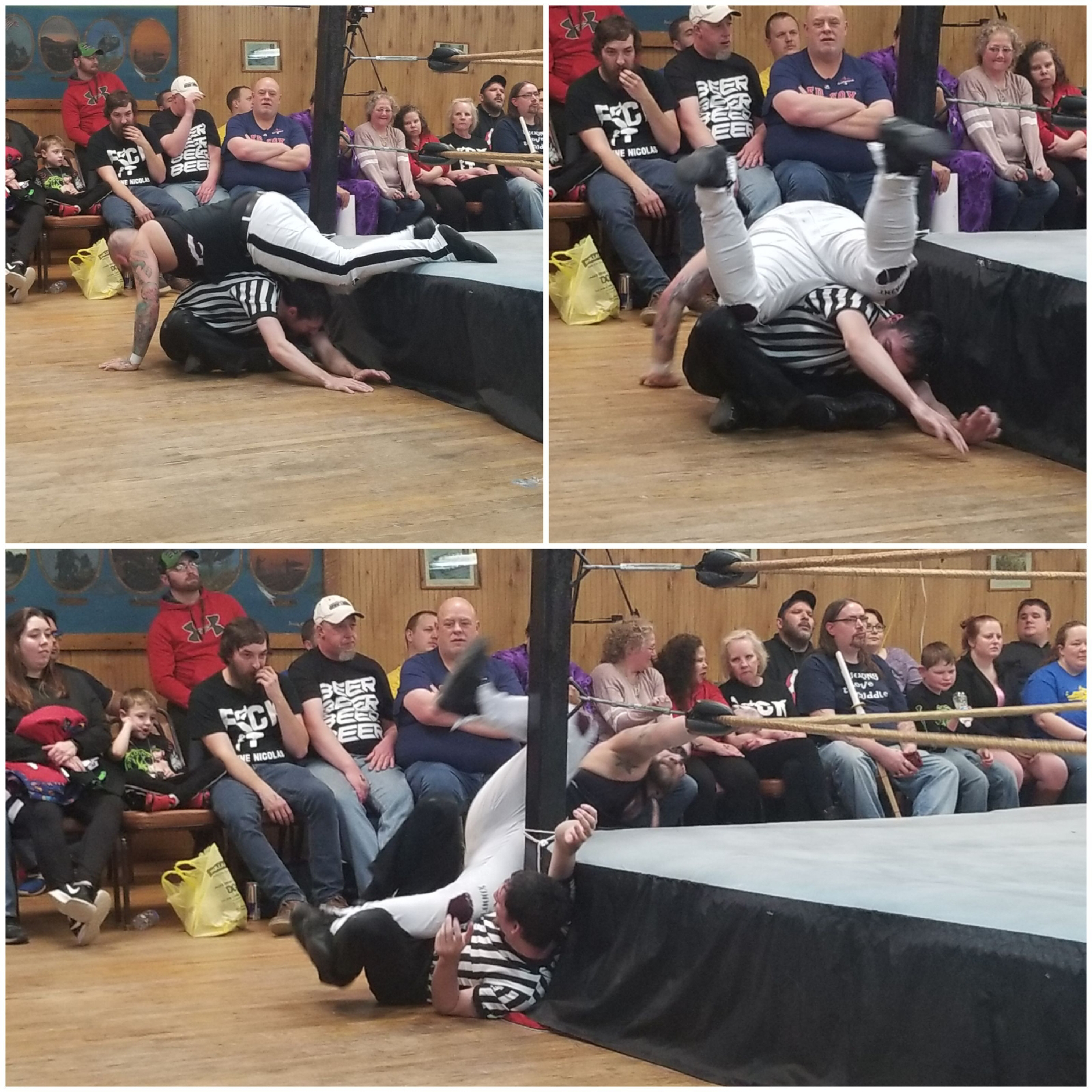 I loved when Cruz entered the match and he and Price squared off continuing their feud. It was also cool that it came down to the two of them.  I'm very excited that Price got the win,   I think he and McCarthy will have some great matches over the championship. 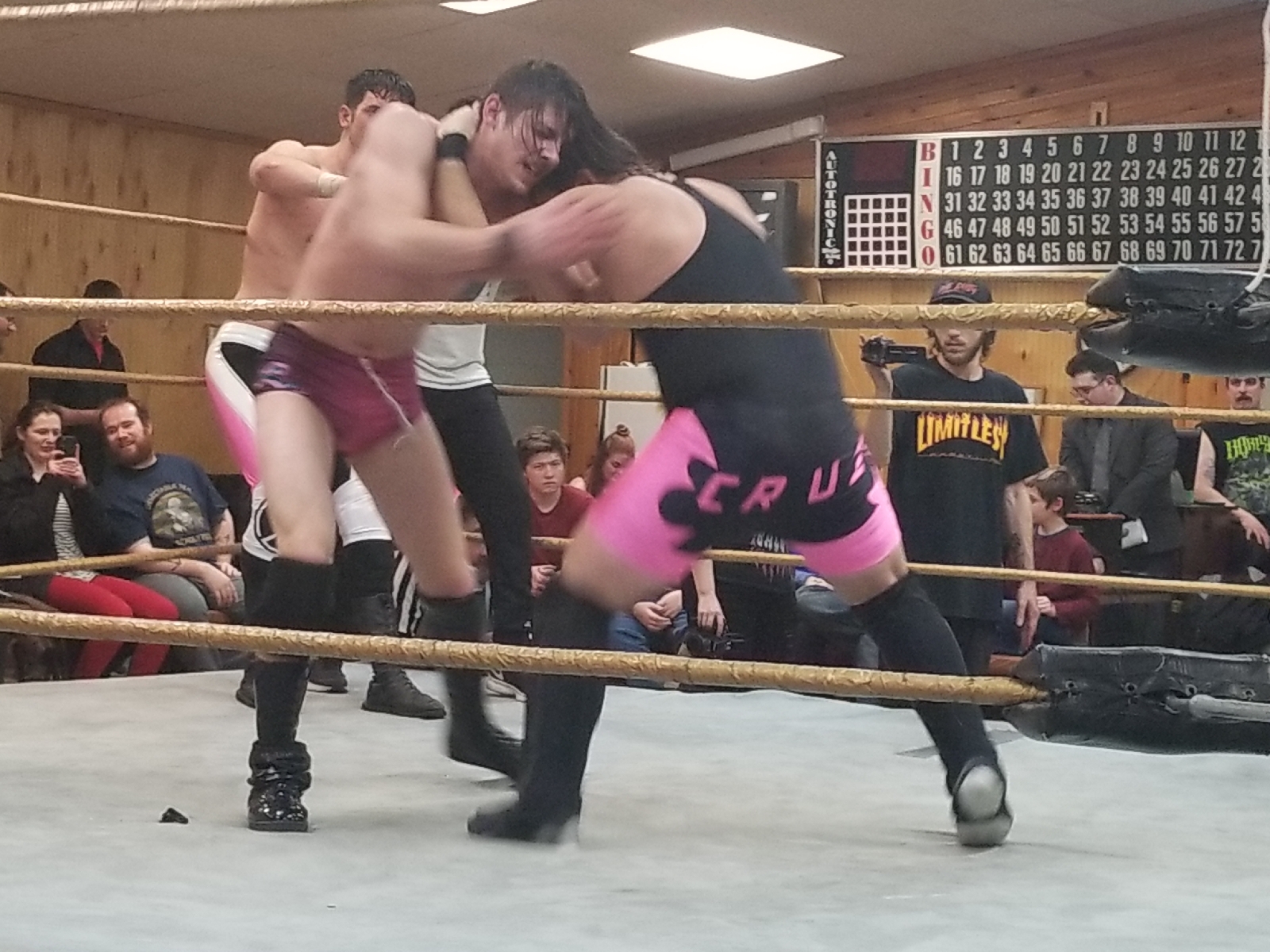 The rumble match built two new opponents for Mac Daniels with how he eliminated Greene and how he was eliminated by Cruz. 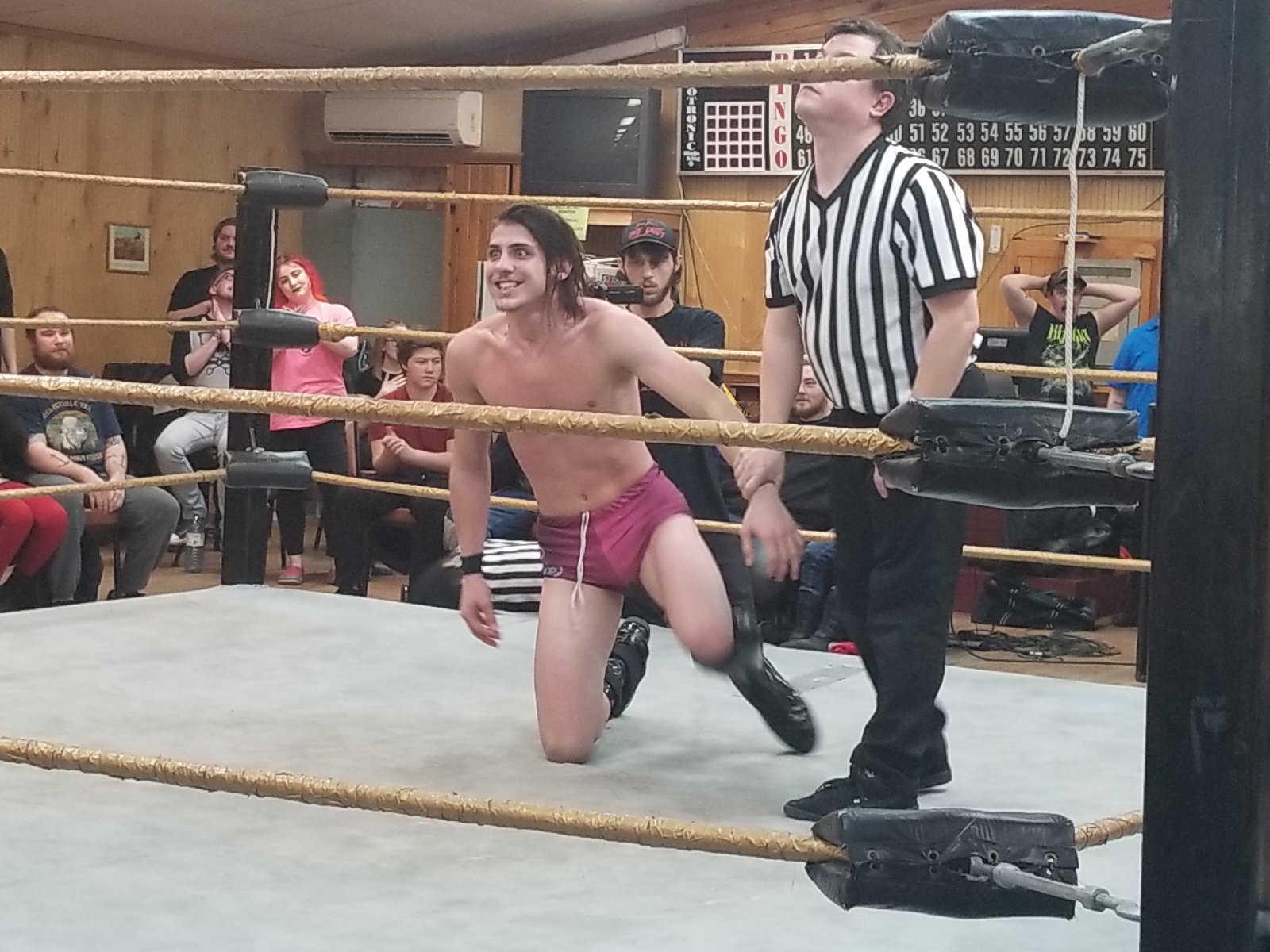 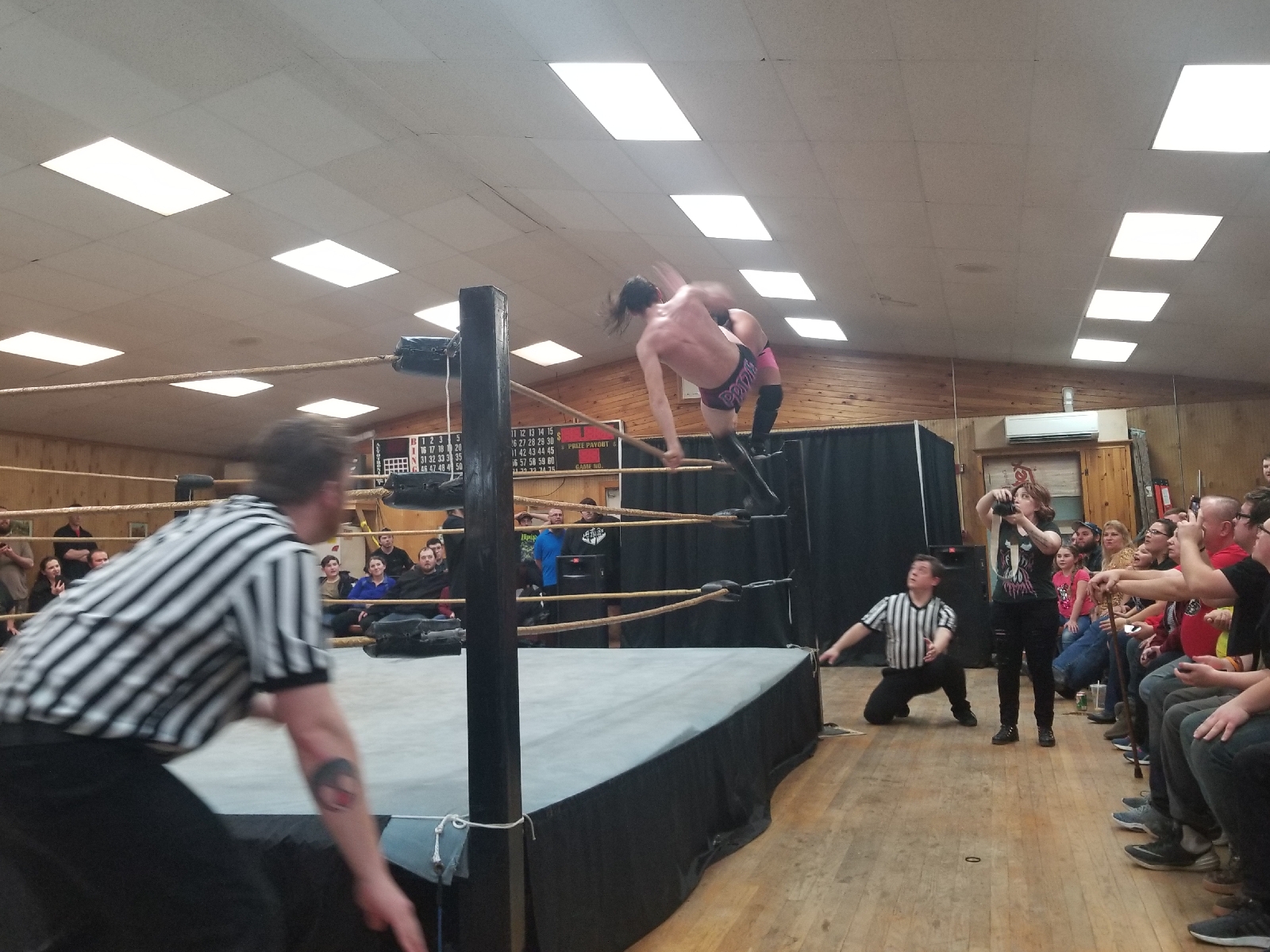 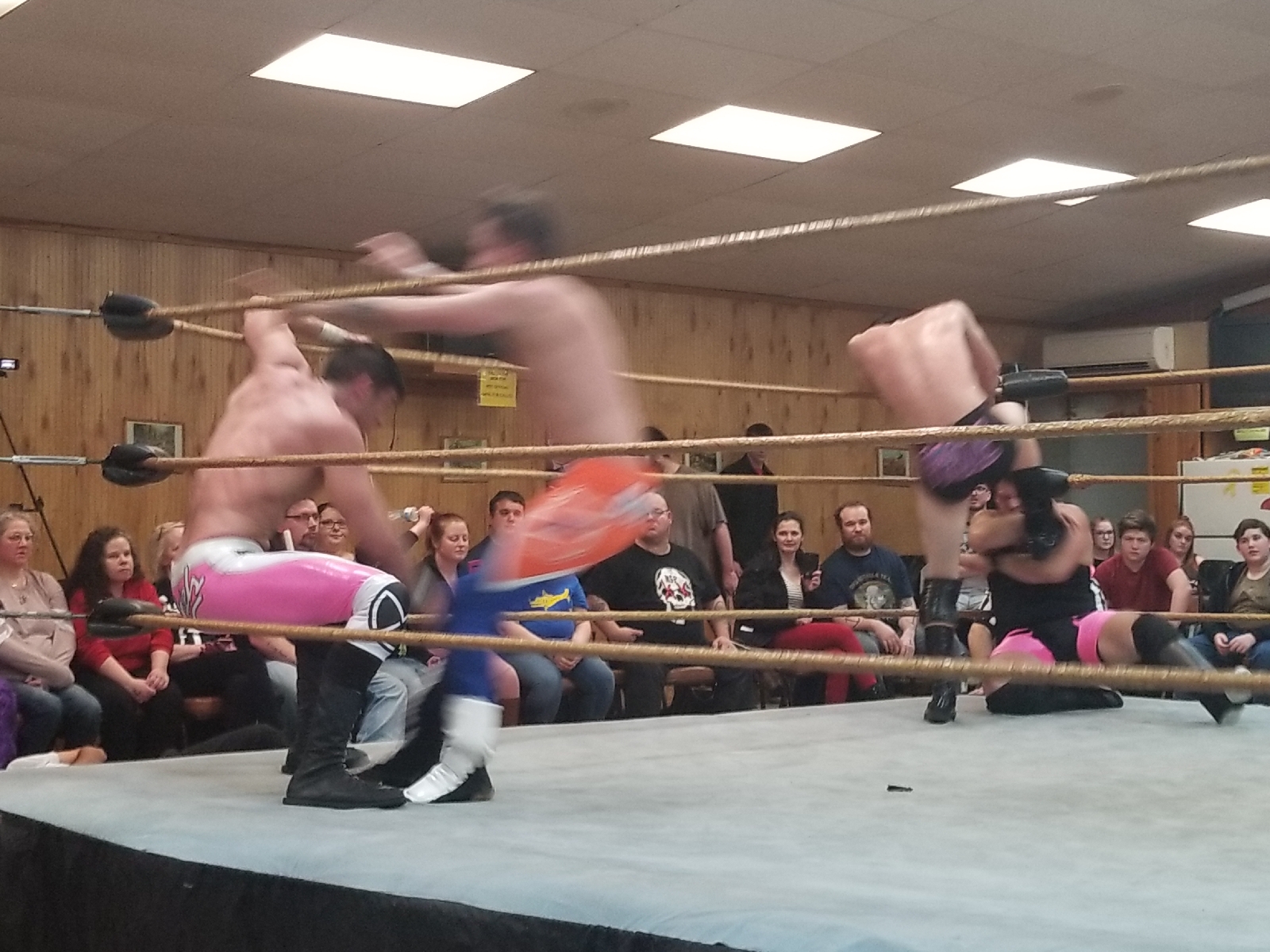 Let's Wrestle returns Saturday February 8th in Orono with Maine State Pose vs. The Stigma for the Tag Team Championships and pick your poison as Mike McCarthy and Alex Price will choose each others opponents.