This past Monday night, I attended my first NJPW event as part of the US New Beginnings Tour. New Japan promoted the event as being held in Raleigh, NC but it was actually held in Durham, NC a nearby city and home of Duke University and the Durham Bulls. The event took place at the Durham Armory, which is the same location I saw NXT Live last January which is a nice small venue for wrestling.

I must say, New Japan is really organized. Their website is full of great information like what merchandise will be on sale, how much it will cost, whether or not there is an intermission, etc. Once at the arena, the lines were well managed and organized and they even had lines set up for merchandise which I wish more wrestling organizations would do.


I looked at the tickets the morning of the event and saw that over half of the front rows were still not sold. The $200 price tag was ridiculous, as were most of the ticketing prices. Luckily, the Armory is a small venue and doesn’t really have a bad seat, but I would not have glowing things to say about the show had I spent $200 or even $80 on a ticket. Luckily for me, I purchased $30 tickets which were listed to be in the balcony, but NJPW moved seats around to fill in all the gaps. Our seats were actually on the stage, which gave us an elevated view and it was unobstructed so that made me happy. 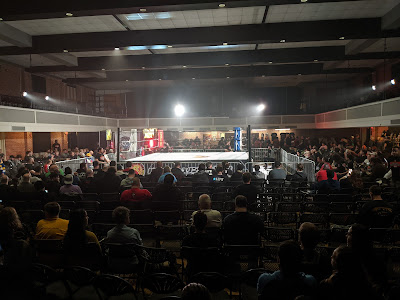 My fiancé Brandy accompanied me to New Beginnings and we found our seats quickly and shortly before 8 PM Colt Cabana and Toru Yano made their way to the ring to throw out some t-shirts and introduce a young child who was struggling with some health issues. After tossing a few shirts, Tanahashi came out with a signed t-shirt from the locker room for the child. 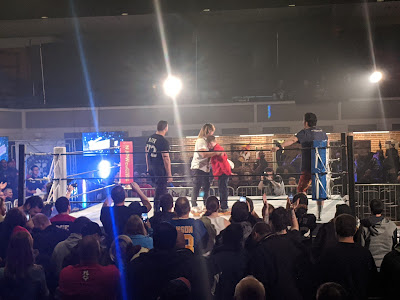 The card changed quite a bit from the initial announcement with Ibushi getting the flu and then Karl Fredericks suffered a shoulder injury. New Japan didn’t add any wrestlers, but they did move the card around some. I was pleased with the way the matches were laid out, so let’s take a quick look at them: 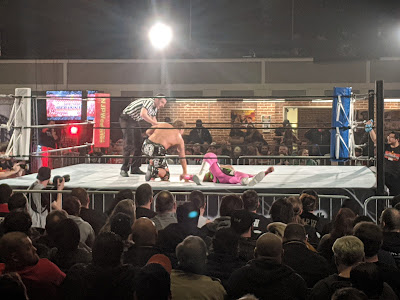 This was a decent opening match, running just over nine minutes. I can’t honestly remember anything much of note about the match other than Misterioso’s cool costume and how amazing it was to see New Japan Pro Wrestling in North Carolina. It was cool watching two wrestlers face-off in a New Japan ring with announcements in Japanese. 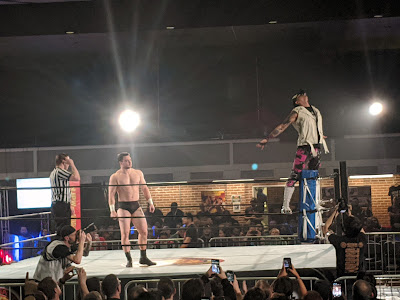 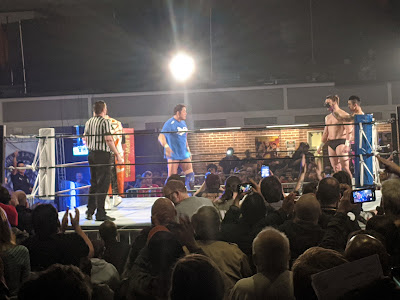 I saw Nagata and Kojima last year at the Crockett Cup and they were just as entertaining this year. This was my first time seeing TJP in the ring and while he was smooth, I wish he had a little more ring time. Alex Coughlin took a beating for the majority of the match and ended up eating the pin in the end. 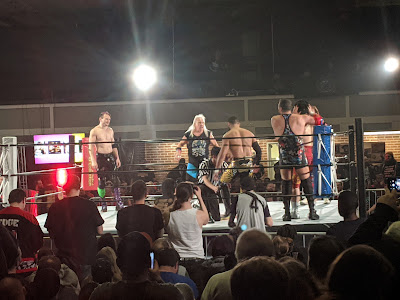 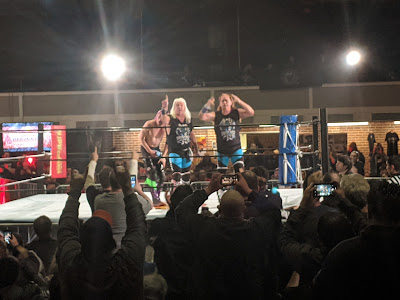 This match went about as you’d expect with Ricky Morton taking a huge beating for the majority of it. I was surprised to see that The Express didn’t get in any of their usual moves like the dive to the outside or Ricky Morton’s new Canadian Destroyer. Instead, this was a pretty basic match with the crowd firmly behind The Rock N Roll Express (we’re in Crockett Country after all). Alex Zayne was pinned and the crowd still cheered for The Rock N Roll Express.


Following The Rock N Roll Express leaving the ring, a familiar tone hits and I look up and see the video screen is showing Marty Scurll’s video. I’m sitting there stunned and confused and wondering whether or not this is an advertisement or what. Then all of a sudden, he emerges and luckily I had my camera ready. You can watch it for yourself. He came out to challenge Jay White at Supercard of Honor and this was by far the coolest surprise I’ve ever experienced live. Brandy had even mentioned on our way to the event that she hoped there would be a cool surprise and I told her not to hold her breath for a NJPW house show in America. 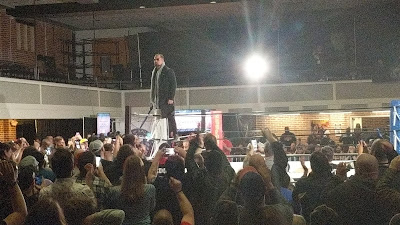 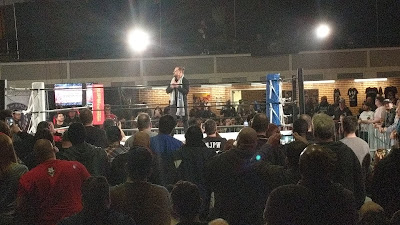 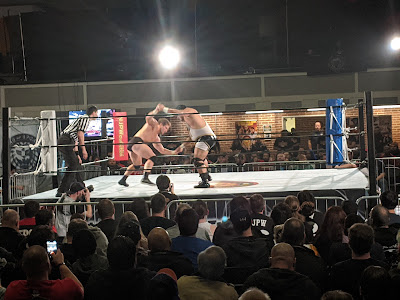 I feel like the event really started to pick up pace with this match. This was my first time see Jeff Cobb live and he is a beast. These two guys put on a heck of a fight with Clark Connors getting in more offense than I expected and showed off some impressive strength on several occasions. Cobb got the win with The Tour of The Islands. 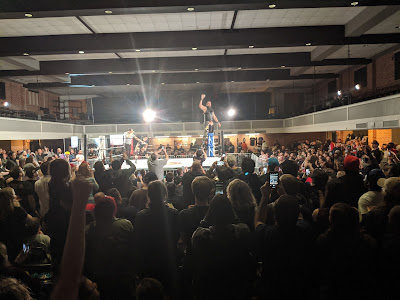 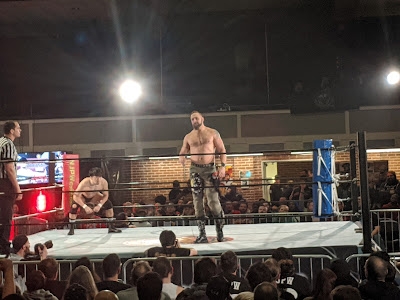 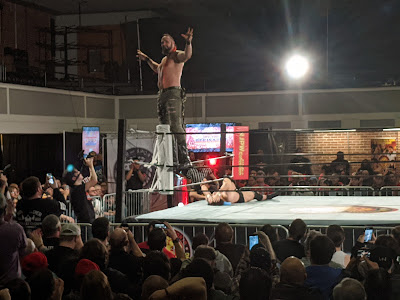 This was probably my favorite match of the night. I expected it to be a squash match, but instead, this was one of those matches where Archer controlled the crowd so much and got so much heat, that everyone was rooting for the underdog and Ren Narita put on one heck of a show. Archer got the win in the end, but not after Narita got in some flashes of offense and almost had the crowd buying he’d get in the win. Kudos to both of these guys for putting on a very entertaining match. 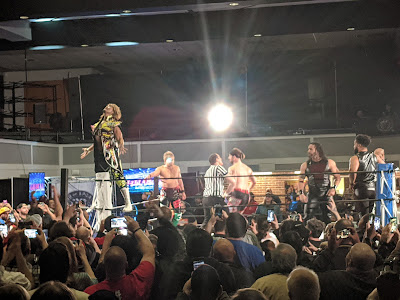 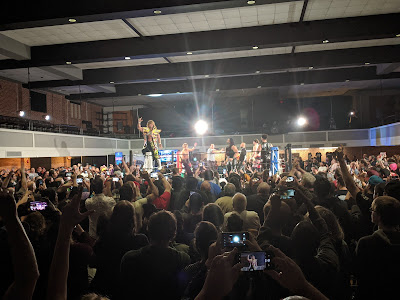 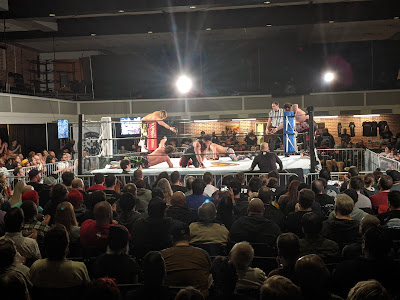 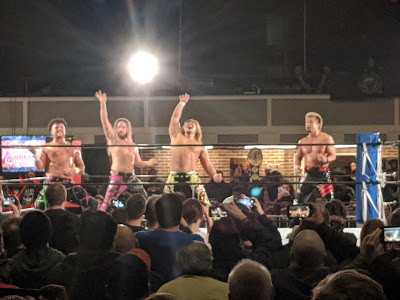 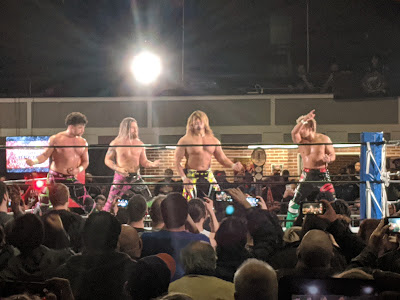 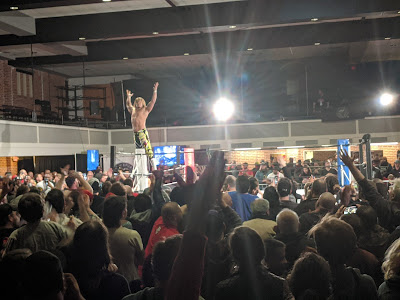 Everyone came out hitting hard and the action poured out into the crowd for the first few minutes of the match. This was the match I was most looking forward to and I don’t want to say it disappointed, but it was very mediocre and not very memorable. Action went back and forth, chaos erupted a few times, and The Bullet Club did Bullet Club things. In the end Tanahasi managed to pin Jado and the match was over. Afterwards, Tanahashi and his team performed an air guitar concert for the crowd and we all made our way out the door.


Overall I was very happy with the show. I had great seats, it was a great price for the tickets that I bought, and a fun way to spend a Monday night. That’s not to say there aren’t some issues that will no doubt hurt NJPW’s expansion in to the US.

First, the show began at 8 PM on a Monday, which is great for people traveling and I didn’t mind it. However, it was listed to last till 11 PM which makes getting to work a bit difficult on Tuesday. Despite this, the show only lasted till 9:30 PM with a total of an hour and six minutes of actual wrestling in the three hour advertised show. So, let’s say you paid $200 to sit front row for a three hour show and you got half a show, I’d be rather irked.

Second, releasing the cards after tickets going on sale is a shady move and it really sucks for us having to take a chance on New Japan providing an adequate talent pool to come here to the US.

Third, the pricing needs to be adjusted if you aren’t going to bring in all the top stars.

The railing was really close to the ring and I think this prevented much action outside the ring. There were little to no dives and while it was nice to provide such an intimate setting for the event, I think providing the wrestlers a little more room to work out have benefited the show.

Those are my only complaints, which are rather limited to be honest. It was well run, fun, and I’m glad I can say I’ve seen New Japan Pro Wrestling live. 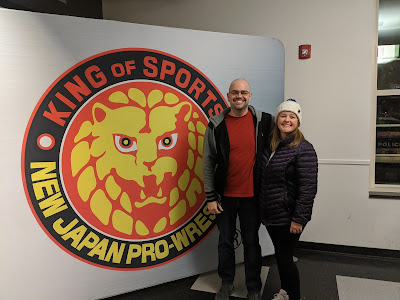