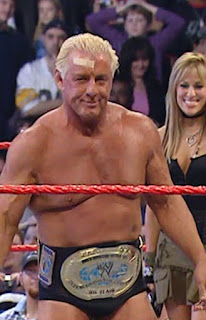 "Nature Boy" Ric Flair is one of the greatest wrestlers in the history of professional wrestling and has always been one of my all time favorites.  I have had the pleasure of meeting Mr. Flair on a few occasions and I wrote about it here. 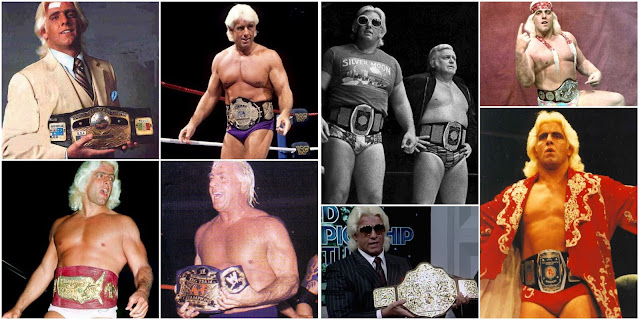 In September 2005 Flair had been back in the WWE  for almost three years, in that time he had two Tag Team title runs with Batista but his last singles reign as a champion had been five and half years earlier in WCW with a controversial day as Heavyweight Championship.  At age 56 many thought Flairs days were coming to an end, and as much as I'd hoped for one more World Championship run, his days as a champion were over.

On September 5th in Oklahoma City at the Unforgiven PPV "Nature Boy" Ric Flair opened the show against Carlito in a match for the Intercontinental Championship.  This match was set up on an edition of Carlito's Cabana where Flair was the guest and Carlito spit an apple in Flair's face before the two came to blows.

Back in early 1983 Flair wrestled Carlos Colon in a controversial series of matches where Colon allegedly won and lost the NWA World Championship to Flair in a change that was never recognized by the NWA.
On this night though in just over eleven and a half minutes and much to the surprise of those in attendance Flair submitted Carlito with his figure four leg lock to capture the championship.  Near the end of this match Flair went to the top and Carlito caught him for the usual bodyslam, but Flair punched him and then came off with a blow to Carlito's head.  The crowd popped big time and Flair raised his arms in victory, it was quite a funny moment.  The crowd erupted for the tap out. 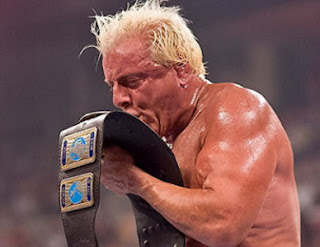 Post match Flair cut a promo about proud he was to win this prestigious championship.  That it was just as sweet as winning each of those 16 world championships. 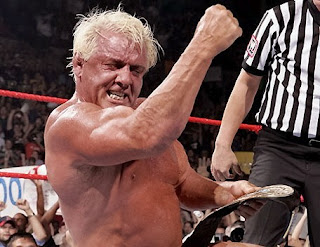 The next night on Raw in Wichita Falls, Texas Flair would retain the title in just over 20 minutes in a rematch with Carlito winning by submission with the figure four leg lock.  Flair would then begin a five month run as champion some would say his most successful run in the WWE seconded only by his final Career Threatening run in 2007 / 2008.

He wrestled on the house shows defending the title against first Carlito and then Triple H and finally against Shelton Benjamin before losing the championship to Benjamin on the February 20, 2006 Monday Night Raw in Trenton, New Jersey.  All the time he feuded on television with Triple H and Edge.

His biggest defense of this run came in San Diego at Taboo Tuesday on November 1st in a steel cage match with Triple H.  The build for this match was excellent with Hunter turning on Flair in a tag team match and busting him open with a sledge hammer shot.  Flair begged the fans to vote for a cage match between himself and Triple H at the PPV and got his wish.

The promo package played prior to the this match was tremendous.  Flair came out second to a huge ovation from the crowd.  When I think of Ric Flair what comes to mind is the Four Horsemen, the NWA Championship, and his famous bloody steel cage battles for that championship.  This match hearkened back to those matches as both men were busted open and Flair blonde hair was soaked red with blood. 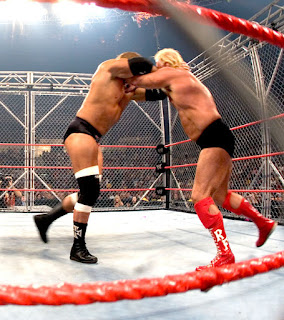 The match open quickly with both men trading blow and Flair lighting up Triple H's chest with chops.  Hunter then took over for several minutes sending Flair into the cage opening him up just a few minutes into the match.

Eventually Flair took over and sent Triple H into the busting open the game and dominating the rest of the match.  The finishe came when Flair pulled a chair into the ring and laid Triple H out with it.  He then escaped the cage getting the victory in just under 24 minutes. 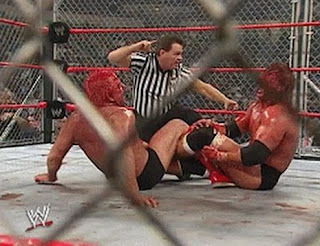 I had the opportunity to see Flair live as Intercontinental Champion at a live Monday Night Raw from TD Garden in Boston on December 12, 2005.  In an Elimination Chamber qualifying match Kurt Angle defeated Flair with the ankle lock.  Sadly none of my pictures that I took with Flair wearing the belt came out well. 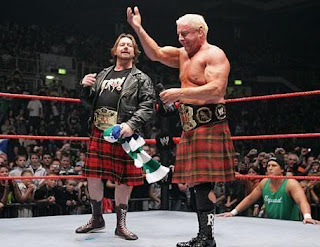 They would lose the titles eight days later at Raw from Manchester England to Rated-RKO: Edge & Randy Orton.  I'm not sure where photo above was taken but after winning the titles Flair and Pipe teamed with the Highlanders for five eight man tag matches against The Spirit Squad across the United Kingdom.