On January 18, 2018 I attended Limitless Wrestling in Westbrook, Maine.  You can read about it here.  At this show I was able to get these 13 cards signed, nine of them I brought with me the other four I bought from the wrestlers at the show. 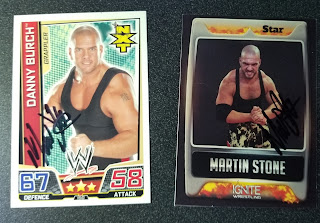 Also known as Danny Burch in NXT that is the name that the first card is under.  Released in 2013 under the Topps Europe Limited line as part of the Slam Attax Trading Card Game.  Stone himself was impressed that I had this card as he states it is quite rare with only a few being made.  I bought it on ebay from a seller in the UK.  The second card was released in 2016 as part of a set by the independent wrestling promotion Ignite Wrestling.

These cards from the Japanese wrestling promotion World of Stardom in their 2017 collection.

The first card was released in 2016 by Legacy Wrestling an independent promotion based out of Pennsylvania.  The next two cards I bought from David Starr as part of a set from the SRG Trading card game.  The middle card is his player card and the card on the right is his move card "Look At It" which is when he uses his crotch to strike an opponent in the face. 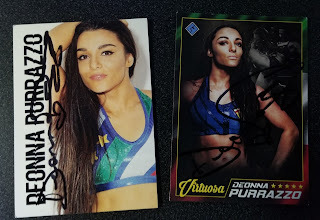 I bought both of these cards from Purrazzo herself, she sells them for $5 each and are available on her website here.  Of course after I met her I was finally able to buy one of her Stardom World cards. 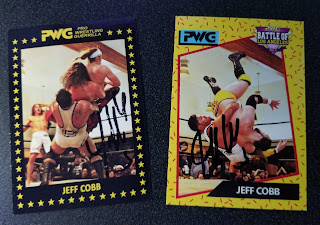 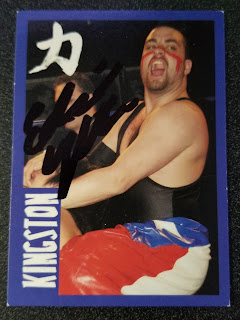 This final card was released by the Chikara wrestling promotion sometime between 2006 and 2010.  The card is not dated.  I was actually quite fortunate to get this card signed because Kingston didn't come out to sign during the show and I just happened the catch him by Ethan Page before the show.