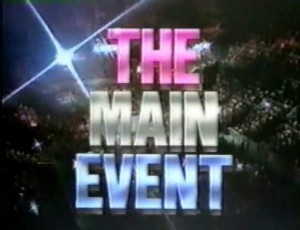 I remember it so vividly, February 5, 1988 I'm 8 years old my cousins are over and we are all in my brothers room watching The Main Event on NBC and I'm positive that Hulk Hogan is going to vanquish Andre the Giant and again retain the WWF World Heavyweight Championship! 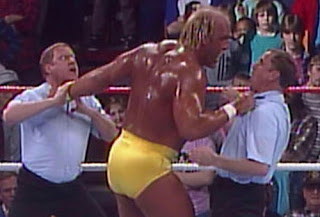 But then the unthinkable happens he loses.  But his shoulder was up!! According to Jesse Ventura the evil Ted DiBiase paid someone to have plastic surgery to look the referee to cheat Hogan out of his championship!  I was literally devastated and the rest of my evening was ruined. 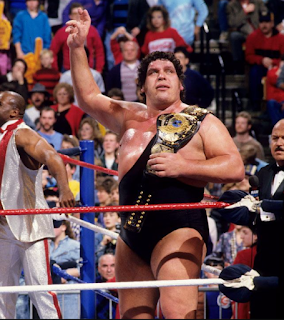 Shortly after "winning" the championship Andre surrendered it to villainous Ted DiBiase making him an unworthy champion.  This travesty of justice was rectified when on February 13th on Superstars of Wrestling President Jack Tunney declared the championship vacant.  As we all know a tournament was held at WrestleMania IV "Macho Man" Randy Savage defeated DiBiase in the finals to win his first championship. 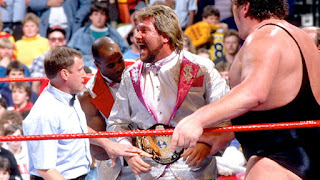 In the official history of the WWE World Heavyweight Championship on WWE.com Andre won the title on February 5th and was champion for 59 minutes.  WWE doesn't officially recognize DiBiase as champion however for at least four shows DiBiase was recognized as champion and came to the ring with the championship belt.

Thanks to the website The History of WWE here are those matches:

Hulk Hogan & Bam Bam Bigelow (w/ Sir Oliver Humperdink) defeated Ted Dibiase (w/ Virgil) & Andre the Giant at 7:59 when Hogan pinned Dibiase with the leg drop after Andre's arm became entangled in the ring ropes; prior to the bout, Dibiase came to the ring wearing the WWF World Title belt and was introduced as the new champion as a result of what occured the previous night in Indianapolis 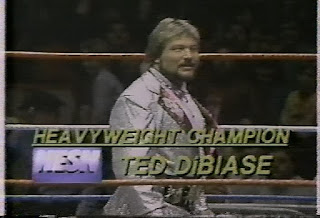 Hulk Hogan & Bam Bam Bigelow (w/ Sir Oliver Humperdink) defeated Andre the Giant & Ted Dibiase (w/ Virgil) at 9:56 when Hogan pinned Dibiase with the legdrop after Andre became tied in the ring ropes; prior to the bout, Dibiase came to the ring in possession of the world title belt and was announced as the champion