The Last Match: An Introduction


This is the introduction to my new column entitled “The Last Match” which should be pretty self-explanatory in the title as I will be exploring wrestlers last matches to the best of my ability.  I will be utilizing a variety of sources from the internet, to books, interview, and more to compile my findings.  Of course I could be wrong as sometimes matches at independent shows simply go unnoticed.  For instance back on August 21, 2009 at Unity Raceway in Unity, Maine Mr. Bob Backlund wrestled Apolo and George Fernald of Unity Raceway.  This was for NWA OnFire a promotion run by Mario Savoldi.  If I didn’t live in Maine I might never have heard about it.  Mr. Backlund has wrestled since then.


Sometimes wrestlers go out on the big stage with a celebration of an announced final match, and other times they stick around too long and end things when the bookings stop, and sadly injury or death sometimes ends a career.


I’m defining a final match as being a singles or tag team encounter, I am not including, although I will make mention of Battle Royals or matches featuring so many competitors the retiree didn’t affect the match.


Most of my posts will have some sort of theme, for instance, the first post will be the final matches of the legendary Four Horsemen. 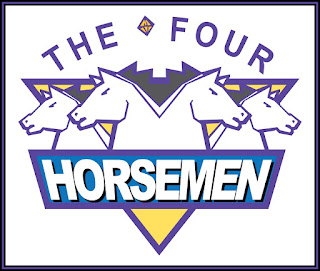 I have a curiosity of when wrestlers has their final matches, I don’t know why, I just do.  I hope you enjoy these columns as much as I do.   If you have someone you want to know their final match, please leave a comment or send me and email with the request and I will do my best to find the match and post it in a future column.